AIPAC's plans to 'come together' undone by Trump 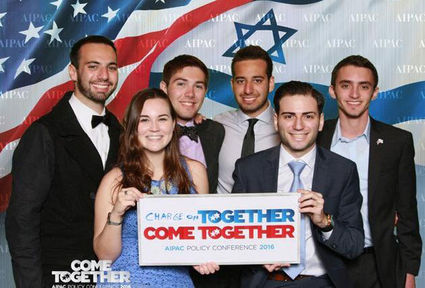 Donald Trump couldn't undo the 'come together' spirit of the UCF Knights for Israel members who attended the AIPAC Conference at the D.C. Convention Center.

There were two distinct approaches to the Trump moment last week at AIPAC's annual conference here, and there were mutual warnings that one or the other side would get burned.

The burn came fast, and it came to those who said listening to the front-runner in the race for the Republican presidential nod was the right thing to do.

After days of repeated warnings to its activists not to disrupt Trump, and to treat speakers with respect, the American Israel Public Affairs Committee leadership issued an extraordinary apology on Tuesday morning-but not to Trump.

Instead, AIPAC said it was sorry for its members who had applauded his insulting remarks about President Obama during Trump's Monday night speech at the Verizon Center. Many members roared and leapt to their feet when Trump suggested Obama was "the worst thing to ever happen to Israel."

"While we may have policy differences, we deeply respect the office of the president of the United States and our President Barack Obama," Lillian Pinkus, the lobby's newly installed president, said from the AIPAC stage, joined by other AIPAC lay and professional leaders.

"There are people in our AIPAC family who were deeply hurt last night and for that we are deeply sorry," Pinkus said, her voice choking. "We are deeply disappointed that so many people applauded a sentiment that we neither agree with or condone."

The evident anguish in the aftermath of Trump's remarks undid the hopes that his speech would not undo the prominent Israel lobby's careful claims to bipartisanship, even as its Iran policy is more or less aligned wholly with Republicans. The Trump moment came during a conference with a slogan, "Come Together," that AIPAC had hoped would signal a new day of bipartisanship.

Complaints that the lobby had given Trump a platform at its largest annual assembly without expressing official displeasure at his most controversial remarks about immigrants and Muslims led many to wonder how AIPAC would function in an election in which the likely GOP nominee has alienated much of the organized Jewish community.

AIPAC officials said before the conference that the event would be an opportunity for Trump, derided by his rivals for speaking mostly in vagaries, to finally attach substance to his ideas. Trump's prepared remarks included substantive and critical assessments of Obama's Middle East policies, which AIPAC expected and indeed would have welcomed.

He also softened two positions that have created unease among pro-Israel activists-insisting he would remain neutral in brokering peace between Israel and the Palestinians, saying his negotiating skills as a businessman would be key to reaching a deal, and refusing to commit to recognizing Jerusalem as Israel's capital.

On Jerusalem, Trump vowed to move the American embassy to the city, "the eternal capital of the Jewish people." And he said the Palestinians must accept as a given the closeness of the U.S.-Israel relationship.

His extemporized flourishes, however, typified the red meat he likes to throw out at his rallies, and many in the massive Verizon Center hall, chosen to accommodate a record-breaking 18,000 activists this year, gobbled it up.

Launching a critique of Obama's U.N. policy, Trump started a sentence Monday evening by saying, "With President Obama in his final year"-then stopped himself and said "Yay!"

Cheers, laughter and applause arose from the crowd, and not just from isolated pockets.

The largest group advocating some form of protest ahead of Trump's appearance, the Reform movement, sounded a note of vindication the day after his speech.

"We were disappointed but not surprised that Mr. Trump did nothing tonight to allay our deep concerns about his campaign," Rabbi Rick Jacobs, the president of the Union of Reform Judaism, said in a statement Monday. "It still seems that he does not share our values of equality, pluralism, and humility."

Trump's laceration of Obama is the last thing AIPAC needed at a time when the lobby is endeavoring to show it remains a bipartisan enterprise.

Hoard Kohr, the one-time Republican operative who has led the organization for decades, alluded in his opening remarks on Sunday to pressure from the right to simply give up on Democrats in the wake of the party's almost wholesale embrace of an Iran nuclear deal that AIPAC continues to insist endangers Israel.

"There are those who question our bipartisan approach to political advocacy," Kohr said. "Unless one party controls all branches of government forever, bipartisanship remains the only way."

There were warm welcomes for Democrats at the conference, particularly Vice President Joe Biden, the closest administration member to AIPAC, who spoke of his decades of attachment to Israel in emotional terms.

Hillary Clinton, the Democratic front-runner, also spoke-earlier in the day than Trump-pitching herself to his right on Israel.

"American can't ever be neutral when it comes to Israel's security and survival," Clinton said to repeated cheers and applause. "Some things aren't negotiable and anyone who doesn't understand that has no business in being our president."

Yet it was clear the lobby still had difficulties in reconciling with Democrats, especially progressives among them. Only one Democrat from the vast majority in Congress who voted last year in favor of the Iran deal-Maryland Rep. Steny Hoyer, the minority whip-addressed the conference.

Hoyer's appearance together with Rep. Kevin McCarthy, R-Calif., the majority leader, was designed to show bipartisan support for Israel, yet tension crept into the buddy show. When McCarthy suggested that the Obama administration had sowed "doubt" about the U.S.-Israel relationship, Hoyer countered that the two nations' security establishments "are cooperating as closely today as they have in the past."

AIPAC's activists, lobbying on Tuesday, were unable to recommend any specific legislation on Iran; there is none suitable that is backed by both parties.

Bernie Sanders, the Independent from Vermont challenging Clinton for the Democratic nod, did not attend because he was in the West ahead of three primaries in the region on Tuesday. He offered to deliver remarks via video link but was rejected by AIPAC. Sanders did deliver the remarks-at a Utah rally-with his consistent message of support for Israel tempered by criticism of its actions on settlements and in waging war. 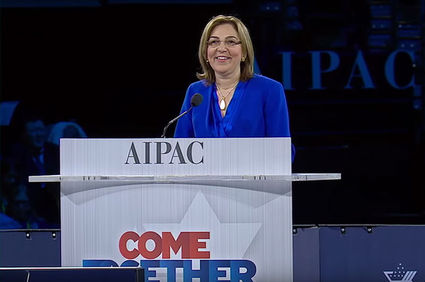 Aiming to appeal to progressives, the lobby screened a video presentation Tuesday morning on Menachem Creditor, a rabbi from Berkeley, California, who is a progressive leader and supporter of AIPAC.

Such profiles of AIPAC members are usually followed by short live appearances by the subjects, who usually deliver a few inspiring words of thanks.

Creditor presented his prepared remarks and added an indirect swipe at Trump, telling JTA after his address that he was prompted to the changes not just by Trump's speech but by the applause it earned.

"We must not embrace the politics of hate," he told the AIPAC crowd, appearing immediately after Pinkus' apology.

"AIPAC's commitment to bipartisanship isn't just about being mensches in the world. The only way to keep Israel strong and to build a beloved community here in the United States is to regard the multiplicity of voices here and in our nation as sacred."