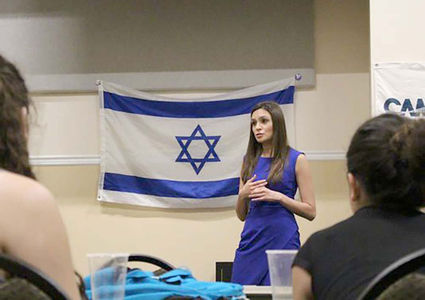 American journalist Liz Wahl was welcomed by the University of Central Florida pro-Israel student group Knights for Israel on the evening of March 28, where she discussed the seriousness of world media's heavy hand in global action on many issues, including in the ongoing Israeli-Palestinian conflict.

Wahl has experience with this media power, be that power positive or negative, as she gained notoriety for resigning from the often challenged news agency Russia Today in the midst of their extremely biased coverage of Russia's war with Ukraine in the Crimean Peninsula. She interrupted her normal newscast and resigned live, on-air, while denouncing RT's "active censoring of facts," on March 5, 2014.

At UCF, the March 28 program began with showing a short documentary featuring Wahl and created in cooperation with Jerusalem U, a Jewish Educational Organization, called "Media 101: Reading Between the Lines." The film covers a trip that Wahl took to Israel, where she investigated the media bias in the world's coverage of the Israeli-Palestinian conflict.

What Wahl found in her Israel trip was that the accurate story out of the Middle East is so much more complex than that which is presented by world media. As she emphasized, "It's just so complicated." In the Jerusalem U documentary, Wahl interviewed fellow journalists who echoed her sentiments, including former Associated Press correspondent Matti Friedman.

Friedman emphasized the obscenely disproportionate media coverage given to Israel and the Palestinians' conflict, versus, say, Afghanistan, and stated that the reason for this media obsession is that, in Israel, it is precisely such the opposite of the common, oversimplified narrative- and safe- so that the story is able to be spun as an "easy conflict to cover," with a story of a "David and Goliath" that is just so attractive to the collective reasoning of world media.

Wahl's solution to this serious problem of global action falling prey to journalistic convenience centers on the appropriate wielding of the acronym "CLUMSY"-Censorship, Local Fixers, Unconscious biases, Media outlets, Social Media and You-and these elements represent the forces that interact to shape a story.

According to Wahl, through the understanding of these six roles, we "all can play a part in being an active user" of world media and counteracting the self-destructive tendencies inherent in ignoring the truth. As Wahl stated, citing the Russian propaganda effort in their war against Ukraine, "Media can be a weapon."

Part of the push bringing Wahl went from RT to Israel, as featured in the Jerusalem U documentary, was the fact that in the wake of her resignation from RT she was accused of being a part of a, variously termed "neocon," Zionist and/or Jewish plot. She is not a member of such plot and no such entity exists, but she was intrigued as to how such blatant bias that disregarded the truth would surface, leading to her collaboration with Jerusalem U.

Wahl also took questions from the audience, discussing her own personal background knowledge of the Israeli-Palestinian conflict, which she termed as "basic" prior to her Israel visit, and she also answered to the important question of whether journalists can or should ever be definitive in their personal stance on certain issues. According to Wahl, the answer to the latter question is definitely yes, since some things are so "morally egregious" that journalists "must" take a stand.

Special thanks goes to Ben Suster and Knights for Israel, and Jerusalem U, CAMERA on Campus, and the Zionist Organization of America, who all worked together to bring Wahl to Central Florida. After UCF, Wahl went on to the University of South Florida, where she continued her efforts to spread awareness of media bias and appropriate ways to confront such bias.

Caleb R. Newton is a global affairs analyst living in Central Florida and the founder of Global News Breakdown. Find him at Bipartisan Report, Dissecting Society, and the Times of Israel. Contact him at calebrnewton@globalnewsbreakdown.com.