Special needs program in Cleveland gives to programs in Orlando 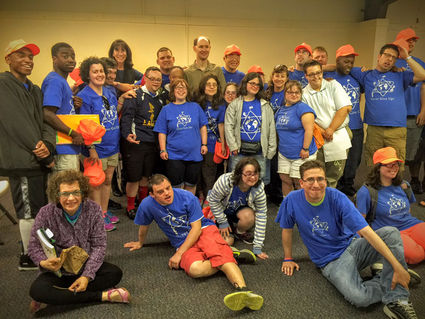 YouthAbility from the JFSA in Cleveland, performed at Lakewood Center in Fern Park and OCA Orlando. Standing among the singers are Loren London, back row; Chris Dawson, back row, center, in the olive shirt; and Cameron Rohme, front row, standing, in white shirt.

"Can our group perform for RAISE or another venue when we come to Orlando next year?" asked Solomon.

London explained to Solomon that RAISE is a work program for people with special needs, but she would look into finding a place for YouthAbility to perform.

After seeing a video online of YouthAbility's performance, two area venues came to mind: Lakewood Center in Fern Park and OCA Orlando. London called both. Lakewood Center, a facility whose mission is to enhance the quality of life for adults with special needs, immediately said yes. OCA (Opportunity, Community, Ability) offers opportunities to school-aged children and adults with autism and other disabilities to engage in age-appropriate activities with their peers. Its executive director, Silvia Haas, also was thrilled to invite YouthAbility to come perform.

While they were here, several YouthAbility young people wanted to attend a Purim service. London made arrangements with Rabbi Dubov of Chabad, who was happy to have them come.

JFSA's Horvitz YouthAbility program is a social engagement program that serves disabled and at-risk youth by involving them in volunteer service, vocational activities, and social enrichment. It is funded by The Richard Horvitz and Erica Hartman-Horvitz Endowment Fund, and is the only program of its kind in the United States.

YouthAbility participants help themselves by helping others. During the year, the group raises funds through social entrepreneurial projects such as gift wrapping; selling oranges and challah; creating and boxing cards; car washes and other community service. Participants in the program learn money-making skills as well as philanthropy. In fact, because they are grateful for the Cleveland Federation's support, the group makes a donation to its annual campaign every year.

"They feel empowered by making these donations and responsible for helping others," said Solomon, who has been with the program since 2005.

One of YouthAbility's features is its learning trips that give participants the opportunity to entertain other special needs groups throughout the country as well as perform volunteer activities with other nonprofit organizations. In the past seven years, they have traveled to Washington, D.C. where they attended meetings on Capitol Hill; Israel (they've been twice); Philadelphia; New Orleans and other cities. With the money they have raised through fundraisers, the group chooses programs to whom they would like to offer a grant.

This year, they came to Central Florida and gave grants to RAISE, OCA Orlando and Give Kids the World.

Solomon asked each organization to give a presentation about their nonprofit.

London agreed to a short, 10-minute presentation about the RAISE program. She also invited two participants in the program to talk about their experiences in RAISE: Chris Dawson, a current employee; and Cameron Rohme, who has moved on to gainful employment outside the program.

After the YouthAbility performance, (which was "incredibly moving," London said) she, Chris and Cameron gave their presentations, followed by a Q&A in which the YouthAbility members asked many direct questions about the program, including specific financial questions like how much does each employee get paid? Is it every week?

After the questions, the YouthAbility group went aside to discuss how much they would give to the RAISE program. While they were convening, Barbara Chasnov, a RAISE senior job coach, who came to see the performance and specifically to hear Cameron's talk (she was his job coach while he worked in the RAISE program and also helped him write his part of the presentation), stood up and stated, "I would like to match whatever amount of money today the YouthAbility group is willing to donate!"

The full-to-capacity audience was stunned, and as an overwhelmed London thanked her, Chasnov explained, "At Choices this year, Alan Ginsburg offered to match new and increased gifts given at the event to our annual campaign. This amazingly generous offer was so inspiring to me, that when I saw the YouthAbility performance and their offer to donate to our RAISE program, I thought that I would like to match their gift. It was an easy decision and perhaps when the opportunity arises for others to match gifts, they will remember this gesture."

The YouthAbility group then presented a check to RAISE for $700.

YouthAbility gave a total of $2000 in grants to the three nonprofits: $500 to Give Kids the World; and $800 to OCA Orlando. The young people made the determinations themselves.

London was thrilled because not only was this a meaningful program for everyone involved, but it was an opportunity to build community across the miles.

Speaking of RAISE, London said, "Everything is as good if not better since we just celebrated our second anniversary. It has been four years since its inception with delivery of service for two years now."

There are now 15 job coaches onboard-10 active and five substitutes.

"We continue to have and get new really dedicated job coaches who take it on and own it and continue to work with our program over and over," said a very grateful London.

Incidentally, next Wednesday, April 27, RAISE once again will host a Passover seder at the Lakewood Center for their Jewish residents.