Come on, get happy and leave the Theater at the J singing 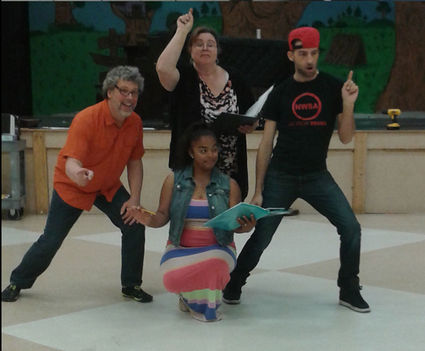 The Cast of "The Wonderful Wizard of Song" finish a musical number in a recent rehearsal. Shown here (l-r): David Kay, Amanda Hudson Giese (in back), Desiree Perez (in front), and Chris McCabe.

Any fan of the Great American Songbook could hum a few bars of "Over the Rainbow," "Get Happy," "Stormy Weather," "It's Only a Paper Moon," "I've Got the World on a String," or "That Old Black Magic" without having to think too hard. And yet, the composer of those songs and many more remains known to very few. Harold Arlen wrote over 400 songs, had many major hits, won an Oscar, and was called "the most original of all of us" by none other than George Gershwin, but he never became a household name.

Born a cantor's son in Buffalo, New York, Hymen Arluck wrote some of the greatest hits from the 30s and 40s, including the entire score to the classic movie, "The Wizard of Oz." The songs listed above are just some of the standards that live on today and have distinguished Harold Arlen as one of the great American composers of the 20th century.

The Theater at the J will present five performances of his life and his music at The Roth Family Jewish Community Center of Greater Orlando from May 5-15. Some of Orlando's best singers and performers will be joined onstage by a trio of some of Orlando's best musicians to perform a sampling of the music that makes us all want to sing along.

David Kay, rabbi at Congregation Ohev Shalom and the actor who delighted all of us in "A Funny Thing Happened on the Way to the Forum" and "Fiddler on the Roof," will be reunited with Forum and Fiddler cast mate Amanda Hudson Giese as well as Desiree Perez and Chris McCabe to sing this beautiful music. David Foust, musical director for hundreds of shows, including the recent "The Sound of Music" for CFC Arts and the critically acclaimed "Hands on a Hardbody" at the Garden Theatre this winter, plays and conducts this cast and band. The show was written by and directed by Kerry A. Giese who was the director for Forum, Fiddler, last fall's "Kindertransport," and recently, "The Fabulous Lipitones" at the Theater at the J.

"The Wonderful Wizard of Song-An Evening with Harold Arlen" opened last evening, and additional performances will be on Saturdays, May 7 and 14 at 9 p.m. and Sundays, May 8 and 15 at 3 p.m. Ticket prices at the theater have been recently reduced. Tickets in the front four rows are only $20 each. A little farther back and tickets are only $15 and $10. Tickets may be reserved at orlandojcc.org/theater.