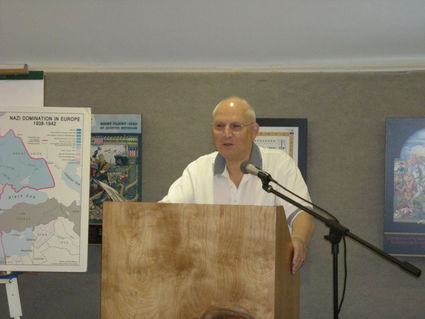 The Holocaust Center's series, I Remember: Eyewitnesses to the Holocaust, will continue on Sunday, May 22 at 2 p.m. The event will feature survivor Harry Lowenstein speaking at the Center in Maitland.

Lowenstein was born in Fuerstnau, Germany, in 1931, the younger of two children. At age 9, Harry, along with 20 family members, went to live in the Riga ghetto, where they were crowded into a two-room apartment. A year and a half later, he was taken to the concentration camp of Riga-Kaiser Walt. While they were there, Lowenstein 's father fell ill and was taken back to the Riga ghetto and then to Treblinka. Lowenstein, his mother and older sister were transferred to the Stutthoff concentration camp in Poland.

Lowenstein often shares his first-person account of his life before and after the Nazis took control of the government. His story is particularly engaging to students, who find it difficult to picture what it might have been like to survive the brutality he faced in his childhood.

After the war ended, Lowenstein made his way to Paris. In early 1949 he was able to come to the United States. He arrived nearly penniless, but had relatives here who helped him begin his new life here.

Lowenstein and his wife, Carol, are founding members of Congregation Shalom Aleichem in Kissimmee, where they ran Goold's Department Store for many years.