'No statute of limitations on genocide,' Nuremberg anniversary confab reminds 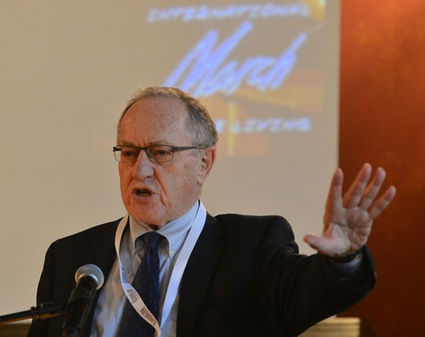 Human rights lawyer and pro-Israel advocate Alan Dershowitz speaks at "The Double Entendre of Nuremberg" symposium on May 4 at Jagiellonian University in Kraków, Poland.

Why should the casual observer care about the seemingly obvious need to prosecute and convict Nazi war criminals, whether it be during the Nuremberg trials of the 1940s or similar proceedings in more recent years?

"The Nuremberg trials only convicted the leaders and a relatively small number of people," retired Harvard Law School professor Alan Dershowitz told JNS.org. "Even for the trials that occurred thereafter, we're talking about just hundreds of people... and for years they were protected. And there's no statute of limitations on genocide and war crimes. So it's very important that everybody in the world who is contemplating committing genocide understand that they will never be able to live out their life without being held legally accountable."

Dershowitz and Irwin Cotler, renowned human rights attorneys and pro-Israel advocates, took center stage in Poland this week at an event that looked back on the Nuremberg trials and extracted lessons for the future. In Kraków on March 4-the eve of Yom HaShoah (Holocaust Remembrance Day)-Jagiellonian University, March of the Living International, and the Raoul Wallenberg Centre for Human Rights hosted "The Double Entendre of Nuremberg: The Nuremberg of Hate, The Nuremberg of Justice." The symposium was held to mark the 80th anniversary of Nazi Germany's anti-Semitic Nuremberg Laws and the 70th anniversary of the Nuremberg trials-the Allied forces' military trials of 13 prominent Nazi leaders. While the Nuremberg Laws were a precursor to the Holocaust, the trials served as a foundation for contemporary international humanitarian law.

"I think that people today must concern themselves with the struggle against impunity," Cotler told JNS.org. "The 20th century was not only the age of atrocity, it was also the age of impunity. Few of the perpetrators were brought to justice. And so, just as there must not be any base or sanctuary for racism and hate, because that takes you down the road to mass atrocity, so there must not be any base or sanctuary for these war criminals....We've learned that if you do not bring war criminals to justice, what you do is you not only encourage impunity, you embolden the war criminals and you encourage more war crimes."

Now in its 28th year, March of the Living is an educational program that brings youths and adults from around the world on two-week trips to Poland and Israel "in order to study the history of the Holocaust and to examine the roots of prejudice, intolerance, and hate." The "march" itself is a 1.86-mile walk from Auschwitz to Birkenau as a silent tribute to victims of the Holocaust. To date, the program has drawn 220,000 participants. Dr. Shmuel Rosenman, chairman of March of the Living International, said the theme of justice infused into this year's program reflects the annual objective of adding an "extra touch" to the educational journey.

"No one March of the Living is a routine," Rosenman told JNS.org. "This year, we're talking about the Nuremberg Laws and the Nuremberg trials. A year before it was the 70th anniversary of the destruction of Hungarian Jewry. We had a train of students riding on the same path from Budapest to Auschwitz [that concentration camp prisoners traveled]. The year before, it was the year of liberators. One-hundred liberators came [to the March of the Living program]. So every year, we are trying to bring certain things that give an extra touch, in spite of the fact that the Holocaust does not need an extra touch. It speaks for itself. But we are running out-unfortunately-of survivors, so you have to bring something more into [the trip] in order to make it more interesting to the young generation."

How can the young generation connect with the particular theme of justice?

"I think everyone-age 16, 17, 20, 30, 40-knows that in our world, you don't see much justice being done. So if you are taking the Nuremberg Laws, you are going to find that during the last 70 years, not much changed," said Rosenman.

Cotler told reporters in a pre-symposium briefing that there are two often-ignored lessons which are "central to this historic juncture"-first, that the Holocaust and other genocides occur as a result of "state-sanctioned incitement to hate," and second, that genocide is enabled by "indifference and inaction" on the part of international bystanders.

Dershowitz warned of what he described as the expiration of a "70-year-old statute of limitations against anti-Semitism." While the wrongs of the Holocaust meant that Jews earned the right not be vilified, that right has seemingly evaporated on college campuses today, Dershowitz told reporters. The young generation doesn't "remember the kind of bigotry that we had," he said, paving the way for the emergence of the "new anti-Semitism"-the targeting of one nation and one group of people, Israel and the Jews.

Asked if there is a link between the Holocaust and the modern Boycott, Divestment and Sanctions (BDS) movement against Israel, Dershowitz argued that there is actually "no such thing as a BDS movement."

"[BDS] starts by focusing on Israel, and then asks, 'What tactics can we use?'" said Dershowitz, emphasizing that BDS must be fought like any form of anti-Semitism.

Cotler-Canada's former justice minister and attorney general-recalled being present at the 2001 World Conference against Racism in Durban, South Africa, describing that conference as "the creation of BDS" despite the movement's official formation in 2005. A prominent modern anti-Zionist narrative was born in Durban in 2001, explained Cotler, with marches in the streets conflating the dismantling of South Africa's apartheid state with the desire to dismantle the "apartheid state" of Israel. Cotler said that today's Jewish college students have told him about how they are unable to fully participate in the fight against discrimination in all its forms because the BDS movement stereotypes them as "part of the white privileged class."

Asked if post-Holocaust declarations of "never again" can have any practical impact, Dershowitz responded that one "has to use every resource available to fight against bigotry," including the tactics employed by the Nuremberg symposium in Kraków-moral suasion and statements by well-respected leaders. Cotler expressed hope that the symposium would help encourage parliamentarians from around the world to follow Canada's lead in officially recognizing the link between anti-Zionism and anti-Semitism. Dershowitz, similarly, said it would be a significant step forward if more nations adopted the U.S. State Department's definition of anti-Semitism, which acknowledges that anti-Semitism can include the demonization of Israel, delegitimization of Israel, and application of double standards to Israel.

As part of a panel of current and former justice ministers, Israeli Minister of Justice Ayelet Shaked echoed the symposium's "double entendre" theme by emphasizing that while jurists and legal experts sanctioned the dehumanization of Jews through drafting the Nuremberg laws, legal experts also proceeded to design the corrective-the Nuremberg trials.

"[The law] can lead to the abyss, but also make amendments," Shaked said.

In Europe, both physical and media attacks against Jews prove how "the continent that should have learned its lesson" from the Holocaust has not done so, she said. Commenting on the ongoing anti-Semitism scandal within the British Labour Party, Shaked noted how suspended Labour lawmaker Naz Shah apologized for posting on Facebook that Israel should be "relocated" to the United States, but that former London mayor Ken Livingstone has not retracted his comments suggesting Hitler was a Zionist. Shaked said Labour Party leader Jeremy Corbyn "must clarify that anti-Semitic comments are not within legitimate political debate, and that anti-Semitic views should end a politician's career and disqualify from any future public office."

"And European leaders should also heed the British lesson and affirm that anti-Semitism is unacceptable," said Shaked.

"Israel is proud to be part of the international community and is committed to the success of international institutions. But we will not compromise our sovereignty," she added. 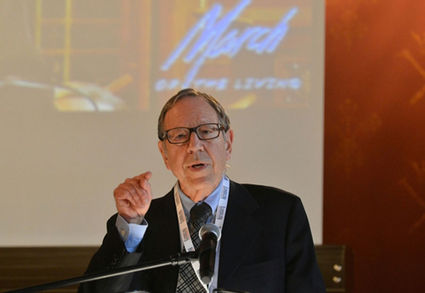 Former Canadian justice minister and attorney general Irwin Cotler speaks at "The Double Entendre of Nuremberg" symposium on May 4 at Jagiellonian University in Kraków, Poland.

The Nuremberg trials' landmark achievement was that "leaders were accountable for massive atrocities" for the first time," Ocampo said.

"Before Nuremberg, it was considered a right of sovereign nations to kill people in their own country," he said. "After Nuremberg, that was impossible."

At its conclusion, the symposium adopted a comprehensive "Never Again" declaration.