Sykes-Picot at 100: Mideast chaos highlights the perils of drawing borders 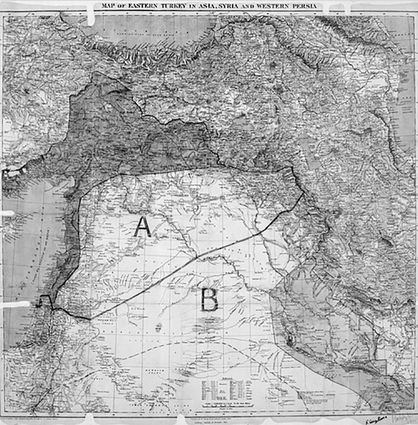 The original map of the 1916 Sykes-Picot Agreement.

A century later, the Middle East-with an explosive array of conflicts, including an ongoing civil war in Syria that has seen hundreds of thousands of deaths-is still experiencing the aftershocks of the 1916 Sykes-Picot pact. Scholars tackled the subject earlier this month at a conference hosted by the Jerusalem Center for Public Affairs (JCPA) think tank.

Brig.-Gen. (res.) Yossi Kuperwasser-director of JCPA's Project on Regional Middle East Developments, former director general of Israel's Ministry of Strategic Affairs, and a former senior officer in Israeli military intelligence-explained in a policy paper that Sykes-Picot failed because it was drawn up not with the Middle East's interests in mind, but with a mixture of British and French interests.

The goals of Mark Sykes and François Marie Denis Georges-Picot in dividing the territories had "less to do with establishing peaceful, stable Arab nations and more to do with furthering their own nations' ambitions and strategical interests," elaborated former Israeli ambassador to Canada Alan Baker-director of JCPA's Institute for Contemporary Affairs-in the same policy paper, quoting a 2014 report by the Los Angeles Daily News. "Britain was particularly interested in access to petroleum in Iraq. France, for their part, wanted access to Mediterranean harbor cities like Beirut," noted Baker.

The secret map drawn up by Sykes and Picot established the geography for French and British colonial rule and influence. It also established new national borders, failing to take into account the local people, demographics, or socio-cultural and religious aspects of the territories they divided.

"Sykes-Picot is a sensitive subject that generally cuts across ideological lines in Turkey," said Dr. Ahmet K. Han, an associate professor at Kadir Has University in Istanbul, who spoke at the recent JCPA conference in Jerusalem. "Sykes-Picot for Turkey is...the name of an agonizing process rather than an agreement that marked lines on the sand in the lost Middle Eastern lands of the Ottoman's... Sykes-Picot is an agreement that represents a chain on Turkey's ankles."

James A. Paul-author of the 1991 book "Syria Unmasked" and former executive director of the Global Policy Forum, a think tank that monitors the United Nations-told JNS.org that Sykes and Picot did so many things wrong that "it is hard to count them." One of the consequences of those "mistakes," he said, is what is known today as the Israeli-Palestinian conflict.

"While dividing up the Middle East... the British were also promising the Arabs an independent state were they to fight on the British side against the Ottoman Empire," said Paul. "Of course, [soon after] there was the [1917] Balfour Declaration promising the Jews a homeland. Even that was an act of deception. The British knew they were going to take over all of that real estate, they knew they were going to rule that area once the war was over."

Another result of Sykes-Picot, Paul explained, was the rise of modern nationalism-the idea that states should be linguistically, ethnically, and perhaps even religiously pure.

"When people start talking about fixing Sykes-Picot or the subsequent treaties like the [1920] Treaty of Sèvres or the [1923] Treaty of Lausanne, they are often talking about drawing up new borders," Paul said. "It is the idea that the situation could be improved by creating an independent Kurdistan or whatever. But every time you create a state that is supposedly based on ethnic purity, you find within it there is yet another group without a state of their own."

Paul contends that too much nationalism is "not a good thing." He said that diverse people need to learn to live together-like in the United States-and that the contemporary scenario of tiny states, states that keep getting smaller, leads to economic instability and flies in the face of today's globalization trends. He offered the example of Iraq, which many in the American political establishment were keen on diving into three segments: Kurdistan (for the Kurdish people), Sunnistan (for Sunni Muslims), and Shiastan (for Shi'a Muslims), so to speak.

"For people who have never been to Iraq, this sounds like a good idea," said Paul. "People write about the age-old hatred between Sunnis and Shi'as. But in fact, in countries like Iraq, there are a lot of families with Shi'a and Sunni members, and Bagdad is a mixed city. What do you do with a mixed city?"

He continued, "Sometimes people live together harmoniously for very long periods of time and Western culture insists that these people were constantly at war, constantly hating each other, and it is just not true. When we circle back to Sykes-Picot and all these borders, and we say we are going to fix them now, I say, 'Watch out. It could be even worse this time.'"

But the alternative might not be any better, according to JCPA's Kuperwasser. While the Sykes-Picot map remained more or less unchanged for 95 years, the "Arab Spring" uprisings of 2011 began to unravel the autocratic systems established in 1916, and religious and primordial loyalties are now competing to fill the void. The most well-known element in this chaotic mix is radical Islam, which adheres to the idea that Islam should erase existing borders in favor of Islamic religious rule throughout the Middle East and beyond.

"All factions of radical Islam deny the idea of nationalism in general and of local nationalism in particular," wrote Kuperwasser, noting that all streams of radical Islam are committed to establishing a caliphate (area ruled by an Islamic religious leader) across Muslim-populated areas (including Israel) and later, throughout the entire world. Those who Kuperwasser described as "realists-radicals," however, believe that the time is not yet ripe to establish a caliphate and that some local national identity may actually help in mobilizing Islamic activists. "Realists-radicals" also contend that while the West is continuously losing power, it is not yet weak enough to be defeated.

"From Israel's point of view, this new situation is extremely challenging and dangerous," Kuperwasser wrote. "This phenomenon may grow significantly in the future if [Islamists] manage to keep eroding the pragmatic regimes control of their territories."

"We in the West don't know how to solve the problems in the Middle East-they are beyond our capacity, wisdom, and knowledge," he said.

"The drawing and redrawing of borders," said Paul, "is not the way to go."