Christian Zionist film enlists humor in the fight against BDS 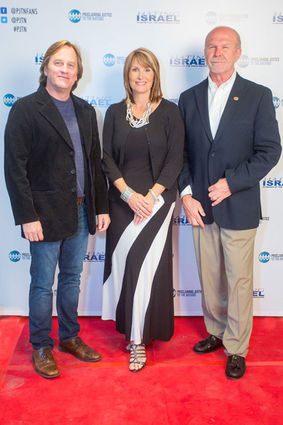 From left to right, comedian Brad Stine, producer Laurie Cardoza-Moore, and director Stan Moore at the June 8 Jerusalem premiere of the film 'Hating Israel: In Search of the Truth Behind BDS.'

"When it comes to apartheid, Israel sucks."

It's a key quote delivered by American comedian Brad Stine, a devout Christian and a featured personality in a new documentary film called "Hating Israel: In Search of the Truth Behind BDS."

The premiere of the 90-minute film produced by Laurie Cardoza-Moore, founder and president of the Christian Zionist organization Proclaiming Justice to the Nations (PJTN), was held in Jerusalem on June 8, in front of an audience of Knesset members, Israel advocates, business leaders, journalists, and other VIP guests.

Cardoza-Moore describes the film's style as "docutainment"-an entertaining documentary-and says it is aimed primarily at millennials (those born from the early 1980s until around 2000). Stine shapes his opinions on the Israeli-Palestinian conflict while traveling throughout Israel and the Palestinian Authority (PA)-controlled territories. He carries out a series of interviews with Jews, Christians, and Muslims to get their thoughts about what life is really like. Through his journey, he comes to the conclusion that labeling Israel as an "apartheid state" is preposterous.

During the "Seinfeld"-like film-which includes commentary, interviews, and visuals from headline news-Stine's interviews are interspersed with footage of the comedian revealing his findings during a stand-up comedy routine in the U.S.

One of the highlights features Stine speaking to Palestinian workers in factories and other businesses in Judea and Samaria. The Palestinians, who work side-by-side with Jews, express their gratitude for being able to make a living thanks to their Israeli bosses.

An Israeli Arab interviewed by Stine praises his Israeli doctors and the medical staff at a local hospital, where he was bedridden for more than a year while being treated for an illness.

After debunking the "apartheid" myth, the film then focuses on the anti-Israel Boycott, Divestment and Sanctions movement, as Stine conducts interviews with experts outside of the United Nations in New York and with college students in California. Hollywood personalities, academics, and others are then seen throwing away their computers, cell phones, and other technologically advanced devices-a plea to BDS supporters to stop being hypocrites, since most of the devices were made with Israeli technology.

After clips highlighting how as a result of the BDS movement, American-Jewish college students fear for their safety if they publicly support Israel, the film showcases images of swastikas painted on Jewish students' mailboxes on a U.S. campus intertwined with images from Kristallnacht in 1938 Nazi Germany, during which 1,000 synagogues and 7,000 Jewish-owned businesses were destroyed in a precursor to the Holocaust.

Cardoza-Moore says the Kristallnacht images were chosen for the film because she believes the BDS movement is without a doubt the latest form of anti-Semitism. She says her organization, PJTN, is committed to "educating Christians against the rise of this anti-Semitism ... .We decided to produce the movie to combat BDS because the movement is growing and we must reach the next generation."

Most disconcerting to Cardoza-Moore is a recent Ipsos survey showing that 33 percent of Americans believe that supporting a boycott of Israel is justified.

"This must be combated," she says.

In addition to producing the film, Cardoza-Moore notes that PJTN is fighting BDS on other fronts, such as the organization's drafting of the state of Tennessee's anti-BDS resolution. In April 2015, Tennessee's General Assembly was the first state in the U.S. to pass such a measure, and state-level legislation against BDS have now become a nationwide trend.

Toward the end of the film, Stine speaks about the new phenomenon of some historically pro-Israel evangelical Christian groups showing their support for BDS. Cardoza-Moore calls it "a dangerous trend that even evangelicals are preaching this heresy, which is not based in scripture." She adds that in the film, Stine's journey "exposes these evangelical and world leaders pushing this unbiblical narrative."

Speaking with JNS.org at the premiere, the film's director Stan Moore, Laurie Cardoza-Moore's husband and a two-time Emmy winning director, says he believes a key point in the picture is when Stine is given a tour of the PA-controlled Balata refugee camp by Ari Briggs, director of the Israeli legal advocacy organization Regavim. Briggs shows Stine how the PA leadership deliberately keeps its people in squalor as political pawns to fight against Israel, instead of allowing them to improve their living conditions.

Stine believes the film will resonate with viewers because of its use of comedy.

"Humor helps people 'take the medicine' of a documentary," he says, adding that he feels comedy "is a package which can deliver important messages, especially on difficult issues."

Stine says he has always witnessed the power of the arts in sharing and shaping messages, but felt that mainly a left-leaning perspective was promoted using this platform. Therefore, he decided that "as a conservative, I knew I could access the arts...and I could give equal dignity to the other side." He adds that his target audience is viewers who are "in the middle-the uneducated or for whom [Israel] doesn't matter."

Following the Jerusalem premiere, Cardoza-Moore says the film will have its global release in the fall and will ultimately reach 950 million viewers through PJTN's media partnerships. The film will be screened on college campuses, before civic groups, and for churches and synagogues.

"The trend showing that 33 percent of Americans support BDS against Israel shows how important it is that we confront this head on and crush it," says Cardoza-Moore. "We have to crush it."