What does the U.K.'s vote on EU membership mean for Jews and Israel? 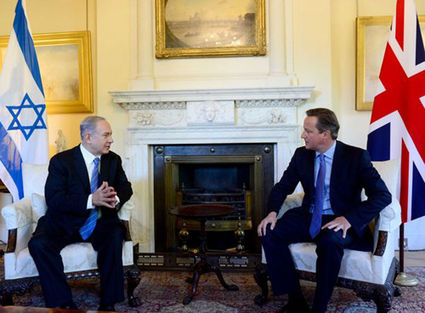 Once controlling an empire spanning every continent, the United Kingdom has been undergoing an identity crisis in recent years. In 2014, Scotland, which has been part of the United Kingdom for over 300 years, held a referendum on whether to remain part of the country. Now in 2016, after years of discontent with the European Union (EU), the British people will decide on whether or not to leave the 28-country bloc in a June 23 referendum.

For the British-Jewish community, which has faced growing anti-Semitism and anti-Zionism both within the U.K. and the EU, the decision holds a wide range of implications. Standing at roughly a quarter million people, the British-Jewish community is the second largest in Europe behind France. Despite its relatively small size, only comprising about 0.5 percent of the U.K.'s population, the Jewish community has had outsized influence on the country with many leading business and political figures of Jewish descent.

"Like the rest of the population, the Jewish community is really divided. You got some people who support [the] Labour [party] and they want to stay in and some people who want to go out. There really isn't a clear picture of it," James Sorene, CEO of the Britain Israel Communications and Research Centre (BICOM), told JNS.org.

The referendum on European Union membership, which is commonly referred to as the "Brexit," was a campaign promise by Prime Minister David Cameron during the country's 2015 national election. Due to their geography and history, the British people have always had a separate identity from the rest of Europe. As such, there has been a growing resentment within the country towards the EU in recent years. Much of this resentment has been channeled by far-right political parties such as the U.K. Independence Party, which calls for the country's exit from the EU, and even a large share of Cameron's Conservative party.

Many who favor leaving the EU argue that it has cost the country billions of British pounds per year in membership fees without any substantial return, and imposes unnecessary rules and regulations on businesses. Furthermore, they argue that EU membership has diminished the country's national sovereignty as well as its right to control its borders and immigration.

Yet advocates of remaining in the EU argue that leaving would have profound and unforeseen consequences for the U.K. in areas such as trade, finance, and national defense, serving to further diminish its status as a world power.

Polling on the upcoming referendum has shown that the British population has been largely split on the issue. According to a recent poll conducted by the Economist, 43 percent favor leaving the EU, 42 percent favor remaining, and 12 percent are undecided.

In an attempt to assuage fears in the U.K. over the EU's growing threat to its sovereignty, Cameron, who favors remaining, has already renegotiated the U.K.'s treaty with the EU to allow for further national sovereignty if the country votes to stay.

The Israeli government-unlike those of the United States or other EU members states, who all support the U.K. remaining-has largely been silent on the referendum issue. But if the U.K. voted to leave the EU, it would likely have profound consequences for the Jewish state in a number of areas ranging from economic and political relationships to the anti-Israel Boycott, Divestment and Sanctions (BDS) movement.

"It is important to have the U.K. around the table with other EU leaders," BICOM's Sorene told JNS.org. "The U.K. is a thriving liberal democracy and an important country in Europe. The U.K. has been supportive of Israel, so if it was no longer in the EU, you wouldn't have those pro-Israel voices at the table."

In recent years, the EU has taken a hard stance on Israel's involvement in the disputed territories. Last year, the EU issued labeling guidelines on products coming from Israeli settlements, straining relations with Israel.

"While it is true that Britain often adopts the wider EU position [on Israel], I think it is still important to have the U.K. around the table to discuss those issues. If it was no longer there then it wouldn't be part of those discussions," Sorene said.

At the same time, the EU is Israel's largest trading partner and a major source for foreign investment as well as cooperation on areas of research and scientific development, such as Israel's role in the EU's Horizon 2020 research program.

Given these factors, Israel would not want to lose the U.K. in economic and political discussions inside of the EU, Sorene believes.

"I think that Israel will miss out on having the U.K. there at the table in EU discussions. The U.K. is often more aligned with the U.S. on its stance on Israel and its conflict with the Palestinians... Not having the U.K. in the EU would be a major disadvantage for Israel," he said.

Aside from Israel's relationship with the EU, the Jewish state also has close economic ties with the U.K., as several Israeli companies are listed on the London Stock Exchange.

"It is rather difficult to create a vision of what the U.K. would be like outside of the EU," Sorene said. "But I think in many ways the other item for Israel is that they have a very large trading relationship with the U.K. All those Israeli companies floating on the U.K. stock exchange and have a presence there. I don't know how that is going to change if the U.K. leaves the EU."

Another concern for Israel-and for Europe's beleaguered Jewish community-is the potential effect the U.K.'s exit could have on European politics and attitudes. Over the last few years, Europe has faced unprecedented challenges from the influx of Middle East refugees and the threat of radical Islam.

Robert Halfon, a Jewish Member of Parliament from the U.K.'s Conservative party and a government minister without portfolio, believes that the U.K.'s role in Europe is pivotal in confronting these challenges.

"If the free world is walking towards a major clash of civilizations-between medieval Islamism and enlightenment on the one side and between free nations and greater nationalism from [Vladimir] Putin's Russia-it is vital that Britain is part of the alliances of democracies, whether it be NATO or the EU," Halfon wrote in an op-ed for The Telegraph.

"Not only is the EU alliance of democracies made stronger by Britain's presence, but it also means that we have at least a chance of ensuring that our democratic friends in Europe go in the right direction," Halfon added.

Similarly, Sorene expressed concern over the growing populism across Europe, and what that might mean for the continent's Jewish community and for Israel.

"The people who want Britain to leave and want the EU to break up are also mostly right-wing populists who are also anti-immigration," he told JNS.org. "That's an issue of deep concern because they are going to feel stronger and more emboldened. There has been a lot of scaremongering in the U.K. over these issues... I think the main thing for me is the debate about immigration and it is quite xenophobic and very dangerous for the U.K., the Jewish community, and Israel."