Love letters of the Holocaust 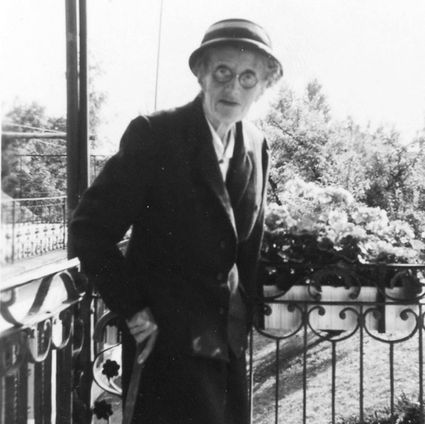 This is a story about the power of letters to span both years and miles, and to unite the hearts of children and their parents when powers they can't control force them apart.

More than a dozen years ago in Worcester, Mass., Prof. Deborah Dwork got a letter from a man in Switzerland she'd never heard of. Ulrich Luz told her about something he'd discovered packed away in a suitcase among his late aunt's belongings that might be of interest to Dwork.

Indeed it was-so much so that she is now writing a book about his aunt's quiet heroism and the lasting treasure she managed to preserve.

It turns out the nephew, a retired professor of theology in Switzerland, had heard about both the work of the Strassler Center for Holocaust and Genocide Studies at Clark University, for which Dwork is the founding director, and Dwork's book "Children with a Star" (Yale University Press, 1991). So when Ulrich Luz discovered more than 1,000 letters his aunt Elisabeth Luz had sent back and forth between hidden children and their parents from the time of the Holocaust, he had a hunch Dwork might find the collection to be of value.

"He began sending packets of the letters...over 1,000 in all," says Dwork, who is also the Rose Professor of Holocaust History at Clark. She was ready for the fragile old sheets of paper, having assembled white cotton gloves, archival paper, acid-free sleeves, and tweezers.

"It was such a treasure, and an amazing thing to hold them," she recalls. Then began the long process of translating the letters, which had gone from parents in Greater Germany to their children hidden in France, Belgium, the Netherlands, and England.

In all, several hundred families are represented in the collection. Many of the letters were from parents and kids reassuring each other that they're alright, as both sides walked gingerly across the land mine of loneliness and worry.

The letters' dates span the years beginning in late 1938, when the Kristallnacht pogrom and the general anti-Semitism of the time mobilized the Jews in Greater Germany to try to send as many children as possible to safety.

When war broke out the following year, civilian mail stopped moving freely and Luz managed to keep the correspondences going by taking a more central role as letter writer. "Dear Tante Elisabeth," a child might write to her. "Please tell my mother I am fine and doing well in math." Or a father might ask her to convey, "Dear Elisabeth, please tell my son to dress warmly and that we send our love."

Most of the families' correspondences stopped cold by 1945, by which time the majority of the parents were presumed murdered; others continued into the 1960s. It is still unknown how many of the children survived, but presumably far more than the parents, most of whom were unable to escape the Nazis' murderous net.

But one of the enduring mysteries about the collection of letters is that they are all originals, written by these parents and children. No one knows for sure why, in the era before Xerox, Luz rewrote each of the 1,000 letters by hand and sent them out.

The prevailing theory? "Trying to fool the censors," says Dwork, who included several of the letters in her book "Flight from the Reich: Refugee Jews 1933-1946" (Norton, 2009).

"This church-going Christian lady, who often spoke about the importance of giving aid and help, spent years doing this painstaking work and at no small risk to herself," she says.

The Strassler Center at Clark University is still scanning, sorting, transcribing, and translating the letters, and the public should be able to access them by early 2018, but several of them are going to be used at the center's Summer Holocaust Institute to help high school history and literature teachers integrate the Holocaust into their curriculum.

"The letters are a great opportunity to engage with this time period firsthand and understand some of their concerns these parents and children had," says Sarah Cushman, who directs the summer institute.

"The average American kid will understand these kids' concerns with their futures and even petty gripes between them and their friends," she says.

This often comes as a surprise, says Cushman, explaining that with "our 20-20 hindsight, we know all too well the outcome for most of these families, but the letter-writers of course could not. The number 6 million is an abstraction, but one document from a real person can make the Holocaust real for today's teens."

"These personal letters are a compelling way to teach aspects of the Holocaust because they relate how families dealt with the problems and pain they endured," she says.

Indeed, the letters just may serve another function.

"Google 'Holocaust' and the first sites that come up are all deniers," says Janet Stein, president of the American Association of Jewish Holocaust Survivors and their Descendants of Greater Boston. "These letters are positive proof that it happened."

The letters could also be a healing force for any of the children who remain alive, adds Stein, whose own father survived Auschwitz to emerge as the only member of both his family and his community in Hungary to live on.

"So many of the kids grew up never even knowing they were Jewish so these letters could be a reminder of who they really are. As all that is left behind of their parents, how precious these letters would be to their children," she says.

"Especially in times of war the mail could bring a warm message from a loved one very far away," Goldberg says. "You watch for the mail and when the letter arrives you gather the family to hear it. It was so reassuring."

Or of course, it could be tragic, as is the case when one receives a wartime letter from someone who had been killed during the time it took the letter to reach its destination.

Today, we have lost something with the reliance on emails and texting as well as the disappearance of the hand-written letter, Goldberg maintains.

"The ritual of a letter, the sitting and thinking and writing down, then the excitement about an answer coming and reading it over and over again, it celebrated and cemented our relationships," he says.

Prof. Alexandra Garbarini, who teaches modern European Jewish history at Williams College in in Williamstown, Mass., says she's looking forward to seeing the letters. Having studied parents writing diaries for their children during the Holocaust years and written about it in "Numbered Days: Diaries of the Holocaust" (Yale University Press, 2006), Garbarini says "there's a newfound respect for the original documents from those who lived history, not just studied it. And here you actually get to read the words of the children, which is very rare."

"Because she was willing to play the role as messenger between hidden children and their parents, they could maintain some semblance of a relationship," says Garbarini. "And it was all done for the sake of the child whose life depended on maintaining the fiction they had all created-the parents, the child, and the adoptive family too. It reminds us that very small acts when done in such numbers means it's no longer a very small act but a big one."

"As they spiraled into different worlds, the children pined for their parents and the parents yearned for the children," says Deborah Dwork. "This allowed them to keep close. It was a quiet but poignant example of resistance." 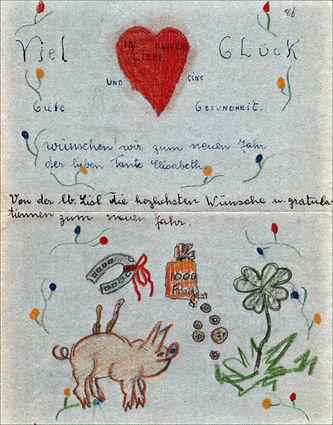 One of more than 1,000 letters that Ulrich Luz sent to Prof. Deborah Dwork.

Janet Stein mused, "On some level did this woman have the foresight to think about history and that people might discover these someday? Could it have occurred to her that these were valuable not just to the families then but to people in the future too?"