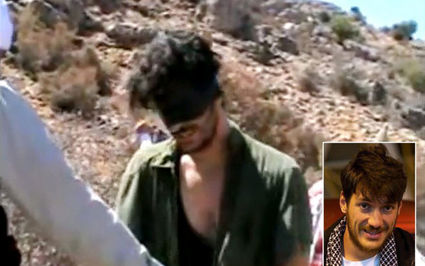 The last known photo of Austin Tice being held captive.

(JTA)-The parents of Steven Sotloff, the Jewish freelance journalist beheaded by the Islamic State nearly two years ago, have joined the families of three other killed U.S. hostages in urging President Barack Obama to bring home a missing American hostage.

Shirley and Arthur Sotloff, in an essay published Wednesday in the McClatchy newspapers, called on Obama not to leave behind any Americans when he leaves office in January, referring to freelance journalist Austin Tice, who disappeared in Syria in August 2012 and believed to be held by Assad forces. Tice is the only American reporter known to be held hostage anywhere in the world, according to Reporters Without Borders.

The families pointed out that one year ago this week, Obama "made a commitment to improve our government's dismal record on the return of American hostages."

"We are four families bonded together by tragedy and terror," they wrote. "We will never fully recover from the horrific outcome of our own hostage crises. But there is something that still can be done: Bring Austin Tice safely home."

The Sotloffs read: "We, the family of the late journalist Steven Sotloff, remind President Obama of the following: You told us in person that if it were your daughters, you would do anything in your power to bring them home. We implore you: Bring Austin Tice home."

Tice, now 34, was working as a freelance journalist for McClatchy and The Washington Post when he was taken captive. Besides a brief video clip posted about six weeks later showing him with unknown gunmen, there have been no other signs of life.