Drug abuse, shame and the Holocaust figure in film about family of notorious Dutch lawyers 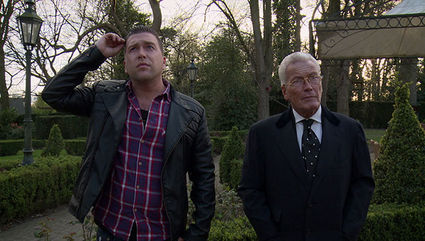 Max Moszkowicz (l) with Robert Moszkowicz near Maastricht, the Netherlands, in 2015.

AMSTERDAM (JTA)-In a country where 75 percent of Jews were murdered in the Holocaust, the Moszkowicz family of lawyers stood out as a unique Jewish success story.

Descended from Max Moszkowicz, a steel-willed Auschwitz survivor who became Holland's first modern celebrity attorney, his four lawyer sons took the family business to new heights, turning their name into a household brand here with winning arguments in some of the country's most famous trials.

Max Moszkowicz himself in 1987 obtained a mere 4-year sentence for the kidnappers of the beverage mogul Freddy Heineken. His second son, Robert, in 1976 became Holland's youngest person to pass the bar exam at 23 (he was a millionaire by 29). Another son, Bram, kept making international headlines-including through the 2010 acquittal of the anti-Islam politician Geert Wilders of hate speech charges.

The Moszkowiczes were widely recognized as legal geniuses in the media and at events held in their honor.

But over the past decade, they have fallen from grace. Three of Max Moszkowicz's sons were disbarred for improprieties, starting in 2005 with Robert-a former heroin addict and flamboyant womanizer who was accused of cheating his clients-and ending in March with the oldest brother, David.

This month, the Moszkowiczes are again making headlines in Holland because of "We Moszkowicz," the first revealing documentary film about the remarkable family. Made by the first-born son of Robert Moszkowicz, the television production retraces the Holocaust's deep effects on three generations that for many represent Dutch Jewry's struggle to return to normalcy after the trauma of the genocide.

Combining footage from Amsterdam, Jerusalem and Auschwitz, the critically acclaimed work by Max Moszkowicz, a 37-year-old filmmaker who is named for his 89-year-old grandfather, offers an unprecedented insight into the rise and fall of a now notorious family.

The filmmaker describes to his father his own panic as a child at seeing Robert, then still a celebrated and practicing lawyer, collapse into a drug-induced stupor at his mansion near Maastricht. Heroin was in plain sight at the father's Amsterdam apartment, the filmmaker recalls. Robert told him as a child that the beige powder and tin foil were for making special flu medicine.

Standing opposite his father, Max Moszkowicz confronts him over his shame at elementary school following Robert's publicized arrest. Over the space of six years, the filmmaker followed his father around, assembling the portrait of a vain, sometimes selfish and ultimately unrepentant man who never apologized for actions that apparently have scarred several of his nine children, whom he had with four women.

But "We Moszkowicz" is no damning indictment, filmmaker Max Moszkowicz told JTA in an interview last week about his film, which the Volkskrant daily described as "confrontational, moving and often painful."

Rather it's a story about three generations of a troubled but loving family, and an attempt to examine their dysfunctions in light of secondhand emotional damage in siblings attempting to live up to their fathers' ideals and legacy. The film reveals that the patriarch, determined to rebuild the Jewish family destroyed by the Nazis, disowned Robert because he married a non-Jewish wife-the filmmaker's mother.

The rejection was so absolute that in 1993, the elder Max Moszkowicz and three of his sons appeared as a family on a television talk show without ever mentioning Robert.

"Four musketeers," Bram Moszkowicz told the host in describing his family on the show. "One for all, all for one."

David concurred, saying with a grin: "I couldn't have said it better myself."

Filmmaker Max Moszkowicz said the images, which he saw at 14, "cut like a knife."

"I wanted to understand what my father had done to be cut from the family as though he never existed," he said.

Ostracized by his kin, Robert Moszkowicz, a handsome fast talker who enjoyed Italian designer suits and expensive cars-though he struggles with debts, he still owns a late model Jaguar-was driven over the edge following the death of his third child. Jair lived less than one year-Robert had him with his second wife, a heroin addict who kept injecting throughout her pregnancy.

Following his first arrest in the 1990s for drug dealing, Robert received a visit in jail from his father, who despite their harsh disagreements took on his son's legal case because not doing so "would've meant losing my son forever," as the patriarch said during a television interview.

During the charged jailhouse meeting, the father told his wayward son that the facility reminded him of the concentration camp.

"That's what I want to experience," Robert replied in what he explained in the film as "a typical desire to feel what my father felt" in the Holocaust.

It's a key moment in the documentary for understanding the Moszkowiczes' self-destructive streak, the best-selling Dutch Jewish author Leon de Winter told JTA.

"It's no coincidence that three sons of this amazing family were disbarred," de Winter said.

Bram Moszkowicz's disbarment for mismanagement of funds was "disproportionate," de Winter said, noting that it ultimately came from legal transgressions motivated by an insatiable drive to please the family patriarch, who lost his parents and two siblings as a teenager in the Holocaust.

The patriarch Max "raised his boys to be invincible," de Winter said. "And they, in their desperate love and dedication to him, felt the only way to get close and equal to him was to follow him into hell."

And though they built an empire, the Moszkowiczes always remained outsiders in the Netherlands post-Holocaust, separated from the intellectual elites they frequented by their own traumas and weaknesses for flashy cars and expensive clothes.

"It's as though they overcompensated in a delayed and tragic effect of the hell that Max Moszkowicz went through in Auschwitz," de Winter said of the family.

For all its tragic retrospection, "We Moszkowicz" also offers a sense of hope and redemption.

The filmmaker and his father are close, their bond cemented on a two-week trip they made to Israel in 2014. In one of the film's most moving scenes, Robert Moszkowicz, who is somewhat observant Jewishly and recites his prayers in Hebrew, is overcome with emotion at the Western Wall and is hugged by his son as he cries against the ancient stones.

Robert is also a devoted father to his youngest children with his fourth wife. Opening up in this unprecedented manner to his son's camera, the filmmaker said, "is his way of making up for mistakes."

It was with an eye to the future that the younger Max Moszkowicz began making the film in the first place, he said, not wanting to repeat his father's mistakes with his own first son, Ilai, who was born last year.

"Six years ago, I came drunk to a house party with a bloody mouth that I got from falling down en route," the filmmaker recalled. "I had an alcohol and drug problem. I saw my bloodied reflection in a mirror at the party and I could see my father's self-destructive pattern."

That evening, filmmaker Max Moszkowicz decided to take a hard look at his life that resulted in the film.