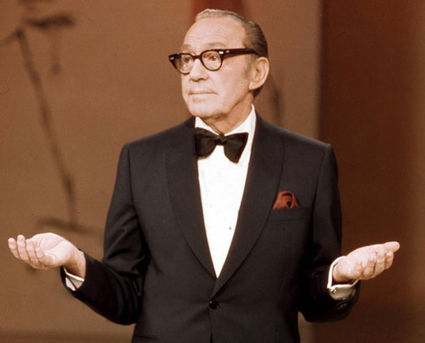 Everyone who remembers beloved comedian, JACK BENNY, remembers that he always claimed to be 39 years old. (Well mentally, maybe).

Anyway, I believe that's where the Jewish Community Center's 39ers Group got its name!

I attended a meeting of the 39ers last Monday afternoon. The members were all very nice and welcoming to me. I knew most of them by their faces but could not remember names. Many knew my name though, because of this column.

JCC Program Director MARNI CHEPENIK introduced me to some of them and I was made to feel very much included. I intend to continue meeting with these lovely folks.

The speaker at yesterday's program was Dr. DOUGLAS A. HEISE, a local doctor of alternative medicine. He was quite interesting and informative.

Is it time for the Jews to leave Europe?...

I know the news media is concentrating on Brexit these days (Britain leaving the European Union). But is it time for the Jews to make an exit as well due to the increase in anti-Semitism? According to the World Jewish Congress (WJC):

"'They called us dirty Jews' and said 'You don't need your jewelry anymore. You've been wearing it for too long. Now it's all ours,'" said Diana after she and her husband, Shmuel, (both Holocaust survivors) were viciously beaten by two thugs in Amsterdam.

As a result of the attack, Shmuel lost his sight and both are confined to wheelchairs. Now Diana has fresh scars of hate to add to those she received from the guard dogs at Auschwitz more than 70 years ago.

In Warsaw, Poland, marking the anniversary of the decision by Poland's Constitutional Tribunal that declared Poland's ban on kosher slaughter to be illegal, vandals desecrated the fence outside of a Jewish cemetery and in St. Polten, Austria, outside of a mall, a man wearing a Star of David was violently assaulted while thugs launched a profanity-laced tirade.

It's incidents like this that prompt the question "Is it time for the Jews to leave Europe?"

ELAINE WEINSTEIN is her name. I recently received this email about her:

"Elaine is a loving and dutiful daughter, so she gladly went to Oakmonte Village to visit with her father and cared for him at the end of his life. Over the years, she connected with his friends and joined them for card games and Jewish Pavilion Shabbat services.

Years after his passing, she continues to go to Oakmonte regularly to visit with her friends in Assisted Living, provide hugs and lead Shabbat services.

Elaine is adored by the residents and they have become surrogate family for one another. "

The Winter Park Playhouse is bringing in a true celebration of happiness!

"Based on Bob Hope's 1942 USO tour to the troops, this 'All Singing, All Dancing' musical delivers an electrifying evening of classic songs, dance and laughs. 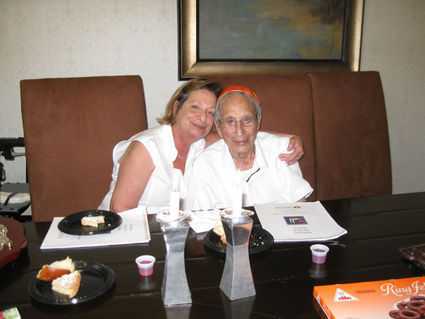 Elaine Weinstein with her father

From road show to radio broadcast, the timeless hits with tight harmonies, on-air antics and rousing comedy, will delight audiences of all ages!"

Moshe was recovering in the hospital from prostate surgery. To make matters worse, his surgeon had told him that it would be six weeks before he could be sexually active again.