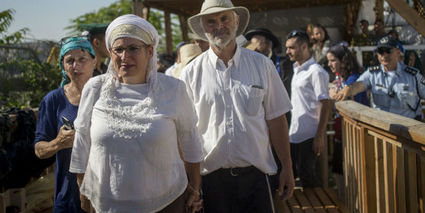 Five hundred Jews gathered Tuesday morning by the entrance to the Temple Mount, to ascend in memory of Hallel Yaffa Ariel, a teenage girl who was stabbed to death by a Palestinian on June 30.

In a YouTube video released last week, Amihai Ariel, Hallel's father called on the Jewish nation to join himself and his family on the Temple Mount on Tuesday for a memorial ceremony.

Rina Ariel, Hallel's mother, wrote a letter to Israeli Prime Minister Benjamin Netanyahu during his diplomatic trip to Africa last week, requesting that a group of 250 friends, family and supporters be permitted to hold the ceremony on the Temple Mount.

"We and Hallel have always felt a deep connection to the Temple Mount," Rina wrote, according to Ynet News. "We visited it and will continue to do so, as we believe that it is the house of God, and that it gives strength and life to each and every house in Israel."

"Just recently, 200,000 Muslims performed a mass prayer at the site," Rina wrote, referring to the traditional commemoration for Muslims at the conclusion of the month of Ramadan. "Would a Jewish group made of a tenth of that number not be allowed to convene there for a single hour?" she continued.

"The terrorist butchered our daughter in her heart, and our heart is in the Temple Mount," Rina Ariel told the press last week while mourning her daughter. "Anyone who can come strengthen our heart [should], not through war and not through hate. Support us so that our strength and our heart should continue beating."

Yael Kabillo, Hallel's aunt, told Breaking Israel News that the Prime Minister's office contacted the Ariel family Monday night, telling them that no Jews would be allowed on the Temple Mount on Tuesday due to security concerns. They were resigned to that disturbing possibility but resolved to pray for a reverse in the verdict. Indeed, several hours later, the PM's office called again to say a small group of family members would be permitted into the site.

Approximately 200 Jews entered the Temple Mount compound for the ceremony, which was closely monitored by Muslim officers to ensure it contained no words of prayer.

The private ceremony was accompanied by jeers and angry shouts of 'Allahu Akhbar' from the Muslims, but the Israeli police kept the crowds under control. Two Jews were arrested for violating the agreed-upon terms for visiting.

Amihai's cousin, Minister of Agriculture Uri Ariel, was forbidden by the government from joining his family on the Temple Mount in accordance with the Israeli law prohibiting Knesset members from ascending.

Yishai Fleisher, prominent correspondent and spokesperson for the community in Hebron, gave an impassioned call for "basic human rights" in Jerusalem.

"We have a right to pray in our holiest place! This is a humiliation we cannot stand," he called out to the cheering crowd. Fleisher addressed the recent motion in UNESCO, in which they denied, for the second time, any Jewish connection to its holiest site.

"But who cares about letters or what they say?" Fleisher continued. "If our own government won't let us go up, everything else is meaningless."

"We conquered the Temple Mount and all of Judea and Samaria in 1967," Rabbi Glick said to the crowd. "But that's not true. It wasn't the army. The ones who really conquered the land are the small child walking to kindergarten, the mother who goes to the store. The same thing is true here at the Temple Mount. We can scream at the politicians all day, but it won't do a thing. We need all these people to be here all the time."

In the YouTube video, Amihai Ariel also asked that the Mughrabi Gate, the only gate through which non-Muslims are allowed to ascend to the Temple Mount, now be called the Hallel Gate, in memory of his daughter. Hallel, a popular name in Israel, means "praise" and is the collective name for the psalms that were sung in the Temple service.

The Mughrabi Arch, a wooden bridge and the only access to the gate, has been the focus of controversy, with the Waqf (Muslim authority) claiming that Israeli attempts to make a more permanent structure are intended to weaken the foundation of the Dome of the Rock.