Meet a Namibian cyclist pedaling for a diverse Israeli team 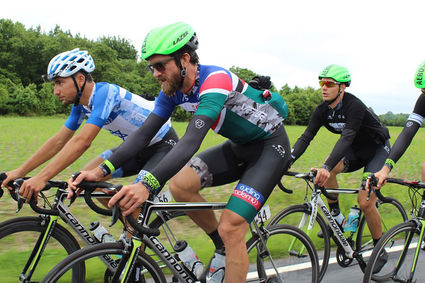 Dan Craven, foreground, riding on a training run in Delaware with Cycling Academy teammates, May 2016.

PHILADELPHIA (JTA)-Growing up in Namibia, Dan Craven would bicycle long distances upon the only two paved roads in his hometown of Omaruru-80 miles heading north to Otjiwarongo and 45 miles south to Karibib.

Cycling on what he calls the "tar roads" is how he fell in love with the sport; plus Craven acknowledges he wasn't very good at soccer or rugby. He took to the road after seeing a poster promoting a triathlon, which encompasses bicycling, swimming and running.

While competing for the cycling team at South Africa's Stellenbosch University, Craven first believed he could pedal for a living.

Craven, 33, has been cycling professionally for about a decade. Now he is plying his craft for an Israel-based international team, the Cycling Academy, that features not only Israelis but a diverse group including riders from Estonia, Mexico, Poland, Italy, the Czech Republic, Canada and the United States. On the 15-rider club, only the five Israelis are Jewish.

After being recruited by the Israeli team, Craven signed a contract this winter and already is one of its co-leaders.

Craven comes to the Cycling Academy after spending 2014 and 2015 with Team Europcar, in '14 becoming the first Namibian to compete in and complete the Vuelta a Espana, a top European event. Earlier he had spent four years each with teams in Switzerland and England.

In 2012 he represented Namibia in the Olympics but crashed.

Craven is among the less than 10 percent of Namibians who are white, most with roots in the Netherlands and Germany. His great-great-great grandfather, John, moved from Yorkshire, England, to South Africa in 1840, a century and a half before Namibia gained independence  from South Africa.

As a younger boy in the coastal village of Swakopnund, his best friend was black; the boy's parents were from Uganda. The two often played on the sand dunes or watched television.

It wasn't until moving to Omaruru that "I suddenly became aware of racism and those differences," Craven said.

Neither his homeland nor Israel are conventional road-cycling countries.

"Israel and Namibia don't have a strong culture of cycling, so it's easier to have an impact and make a bigger difference. It gives me more satisfaction," said Craven, who lives in Spain but has been to Israel twice for team training. (The Cycling Academy has trained part of the year in Italy's Tuscany region and in August will train in Colorado.)

"In countries like Italy and France, there's a pathway to becoming a pro. I come from Namibia, with no pathway. By being part of the Israeli team, I'm creating a bit of a pathway, and also showing other countries that it's possible."

In Israel, Craven said, he enjoyed taking in the country's landscape on rides, especially along the border with Egypt.

Asked about Israel's diplomatic issues, Craven said he remains too uninformed to venture an opinion. But he is abundantly curious and said he constantly educates himself about the country by reading articles online.

Tellingly, Craven said, competitors are intrigued by Israel-or at least by the Israeli team, which is in just its second year of operation. Many approach him to inquire about opportunities to join the Cycling Academy club.

"They see that it's organized," said the bearded cyclist, a 6-footer. "This is a team they want to be on, and word spreads quite quickly."

It's a team with a pleasant mix of cultures and ages that projects openness and doesn't talk about the politics of Israel. In group settings, English is the lingua franca to encourage inclusivity. (Besides the Israeli quintet, the academy includes the Boivin brothers from Quebec: Guillaume is a cyclist and Pierre handles logistics.)

Sorensen spoke to a JTA reporter sitting alongside while driving a support car a few yards behind his riders getting in a 100-mile workout on the streets of Wilmington and New Castle, Delaware, to prepare for an event in Philadelphia two days later. Every 30 minutes or so, the car stopped and the team's Lithuanian mechanic hopped out to replace a cyclist's flat tire. Several times over the five hours, a rider pulled alongside and grasped the front passenger's window ledge, gliding as the mechanic leaned out to oil the gears. A push on the back sent the cyclist on his way.

"This team is going to grow. It is going places," he said.

As the team rode its sponsor-provided luxury bus-courtesy of the industry behemoth Cannondale Bicycle Corp.-back to its hotel after the training run, laughter erupted. The source: a just-made video clip showing one team member depositing a banana in the mouth of napping Israeli rider Aviv Yecheskel.

Roy Goldstein, a 23-year-old cyclist who joined the team in April, interrupted the interview with JTA to have a look at the video, then proceeded to talk about Craven's knowledge and leadership.

Goldstein recalled ascending a hill in a Luxembourg race when Craven, riding alongside, suggested that he gradually decrease the pace. Easing up on the incline, in a stage the team couldn't win anyway, would slow Goldstein's heartbeat and conserve energy for the next stage, Craven promised.

The tip proved accurate when Goldstein applied it in Italy at another race.

"It gave me a sense of security," Goldstein said, "knowing that I could.