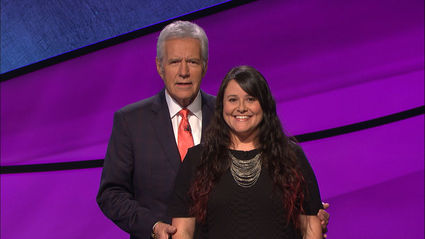 Altamonte Springs resident Barbra Resnick accomplished something she always wanted to do: Be a contestant on the TV game show Jeopardy!

Not only was she on the show-she became a two-time champion, with earnings that totaled $20,000.

Resnick, with her husband, Steve Arthurs; mom, Phyllis Resnick; and brother, Matt, flew to California to be on the show almost a year after she first tried out for the game show (Dad, Curt, stayed home).

One does not just apply to be a contestant on Jeopardy! It's a multi-step process, Resnick told The Heritage. First, she took an online test of 50 questions in February 2015. Then in June 2015, she was invited to Atlanta to answer another 50 questions and play in a mock game.

Resnick was told she could receive a call to be on the show at any time during the next 18 months. If she did not hear from Jeopardy! staff, she could reapply and start the process all over.

This past April-just a little over 12 months-the game-show staff called her. It surprised her. "They'd called and left a message that they would call back. Resnick wondered, why would they call? (It had been a year, after all). She was driving her car when they called again to tell her she was chosen to play on the game show. "They were so nonchalant about it," she said. However, she was so excited she had to pull off the road.

In her first game (which aired on July 27), Resnick played against a six-time winner. She was nervous.

"I used my experience as a clinical social worker and went into the ladies room and gave myself a 'self talk'-telling myself to just have fun and that 'yes, he is good, but so am I, so just relax. This is your one shot,'" she said.

It worked, because she won against him. And if that wasn't exciting, in the second show (July 28 air date), she won by one dollar.

Resnick buzzed in to answer the last category question, bringing her dollar amount to exactly half of the leading contestant's amount. For the Final Jeopardy question, Resnick wagered it all. The leading opponent bet $1. Her answer was correct, his was wrong. She won.

Resnick said that after the show and all the contestants had the opportunity to talk with each other, the lost-by-a-dollar opponent said that he considered not wagering anything-which would have resulted in a tie. He said he didn't want to risk losing it all, ending up in third place instead of second.

(The rules of Jeopardy! now are that if a tie results, the players have one last question given to break the tie.)

The third night of play, Resnick came in third, losing to a UCF alumni, who came over to her after the game and apologized for winning against her.

Resnick, who used to be the USY adviser at Congregation Ohev Shalom where she still attends, is now good Facebook friends with the gentleman she beat by a dollar and the woman who beat her in that final game.

"Everyone was so nice, that's what I liked the best about it all," said Resnick about all the contestants, who all truly rooted for each other.

The shows were taped a few months before the airdates, and Resnick had to keep her winnings a secret. Family and friend "watch parties" were held from here to West Chicago as everyone eagerly tuned in to Jeopardy! and see how this former Teague Middle schooler and Lake Brantley graduate would do.

"We told her we are all so proud of her," said her mom.