By Felice Friedson
The Media Line

Trump's Israel gatekeeper: Like his boss, no room for 'PC' 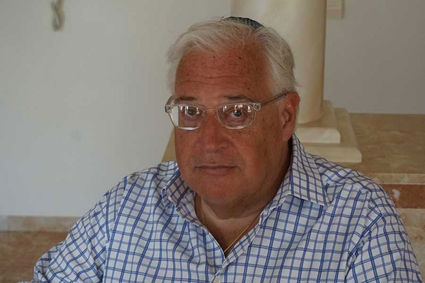 JERUSALEM-Love him or hate him, Republican candidate for president Donald J. Trump is doing it his way, ignoring what the American professional political world believed was the only way to become a party's nominee and win "the Oval."

No issue is more imbued with slogans and adherence to conventional wisdom than is the Middle East. Two-state solution, occupied territories, illegal settlements, incitement and even terrorism-the list is long.

Yet, notwithstanding the extreme sensitivities of the regional players and the long history of seasoned diplomats failing to broker anything that even remotely resembles a lasting peace deal, Trump, the first-time-out candidate, has selected gatekeepers for Israeli-Palestinian issues whose loyalties undeniably lie on the side of the Jewish state; who are personally and professionally erudite and successful, but who are also noticeably lacking the political trial-by-fire one would expect of a senior adviser on a lightning rod issue in a presidential campaign. Nevertheless, both of the two lawyers tapped for this delicate representation qualify for the position by virtue of what Trump himself was quoted as saying he looks for in an adviser on Israeli affairs: "people who truly love Israel."

Jason Greenblatt, 49, who has worked for Trump for almost two decades and who is religiously-observant, told the Jewish news agency JTA that he stays apprised of issues by accessing a number of pro-Israel sources and advocates along with members of the Israeli government. His colleague-in law and in the Trump campaign-is 58-year old David Friedman, a native New Yorker whose father, a prominent rabbi, became the first Jewish clergyman to host a sitting president for a Shabbat meal when President Reagan joined the Friedman family for lunch in 1984.

David Friedman, thank you for speaking with The Media Line.

TML: Who is David Friedman and why has Mr. Trump made you the gate keeper on policies relative to Israel?

Friedman: Well, first and foremost I'm somebody who loves Israel and someone who has Donald Trump's trust. We've known each other for 15 years. I've worked with him in some challenging circumstances and have gained his trust and I would hope his respect. When he was called upon to select advisers in various areas, one of those areas was the relationship between the U.S. and Israel and he wanted to select advisers who he knew had a deep love and commitment to the state of Israel.

TML: Are you going to tell us that one of the first acts is to move the embassy to Jerusalem?

Friedman: I think one of his first acts is going be to recognize Jerusalem as the capital of Israel. I think the movement of the embassy to Jerusalem is logistically something that can't be done on the first day [but] I think that will happen in due course.

TML: Why do you think Donald Trump should be the next president?

Friedman: The president is the chief executive of the United States. He's not a legislator, he's not a committee member, and he's not an adviser. Donald Trump has outstanding executive skills. He is a terrific decision maker. His heart is in the right place. Contrary to what people say about him, he's not impulsive. He is someone who listens to his advisers, and when called upon to make decisions, actually exhausts material on the subject.

He's also the right person at the right time because in America, we are very much hungering for non-tele-prompted leadership and authentic leadership actually accessible to the press. If you compare Donald Trump to any other candidate in history, he dwarfs the field in terms of his accessibility to the media and being on TV every night.

I think he's what the country needs and I think his message is resonating with people who feel that globalism has failed them. And it's a fairly large constituency in this country.

Friedman: His position is not a one-state solution. His position is that he's observed the obvious, which is that a two-state solution over the past generation has been attempted over and over again and has been a failure. The definition of insanity is to do the same thing over and over again expecting a different result-and he's not insane. To blindly embrace a two-state solution because it's been an American policy for the past 25 years is not something he's going to do, any more so than one would have expected a president in the 1970s embrace the Vietnam war because it was a 20-year policy of the United States. Policies are only good if they work.

TML: So what's his answer?

Friedman: I don't think this is an area which is susceptible to jingoism. It's a very complex issue. The conventional wisdom is that Israel has to be a Jewish state or a democratic state, but can't be both. It's essentially a demographic assessment, which I think is wrong. With the removal of the Gazan population from the denominator, I think a one-state solution would reduce Israel from about 75 percent of a Jewish state to maybe about 65 percent. I don't think it's existential to do that. Ultimately, the issue is one of reducing tension and improving quality of life. That ought to be the first step, not the geography. The geography will follow if appropriate advances are made in quality of life.

TML: A good chunk of the world uses the word "illegal" before the word "settlement" when speaking about Israel. You don't. Will President Trump?

TML: The United States is part of the Quartet, which has again condemned Israel for its expansion of Jewish communities in post-1967 areas. Would a President Trump change minds and policies of the European Union, United Nations, and Russia-its partners in the Quartet-or withdraw from the Quartet?

Friedman: It's a good question. I haven't really given it enough thought as to whether he'd withdraw from the Quartet and what the consequences would be. He would certainly use his influence within the Quartet to have a significant change of direction. The recent criticism of Israel in regards to Gilo and Ma'aleh Adumim [Jerusalem neighborhoods which the Palestinians claim for their state-in-waiting and object to Israeli building in those areas-Ed.] I think is just ridiculous. These are significant Israeli population centers. There is no scenario under any peace accord where Gilo or Ma'aleh Adumim would ever be evacuated or become part of a new Palestinian state. I think it jeopardizes the credibility of the Quartet and it jeopardizes the credibility of the United States when they focus on these types of issues. It's really a mistake.

TML: France is planning to throw a bash for Middle East peace before the end of the year: an international conference the Palestinians support and Israel says is a bad idea. How is David Friedman advising candidate Trump?

Friedman: My advice is that it's a bad idea. The international community should not be dragging Israel against its will to a conference. I don't think France has the type of gravitas in the world community to be making that demand in any event. A Trump perspective is to support Israel and its approach to the peace process.

Trump policy first and foremost is to trust Israel that they know what they are doing. Israel has now been independent for 70 years. They're a grown up country. They are not a client state of the United States. They are a partner with the United States in a global war on terrorism. We trust our partner and we want our partner to be secure and safe. We trust them to do the right thing.

TML: Assume rumors are true and Donald Trump decides to fly Trump Force One to Israel before the election. To maintain his status as honest broker would he meet with Palestinian Authority President Abbas?

I personally think putting the Israeli leadership on a common level with Abbas is a mistake. In one case you have a sovereign nation that is democratic, and in the other case you have a leader who is hanging on by a thread, who does not have an actual mandate and who funds stipends to pay to families of terrorists while they are in jail. These are difference types of governments-if you even want to call the Palestinian leadership a government. That doesn't mean that you don't have a meeting. The answer is, I don't know. We haven't had the discussion.

TML: What is Trump's message to Abbas and the Palestinians who fear another pro-Israel president in the White House?

Friedman: The message to Abbas is that you have a burden that you have to carry to be taken seriously as a potential nation state. You haven't met that burden yet. That includes renouncing violence, recognizing Israel as a Jewish state, creating infrastructure where money and funds are handled in a non-corrupt manner.

TML: What will Trump do to prevent Iran from creating nuclear weapons?

Friedman: This is at the very height of his foreign policy concerns and what he's going to try to do is re-engage with the other significant players in the region to try and re-assert leverage with Iran. The situation is absolutely untenable right now.

TML: Hillary Clinton has just about everyone suggesting she is the most qualified person ever to be president. Where did she go wrong with the Middle East-if she did?

Friedman: I don't think she has made a right decision. I think she said some helpful things when she was the senator from New York when she had a Jewish constituency. As soon as she became secretary of state, the first thing she did was to embrace a unilateral settlement freeze. I think it completely poisoned the environment. I'm not aware of anything she did that is particularly good. I can name off the top of my head things that were nasty, like ripping up the letter from George Bush to Ariel Sharon, which I think was the only thing Israel got from evacuating Gaza. I don't think she particularly likes Israel. I think she likes the kind of elite left among the Jewish people of Israel and in America like the Max Blumenthals, the Sidney Blumenthals and the people of that ilk who would like to turn Israel into a sort of Singapore. I think she's terrible for Israel.

Friedman: Look, it's a great disappointment to me that the Jewish Left doesn't support Israel as a priority. I'm hoping that as the American Jewish community recognizes the stark differences between a Trump administration and a Clinton administration on Israel that they will reprioritize Israel in their voting calculus. I think for a lot of the Jewish Left that does not prioritize Israel, it's because they assume that Israel no longer faces existential threats. A strong Israel untethered to American pressure is essential to Israel's ongoing survival.

Friedman: I hope so. At the core, the American people are very much ready for a change. He is obviously the change candidate. Hillary Clinton is the antithesis of change. She's been around for 25 years. It will come down to that. In many of the battlegrounds states, people feel tremendously neglected.

I don't know if you saw a very good piece done by [Israel's] Channel Ten here on the rust belt. It is extraordinarily depressing. These are good people who served in the military, supported the country and never really asked for much. They've been abandoned by multiple administrations. They are very much in large number supporting Donald Trump.