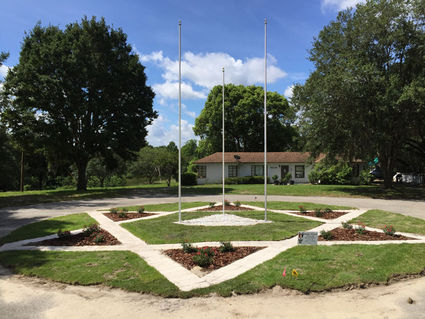 Eagle Scout Daniel Brown of Boy Scout Troop 641 in Maitland chose the Temple Israel Cemetery as the beneficiary of his recently completed Eagle Scout Service Project. Daniel was inspired on the occasion of his grandfather, Murray Schwartz's funeral in 2014. At "Papa Murray's" funeral, Daniel blew taps to honor his grandfather who was a corporal in the U.S. Army. He noticed that there were no flags and no monuments honoring Jewish War Veterans and that the cemetery entrance had a plain grass center circle. Working closely with Laurence Morrell, an officer of the cemetery corporation and chair of the grounds committee, Daniel designed flagpoles in the center of a stone path and garden in the pattern of a Star of David.

Before an Eagle candidate may begin a project, there are rigorous procedures with which to comply. The Scout prepares a formal project proposal which must be presented to and approved by the beneficiary organization (appear before the Temple Israel Cemetery Board), then his Scout Master, Mark Kluger, the Troop Leadership Committee (present to Howard Kaplan, chair, and the full committee), the Ft. Gatlin District Advance Chair, Ed Calish, and finally obtain the authorization from the Central Florida Council to raise funds. After obtaining all the necessary approvals, Daniel could then begin the work of planning all aspects of safety, materials, tools, and volunteers. Using a Go Fund Me account Daniel raised over $1,300 to purchase the needed materials. He then recruited 27 volunteers using Signupgenius.com for scheduling the workday. On June 26 and July 1, Daniel led his team in over 100 hours of service which included grading, laying stone, planting rose bushes, spreading marble chips, laying sod, and mulching. 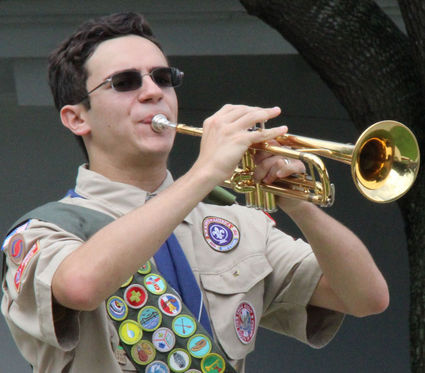 The National Office of Jewish War Veterans of America provided Daniel with guidance on an appropriate memorial marker that read:

"In honor of the men and women of the Jewish faith who gave their live and service to their country, these United States of America."

A dedication ceremony was held on Sunday, Aug. 14. Rabbi Joshua Neely gave the invocation followed by presentations by The Jewish War Veterans of America and the Temple Israel Cemetery Corporation. Daniel, Troop Bugler, played "Call To The Colors" as the Boy Scout Color Guard raised the American, State of Florida, and State of Israel flags.

Daniel Brown became the newest Eagle Scout of Boy Scout Troop 641 at his formal Board of Review on Aug. 3, 2016. A short film of Daniel's Eagle Scout Service Project can be viewed on YouTube.