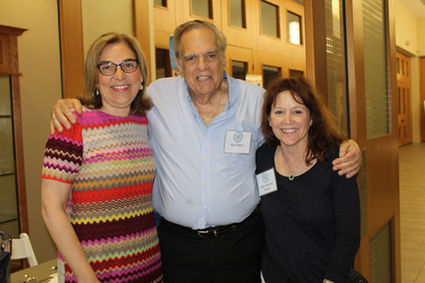 Several of the country's most prominent pro-Israel groups participated in the first Israel Today Symposium designed to educate the Dallas, Texas, community on understanding the complex issues Israel faces.

More than a dozen topics were discussed by experts including the Arab-Israeli conflict, business development in Israel, missile defense systems in Israel, Israeli technology, Boycott, Divestment and Sanctions (BDS) legislation and Christian outreach for Israel advocacy.

The BDS panel drew some of the most participants who heard from Max Chamovitz, deputy director of Israel Action Network; Republican Texas Representative Phil King; and Lauren Feibelman, national associate director of Campus Affairs for StandWithUs, among others.

"The BDS panel's explanation of what they are doing, particularly on [college] campuses was thought-provoking," Pamela Buckroyd told JNS.org. "They mentioned that one of the challenges is that different pro-Israel organizations on campuses are not united in their approach."

"Personally, I think another challenge is simplifying and clarifying the message. People (who are pro-Palestinian, pro-Black Lives Matter and pro-LGBT) do not realize they are boycotting businesses that employ Palestinians, Black (Ethiopian) Israelis, and LGBT Israelis," she said.

Texas Rep. King, who spoke on the BDS panel, focused on some of the challenges Texas faces in passing anti-BDS legislation. He plans to introduce an anti-BDS bill in January, similar to what 11 other states have already passed.

Ken Glaser, chair of the synagogue's Israel Connection Committee, which organized the Aug. 7 event, told JNS.org why creating the symposium was important. He is also a founder of Temple Shalom that celebrates its 50th anniversary this year.

"We actually had a mini-version of this limited to just the congregation a couple of years ago," Glaser said. As a member of AIPAC, he found it helpful to model a larger version of the event after AIPAC programs that seek to empower people in their advocacy of Israel.

"I wanted to bring something like this to Dallas because not everybody can afford or has the time to go to AIPAC."

Various organizations that typically attend national conferences on Israel advocacy sent representatives from the local area to set up booths, signifying that these groups consider the Dallas/Fort Worth community an important region to focus on. Some of the groups included the American Jewish Committee (AJC), the Jewish National Fund (JNF) and the B'nai Zion Foundation.

Glaser said that he hoped to reach the wider non-Jewish Dallas community by offering topics with a "broad perspective of raising awareness of Israel."

Joann and Olin Bond, a Christian couple who have visited Israel countless times and advocate for the Jewish state, attended the symposium to learn more about these topics so they can be better prepared to discuss them in their community.

"It is always wonderful to see Jews and non-Jews meeting together to find mutual ways to support Israel's right to exist in the land," Joann Bonds told JNS.org. "I especially enjoyed the Ethiopian Aliyah session and my husband particularly enjoyed the session on desalinization."

For Joseph Green Bishop, this event was an opportunity to learn more about Israel, it's history and its people. "It is important that all members of the human family respect and grow to love one [another], the symposium was consistent with that desire," Bishop told JNS.org.

Bishop co-chaired the symposium with Ken Glaser, who represents a North Texas-based group "dedicated to the advancement of the relationship between the Black American and Jewish communities through dialogue that leads to actions that enhance the entire society," he said.

Glaser was pleased that people that he collaborates with outside of Temple Shalom also participated. "It's working," he said. "Bringing this to the community is really what this is all about."