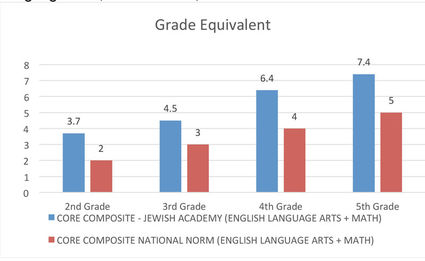 MAITLAND-On average, students at the Jewish Academy of Orlando are performing at least two grade levels ahead of their peers nationwide, according to results released from test scores taken in April 2016. The test was administered to second grade and above.

The Iowa Assessments rank the students' scores by grade level equivalents. As a general guide, a score of 7.4 for a 5th grader means the student is testing on an achievement continuum at a level equivalent to a 7th grader in their fourth month, or also reads they are 2 years and 4 months ahead of their current grade level.

"We are always thrilled to see our students' scores, but we are not surprised," says Alan Rusonik, who is beginning his third year of Head of School. "Jewish Academy of Orlando has a history of ranking top in the nation for years," says Rusonik.

The test is used by a large number of private schools and various states to measure grade-level performance. It is often paired with an IQ instrument such as WISC®-IV or the CogAT® for entrance into gifted and talented programs and National Honor Society.

"We try to challenge every student to the best of their ability. Differentiated learning," Wladis explained, "provides students with instruction, which adjusts learning, projects, homework and classwork to meet the needs of each individual student. Through differentiated learning, teachers increase the speed at which a student covers the material. This could include opportunities for instruction beyond their current grade level to more challenging material."

Teaching to the test is not the practice of the Jewish Academy of Orlando. "We use this test for a variety of reasons. One is to get a glimpse of how our student body is performing against national norms. It is one of many indicators teachers use to gauge how well students have learned benchmarks at each grade level," says Wladis. Rusonik adds, "These tests also allow us to understand where we need to refine and review our curriculum to stay competitive."

To further support Jewish education and your local Jewish day school, to get involved or for any questions, please contact Alan Rusonik, Head of School, at 407-647-0713.