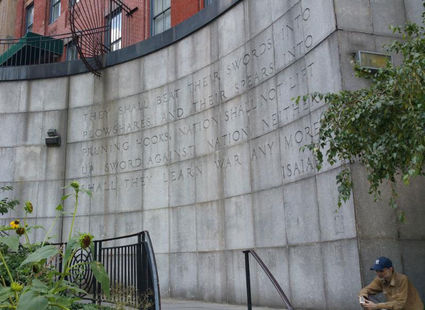 The Isaiah Peace Wall stands opposite the U.N. building.

Behind police barricades draped with a large Israeli flag and dozens of signs expressing prayers for the security of Israel and Jewish communities across the Diaspora, including the threat of the BDS movement, Rabbi Avi Weiss led the Mincha service, as Cantor Irving Ruderman led the prayers and read from a Torah scroll.

Glenn Richter kicked off the afternoon by providing a short history about this event and reminding the crowd of the importance of gatherings such as this. He mentioned that this was the 39th consecutive year that Tisha B'Av services were being held in front of the UN.

Shimon Mercer-Wood, the spokesperson of the New York Israeli Consulate, and the consul for media affairs, spoke about the meaning of Tisha B'Av, stating, "Tisha B'Av is a very bitter time and a time of truth. Perhaps because of that, no place could be better than to mark Tisha B'Av than opposite that building which is the seat of so much falsehood."

Jonathan Grauman, Americans for a Safe Israel's research analyst, detailed to the crowd a myriad of ways they could assist Israel. "Zionism is not a dirty word," he declared. "It is probably the only 'ism' in history that sprang forth from a noble cause and succeeded."

He then suggested to the crowd ways in which those living in America can support Israel from afar, stating, "Learn about Jewish and Israeli history! Be armed with the truth to refute the lies and distortions that Israel haters spew forth. Shop Israel. Sponsor 'Buycott Kiddushes' at your synagogues. Write letters, emails, comments, etc. to challenge the lies in the media. Believe the threats of anti-Semites and Israel haters!"

AFSI's Grauman continued, "We must support the right of Jews to live everywhere in Israel, and that includes all of Yerushalayim and Judea and Samaria, the cradle of Jewish civilization. Jews do not live in illegal settlements. Our Torah is the deed that proves it is Jewish land!"

The Tisha B'Av service was sponsored by Amcha-Coalition for Jewish Concerns, along with Americans for a Safe Israel, and the SSSJ.