By Pamela Ruben
Tidbits from the Sandwich Generation 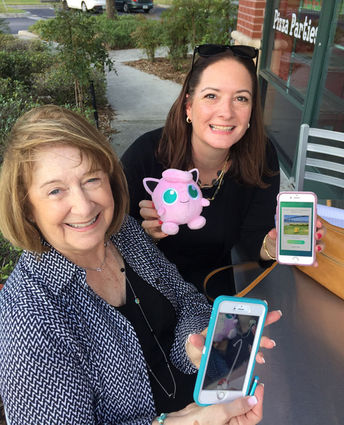 Ruth Darvin (l) and Pamela Ruben enjoy a game of Pokémon Go shared between the generations.

Chasing after Bulbasaurs, Jigglypuffs, and Pikachus started out as a way to spend time with our 'millennial' daughter, who like many members of her generation, is preoccupied with the game, Pokémon Go. Before we knew it, my husband and I had caught 'Pokémon fever', which has swept MOST of the nation this summer. If you are not familiar with Pokémon Go, it as a game of 'augmented reality' (it incorporates your actual location into the game through GPS), that is downloaded through an app on your phone. Once downloaded, you catch and collect adorable cartoon-looking monsters with an apparatus called a Poke ball. The game has been lauded for sending millions of American couch potatoes literally on the "go", taking them outside for exercise, fresh air, and socialization with other players.

Lately, we have found ourselves walking around Crane's Roost, collecting these little pocket monsters, even when our daughter isn't around. During these walks, I couldn't help noticing that my husband and I were on the 'ehem' mature end of the player spectrum as members of the sandwich or "in between" generation. Occasionally, I spotted a silver-haired player in the company of their adult kids or grandchildren, but for the most part we found ourselves in the company of young families, or twenty and thirty somethings. Working for the Jewish Pavilion, a non-profit that brings community connection to elder-care residents, I tend to notice when this large population is under-represented, and during our nightly "poke-walks" the baby boomers were not booming the recognizable hum of the Pokémon theme song from their cell phone's speakers.

In an effort to even out the generation gap, I called my friend, Ruth Darvin, who is quite the savvy senior, with a background in computer programming going back to the 1960s when she was an early systems engineer with IBM and then Westinghouse. Ruth kindly accepted the challenge to learn to play Pokémon Go, and even turned down a date with friends, sharing she was excited to learn something new.

We met Ruth at Winter Springs Town Center, a middle ground between our homes. We sat at a table and each developed an avatar or a player that represented ourselves. Ruth enjoyed picking out her player's hairstyle, helmet and backpack.

The real fun began once we started walking and our phones began to vibrate, letting us know there was a Pokémon to be caught in the area. We both pressed the image of the small creature on our screen. We rolled our first poke-balls, and VICTORY! We had each caught and collected our first Pokémon. We strolled around the perimeter of the Town Center capturing several more Pokémon and stopping at "Poke-stops" to collect more Poke-balls.

As we returned through the center of the mall, we found the socialization that we had heard so much about. Three adorable children approached us, asking, "Are you playing Pokémon Go?" They were all between the ages of five and seven, and they each had had a piece of advice to hand up to us new, novice players. Seven year-old Madison reminded us to delete some of our balls when our backpacks became full. We also learned it was "bestest" to collect as many Pokémon as possible.

As our walk came to an end, I wondered if Ruth would keep on the "go" with her newly downloaded app. She shared that she was looking forward to using her new skill as a way to bond with her teen-aged and millennial grandchildren at a family reunion at the end of the week. Ruth noted, "The game is cute, it gets you walking, and I made new friends."

When we last spoke, she was excited to walk around her neighborhood and pocket some more Squirtles, Wild Pidgeys and Weedles with friend, Diane Baum, who learned the game from her eleven-year-old grandson. I caught up with Diane at meeting this week at Brookdale Horizon Bay/Lake Orienta, and she shared that she became an "accidental" Pokémon Go player, when her grandson's phone would not download the game. Though Diane does not have Ruth's computer background, she had no problem downloading the app on her own, allowing her grandson to play on her phone, creating an unexpected bonding experience between grandmother and grandson. What surprised her most about the game was that she has continued to play long after her grandson returned to his home town.

Currently, Diane is ambulating with a cane due to back complications, but she still manages to play with limitations. Catching Pokémon has also motivated her to take short walks to increase her mobility. Following our "poke-chat", she was off to Altamonte Mall to re-fill some Poke balls, and get in a little exercise at the same time.

Recently, I learned from a clip on WESH 2 News that a senior facility (Debary Health and Rehabilitation) in Volusia County is motivating its rehabilitation patients to get physical with a game of Pokémon Go, too. I was happy to discover that this game is getting all generations on the move.

Tidbits from the Sandwich Generation is a series of blogs about managing the multi-generations by Pamela Ruben, Marketing Director and resident blogger for the Jewish Pavilion. If you are sandwiched in between raising a family of children or young adults, and caring for aging parents, take a bite out of life with this new blog! Just a 'tidbit' is recommended for anyone who spends time with older adults, or is preparing for life's next stages. Laugh, cry, and relate as our blogger is pulled from all sides by family members young and old. Check out additional posts at http://www.jewishpavilion.org/blog. Contact Ms. Ruben with comments or questions at pamelawritingteacher@gmail.com.

The Jewish Pavilion,www.jewishpavilion.org, is the community connection for elder-care residents in more than 70 facilities throughout Greater Orlando. The Pavilion's Orlando Senior Help Desk, http://www.orlandoseniorhelpdesk.org, is a no-cost resource for older adults and those who care for them.