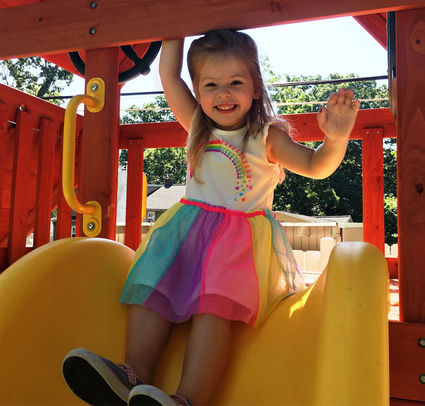 (Kveller via JTA)-Since our daughter Miranda was adopted, I did not get to see her enter the world. We heard she was born from our social worker and excitedly packed up our car and headed a few states over to meet her. She was a day old when we first laid eyes on her. The very next day she was discharged to our care.

What I did get to witness, however, was her entrance into the Jewish world. And it was magical.

Just two years prior, Miranda's older sister, Allison, was born still at 37 weeks. I had a relatively easy pregnancy and we could not wait to meet our daughter. To say we were excited is an understatement. Tragically, I realized one day that I was feeling her less and less, so we rushed to the hospital to see what was going on. She was already gone.

I delivered my first daughter via C-section after a full day of labor, and the grief was so intense that I had trouble conceiving again. All sorts of fertility treatments failed until my husband and I both decided that we wanted to be parents and did not care how our child came into the world. We called an adoption agency the next day.

Fate was on our side. We were picked by Miranda's birth mother just a few weeks after we had completed our home study and piles of paperwork, and our second daughter was born just a few weeks later.

We had to wait until everything with the adoption was finalized before we could convert Miranda. Then I had to find a mikvah that would perform the ritual ceremony. It was a little difficult as I was not a member of any synagogue. That, combined with the fact that my husband is not Jewish, made it a little tricky. So I called backup (my mom), and within a few days we were all set. The rabbi at the local synagogue where we used to belong said he would be honored to convert our daughter to Judaism.

The mikvah was in a synagogue about 45 minutes away. It was essentially a little pool. Upon entrance, the woman who runs it greeted us warmly and showed us where we needed to go. I changed into my bathing suit and we stripped down Miranda. Mind you, all of this happened in the middle of one of the coldest winters in 20 years, so it's a good thing the pool was heated.

When it was time, Miranda and I entered the warm water. My husband and mom were there to witness the joyous occasion. Once in the water, three rabbis came in to witness the ceremony. There were a few prayers to say and I stumbled through them; I was so nervous. Before I knew it, I dunked Miranda under water-I had to let go for a second so she would not be touching me at all. Talk about nervous. But she loved all the attention and did not seem to care one bit. One more prayer, one more dunk, and then lots of applause.

It was over. Miranda was converted.

I felt proud, excited and jubilant at the same time. I felt that I had done right by my daughter.

The rabbi said not to look at it like that. Miranda is what we want her to be and this conversion just made it "official." His wife, also a rabbi, said Miranda's soul was Jewish and now the rest of her was as well.

I was practically floating on the ride home. It was such a wonderful and beautiful experience. Now we have a certificate declaring her conversion. A few months later we had a naming ceremony as well. All of these traditions are a way to keep the celebration of her conversion going and to continuously welcome our daughter to the Jewish community more and more.

So I got to witness a beginning for Miranda: the beginning of a commitment to a religion that means so much to me.

Here is the English of the second prayer we recited:

"Blessed are You, Lord our God, King of the Universe, who has granted us life, sustained us and enabled us to reach this occasion."

Samantha Koellhoffer is a freelance writer living outside of Philadelphia with her husband and daughter. She blogs here and Time 2 Mom Up, and is currently working on a book about the highs and lows of motherhood. #time2momup

Kveller is a thriving community of women and parents who convene online to share, celebrate and commiserate their experiences of raising kids through a Jewish lens.Visit Kveller.com.