Federation celebrates a year of growth at Annual Meeting 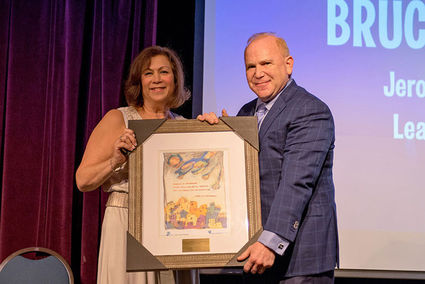 More than 150 friends and supporters of the Jewish Federation of Greater Orlando (JFGO) attended the nonprofit's Aug. 17 Annual Meeting on the Maitland Jewish Community Campus.

Themed "A Meeting of the Minds," this year's gathering featured entertainment by "Mentalist to the Stars" Sidney Friedman, who wowed the crowd with some of the mind-boggling feats that have made him a popular draw at Jewish agencies and Federations across the country.

Jeannie Leavitt and Yeosh Bendayan, both Federation board members, served as emcees. Leavitt and Bendayan added their trademark comic flair to the event, kicking off the show portraying a discount fortune teller and a wayward mime (who misunderstood the evening's theme). This was the third year the duo hosted the proceedings.

The Annual Meeting managed to get some serious business accomplished as well. Federation elected or re-elected board members and officers for the 2016-17 term:

• Tara Harris (representing The Roth Family JCC) and Danielle Krise were welcomed to the board as new members; former officers Ryan Lefkowitz and Jeannie Leavitt were re-elected as at-large members.

In her remarks, Forest reviewed some of the highlights of the past year, a year in which collaboration and outreach fueled Federation's efforts:

• JFGO connected with more than 1,300 people through 42 different outreach events.

• JFGO awarded 19 collaborative community grants totaling $75,000. Nine of the grants were for programs and services for the elderly.

• JFGO provided financial support totaling $290,000 to assist the Jewish Academy of Orlando with its operational costs.

• Two events by Our Jewish Orlando, JFGO's young-adult group, merited mention by the Jewish Federations of North America in its national newsletter.

• Federation's Shalom Families/PJ Library program has been prominently featured on the national PJ Library website, in its social media and its quarterly magazine.

Forest said JFGO remains focused on ensuring the best possible security for the Maitland Jewish Community Campus, an ongoing initiative that took on added significance in the wake of the June terror attack at the Pulse nightclub. "For the past eight months, we have been working together with campus agencies, the Department of Homeland Security, the FBI and the Maitland Police to make sure we have a proper security and emergency preparedness plan in place," Forest said. "As the owner and manager of this campus, your Federation is committed to keeping you safe."Forest also discussed some of Federation's goals for the coming year, including a ramping up of the public phase of the Campus 2020 Debt Retirement Campaign. Other plans for 2016-17 include:

• A second Community Leadership Session, scheduled for this month.

• A "Friends of PJ Library" initiative to encourage grandparents to get more closely involved with the program. Initial meetings for the group, headed by Dr. Edward Zissman, began in August.

• A December trip to Israel for 24 Central Florida Jewish moms, a joint venture with J.O.IN Orlando that is organized by the Jewish Women's Renaissance Project. Sixteen women embarked on a similar trip last October.

• A community garden. "Our gardeners are teens, adults and seniors, and our agencies will be the recipients," Forest said. "The (Roth Family) JCC and JAO students will have the opportunity to learn about growing and sharing.

• A women's group trip to Charleston, S.C., in the spring.

• Forest's full remarks, as well as nearly 100 photos from the Annual Meeting, are available on the Federation's website, http://www.jfgo.org. A copy of JFGO's 2015-16 Annual Report & Financial Snapshot is also on the site.