A one-man tribute to Leonard Bernstein comes to the stage 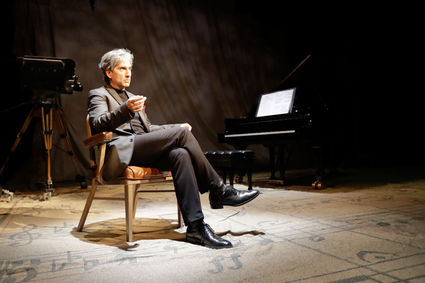 LOS ANGELES (JTA)-There is a remarkable moment in "Maestro," Hershey Felder's one-man show about Leonard Bernstein, when the late famed conductor-composer is shown in an old film clip on a giant screen and the two perform a seamless piano duet from Richard Wagner's "Tristan and Isolde."

The tour de force characterizes the fusion between Bernstein, who died in 1990 at 72, and Felder, very much alive and lively at 48.

"Maestro" opens off-Broadway (59E59 Theaters) on Sept. 1 for a six-week run and will tour cities throughout the United States and abroad in the future.

The multitalented Felder, who sings, acts and plays the piano in a combination of biographical narrative and concert, seems confident he will remember his lines. After all, he tells an interviewer, "I've impersonated Lenny Bernstein on stage some 600 times."

However, even those who have seen Felder tributes to Bernstein will find different nuances and characterizations in the upcoming New York presentation.

"The tone of each performance depends on the reaction of the audience, so my job never gets easier, only harder," Felder said, but he hopes the result is "a more realized piece."

There are some actual parallels in the lives of the two men. Both grew up in Yiddish-speaking homes, the sons of Eastern European immigrants and in tightly knit Jewish communities-Bernstein in the Boston area, Felder in his native Montreal.

A recurrent shtick in the show is Bernstein's Ukraine-born father agonizing how his son is ever going to make a living as a musician.

The show follows Bernstein from his admission to Harvard (squeezing in under the 10 percent Jewish quota), to his first steady job as assistant conductor of the New York Philharmonic, to his triumphs as a composer both of classical music and classic Broadway musicals.

There is the historical date of Nov. 14, 1943, when in a pure Hollywood fantasy, a hung-over Bernstein is awakened by a phone call telling him that the evening's scheduled conductor, Bruno Walter, has suddenly fallen ill and that he, the 25-year-old Lenny, must wield the baton at 3 p.m. Bernstein, of course, triumphed and the rest is history.

"Maestro" introduces the great conductors who influenced Bernstein, each infused by Felder with a distinct personality and different European accent.

We meet the likes of Walter Damrosch, Dimitri Mitropoulos, Fritz Reiner ("With the permanent expression of a man who had sex once and didn't like it," says Felder), Walter and, above all, the beloved music director of the Boston Symphony Orchestra, Serge Koussevitzky.

On another level, there is Bernstein the composer, whose works, such as "Jeremiah," "Dybbuk Suites" and "Kaddish," reflected his deep Jewish roots.

From a world-renowned classical conductor, Bernstein turned to the musical stage with works ranging from "On the Town" to "Candide" and the triumphant "West Side Story," a modern-day version of "Romeo and Juliet." (Bernstein originally cast the warring clans as Jews vs. Catholics, but cooler heads prevailed, "so we threw out the Jews and brought in the Puerto Ricans," Bernstein is quoted as saying.)

On a third level is Bernstein, the complex and conflicted human being. He was happily married to the Chilean-born Felicia Montealegre, the mother of his three children, but made little effort to hide his liaisons with men.

"Maestro" opens with Bernstein on his deathbed. Felder believes that for all the worldly acclaim, the celebrated musician pronounced a harsh judgment on himself. Perhaps his greatest sorrow was that he never composed the one classical masterpiece that would immortalize his name, Felder said.

In his later years, "Bernstein also suffered from strong feelings of guilt," Felder believes. "He shoved [his affairs with men] down Felicia's throat and he didn't care how devastated she was."

"Maestro" runs nearly two hours, without an intermission, and the sheer physical stamina required for the one-man play is astonishing. Even more so as Felder throws himself into the role with unreserved physical and emotional passion that stops just short of going over the top.

In addition, Felder transmits a real feeling for the creative processes underlying the arts of conducting and composition.

Over a span of 19 years and some 4,500 stage performances, Felder has also interpreted the lives and works of Beethoven, Chopin and Liszt, as well as Irving Berlin and George Gershwin (Felder introduces the latter by his birth name, Yankele [Jacob] Gershowitz.) In addition, Felder presents his own works, including the concerto "Aliyah," the opera "Noah's Ark" and "Love Songs of the Yiddish Theatre."

Next on Felder's intense schedule is his musical and biographical homage to "Our Great Tchaikovsky," which will premiere next year.

When not touring, Felder lives in Paris and New York with his wife, Kim Campbell, the former Canadian prime minister, whom he met while she was serving as her country's consul general in Los Angeles.

"Maestro," directed by Joel Zwick, will run through Oct. 16, with Felder's signature "The Great American Songbook Sing-Along" added as an occasional bonus.