A Sephardic seder, of sorts, for Rosh Hashanah 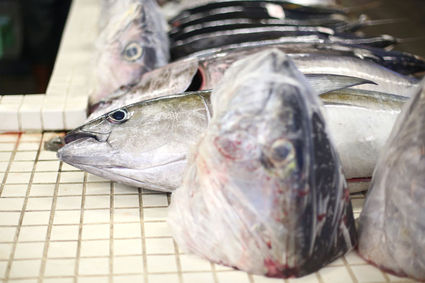 Fish heads are commonly included in the Sephardic custom of "yehi ratzones."

LOS ANGELES (JTA)-For Rosh Hashanah, many of us eat an apple dipped in honey as an auspicious sign for a sweet new year. The symbolism is clear, and the ritual as easy to pull off as squeezing a bear-shaped plastic bottle of honey.

But what kind of a year could you expect from eating leeks, spinach and a fish head? A year of being a contestant on "Chopped"?

Many Sephardic Jews practice a custom at Rosh Hashanah dinner called "yehi ratzones"-"may it be God's will"-which calls for a kind of mini-seder in which a special blessing is said before eating certain ceremonial foods. Though it's a custom practiced mainly by Sephardim whose forebears lived in the Ottoman Empire, the idea of eating these special foods at this time of year can be found in the Babylonian Talmud, which mentions that certain fruits and vegetables should be seen on our Rosh Hashanah tables.

My wife, Brenda, is half Sephardic-her father's family came to the United States from the Greek island of Rhodes-and since she invites her entire extended family over for dinner the first night of Rosh Hashanah, I thought that we could include the custom this year.

After all, much like apples and honey, the symbolic foods eaten for yehi ratzones-including, yes, the aforementioned fish heads, as well as the likes of black-eyed peas and dates-taken as a group also represent the hope for a good coming year. Who wouldn't want to say amen to that?

But I should have known, like any other change in family custom-Talmudically sanctioned or not-negotiation would be involved.

When I brought up the idea to Brenda, she told me she had never heard of the custom. Not only that, but some of the yehi ratzones foods-notably spinach, traditionally served in her family in the form of a cheese-free "quajado" (a kind of spinach kugel) and fried leek patties, were found "on the family's seder table, not at Rosh Hashanah," she told her completely Ashkenazi husband. (Meanwhile, I suddenly realized that after decades of marriage, I had been living in a multicultural home.)

Looking for cover, I called Brenda's Uncle Lou, who didn't remember practicing the custom, either. But he did recall growing up with dates and pomegranates-two of the foods used in yehi ratzones-always on his mother's Rosh Hashanah table here.

"You see? Your family practiced part of the tradition," I said, hoping that would settle it.

"But how do you do it?" Lou asked, warming slightly to the idea.

I didn't know, but looking for an answer, I called Ty Alhadeff, the coordinator of the Sephardic studies program at the University of Washington. A third-generation Rhodesli-as descendants of the Sephardim from Rhodes are called-and a member of Seattle's Congregation Ezra Bessaroth, which practices the customs of the Rhodes traditions, I thought he could explain the ins and outs of yehi ratzones.

Within the first minute of our conversation Alhadeff said, "From generations back, I'm related to the Hassons"-my wife's family. I knew immediately I had found the right guy.

Alhadeff helped me understand that the pairing of blessings and foods during yehi ratzones is, at its heart, Hebrew and Aramaic wordplay. Puns, really, that rely on certain words for foods sounding similar to certain Hebrew verb forms.

For instance, the Aramaic word "squash" is "karah," he explained. The Hebrew word connecting it to the blessing is "karah," a form of the verb meaning "to tear." Therefore, when we eat squash during the seder, the accompanying blessing is "May it be Thy will... You should tear up our evil decree, and let there be read before You, our merits."

A bit more of a stretch is the Aramaic word for leek, "karati," and the Hebrew word "Yikaretu," cut off, as found in the blessing: "May it be Thy will... to cut off our enemies."

As for the fish head-Alhadeff said he uses fish cheek instead-it's because the word for head, "rosh" (as in Rosh Hashanah, literally "head of the year") figures into the yehi ratzones blessing "May it be Thy will... that we may be on the forefront as the head and not in the background as the tail."

Alhadeff told me there have been some attempts at reinterpretations of the yehi ratzones blessings, which shift the meaning while staying true to the specific foods.

"It's not about the evil decrees being cut," he said.

For example, Alhadeff said he found a blessing for squash that says "May the coming year grow as a gourd in the fullness of blessing."

I was inspired. But getting back to the more mundane issues of how exactly we'd get this stuff ready for a group of 30, I asked him how the Alhadeff family gets it done.

"There is a division of labor," Alhadeff said, noting that he makes the leek patties and his wife the pumpkin (squash) bourekas. The two share the shopping.

As my wife and I discussed the coming dinner, we decided that for our first yehi ratzones, we would take our cue from the Alhadeffs: sharing the work would be the added blessing to our observance. Also, knowing that some variation was OK, we decided to pick just a few foods that would be familiar to the family.

Brenda agreed to cook the spinach quajado. I called her sister, Holly, and though she also reminded me her family only ate these foods on Passover-they are sisters, after all- she said she would make the the leek patties using her grandmother's recipe.

Not wanting to fill everyone up on pumpkin-filled anything, I settled on buying shelled pumpkin seeds, pepitas, to pass around. I figured everyone could benefit from the "fullness of blessing" concept before sitting down to our tried-and-true dinner of turkey, okra, Persian rice and salad.

Of course, having our evil decrees cut wouldn't hurt, either.