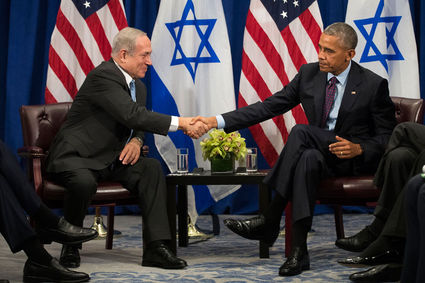 WASHINGTON (JTA)-When President Barack Obama and Prime Minister Benjamin Netanyahu met for what was likely to be the last time as leaders of their countries, the most important thing they said was "see you soon."

Netanyahu's invitation to Obama to visit Israel post-presidency augured a thaw in U.S.-Israel relations, which was also seen in remarks by Israel's diplomatic corps and signals from the pro-Israel lobby.

Their friendly, relaxed interaction was in marked contrast to meetings like the one in 2011, when after Obama called for talks based on 1967 lines, Netanyahu lectured the American president in the Oval Office about Middle Eastern realities and Obama clutched the arm of his elegant chair seemingly to keep himself from decking the Israeli leader.

Much of their chatter this time, at least in the open part of the meeting Wednesday in New York on the sidelines of the U.N. General Assembly, was about Netanyahu's invitation to Obama and Obama's ostensible eagerness to accept it.

More saliently, Netanyahu made it clear he understood the transformational impact that the country's first black president would have on the American left and on Democrats, and how important it was to Israel to restore and burnish ties with that political sector.

"Your voice, your influential voice will be heard for many decades, and I know you'll continue to support Israel's right to defend itself and its right to thrive as a Jewish state. So I want you to know, Barack, that you'll always be a welcome guest in Israel," Netanyahu said, and teased Obama about a favorite pastime. "And by the way, I don't play golf, but right next to my home in Caesarea in Israel there's a terrific golf course."

Obama said he "very much appreciated" the invitation.

"I will visit Israel often because it is a beautiful country with beautiful people," he said. "And Michelle and the girls, I think, resent that fact that I have not taken them on most of these trips. So they're insisting that I do take them. Of course, they will appreciate the fact that the next time I visit Israel, I won't have to sit in [bilateral meetings] but instead can enjoy the sights and sounds of a remarkable country."

Which is not to say the meeting was a Seinfeldian one, about nothing. Reports said the closed meeting saw more sparring between the two men on Israeli settlement building-although in his public remarks, Obama also acknowledged that the issue was one that would soon be out of his control and that Netanyahu had the upper hand.

"Obviously, I'm only going be to be president for another few months," he said. "The prime minister will be there quite a bit longer and our hope will be that in these conversations we get a sense of how Israel sees the next few years, what the opportunities are and what the challenges are in order to assure that we keep alive the possibility of a stable, secure Israel at peace with its neighbors, and a Palestinian homeland that meets the aspirations of their people."

In his speech the day before at the United Nations, Obama mentioned the Israeli-Palestinian impasse in passing, and notably blamed Palestinian incitement as much as he did Israel's settlement policy.

It was anti-climactic after months of fevered speculation in Israel and the pro-Israel community that Obama would in his last months launch a new major initiative on the issue, possibly through a U.N. Security Council resolution outlining the parameters of a final status two-state agreement.

That's an approach Netanyahu abhors, warning the General Assembly in his own speech there Thursday, "We will not accept any attempt by the U.N. to dictate terms to Israel. The road to peace runs through Jerusalem and Ramallah, not through New York."

On the eve of Obama's speech, 88 U.S. senators urged the president to veto any "one-sided" Security Council resolutions and to generally avoid pressing for peace talks absent an initiative by the Israelis. The letter was shaped by the American Israel Public Affairs Committee, a pro-Israel lobby.

The back and forth on Wednesday between Obama and Netanyahu was extraordinary in and of itself after eight years of a relationship that more often than not was fraught.

Ron Dermer, the Israeli ambassador to Washington and one of Netanyahu's most trusted advisers, said as much last week just before Israel and the United States signed a defense assistance agreement that guarantees Israel $38 billion over the next 10 years.

"Despite not seeing eye to eye on Iran, this speaks to the strength and power" of the relationship, Dermer said of Obama's backing of the assistance agreement. "The fact he's signing it means we'll have the backing of the entire American people-the broadest possible support."

Dermer, meanwhile, has plunged himself into cultivating black Democrats, who saw Netanyahu's March 2015 speech to Congress lambasting Obama's Iran policy as a deep signal of disrespect to the president.

More broadly, Israel and the mainstream pro-Israel community are nowhere near as eager to assist Republicans in isolating and embarrassing Obama as they were a year ago, when Netanyahu and AIPAC led opposition to the Iran deal.