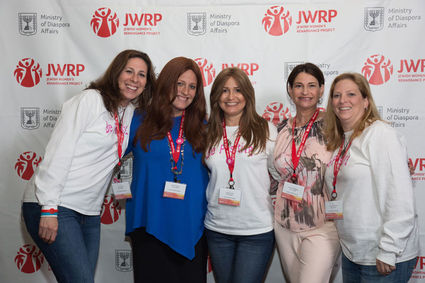 The JWRP Leadership Conference, held in collaboration with Israel's Ministry of Diaspora Affairs, gathered Jewish women from across the world to hone their leadership skills and create a global Jewish women's movement. The annual conference was launched in 2013 with 65 participants from the U.S., Canada and Mexico, and has grown to include some 300 people from nine countries, including Australia, Cuba, Greece, Israel, Panama, Russia, Spain, South Africa and the U.S., this year.

During the event, JWRP honored Lihi Lapid, an acclaimed Israeli feminist author, and Rachel Fraenkel, the mother of a slain Israeli teenager who became a national symbol of hope, with the Pamela Claman Leadership Award. This JWRP award is given to international role models who have significantly shaped the Jewish world with exceptional and inspired leadership and serve as role models for Jewish women around the world.

"Rachelle and Lihi both speak on our Momentum trips, and are true examples of Jewish women from diverse worlds who know what it means to love one another based on the values they share," said Lori Palatnik, founding director of the JWRP.

Among the featured speakers were Mindy Scheier, founder of Runway of Dreams, which designs adaptive clothing and who joined the first JWRP Fashion trip this summer; Ariel Halevi, founder and co-owner of Vayomar, an Israel-based communications consulting firm; Charlie Harary, an entrepreneur, philanthropist and leader of the JWRP Momentum men's trips; Gidi Grinstein, founder and president of the Reut Institute, a non-profit strategy group focusing on Israel and Jewish issues; Janine Kurnoff, founder and principle of the Presentation Company, a communications consulting firm; Dr. Zeev Ben Shachar, director of Israel education at Hebrew University; and others.

The JWRP brings Jewish mothers on life-changing Momentum trips to Israel, with support from Israel's Ministry of Diaspora Affairs, to inspire them to change the world. Since 2009, more than 8,000 Jewish mothers from 150 partner organizations in 26 countries spanning several continents including Australia, Africa, Europe, North America, and South America have experienced the Momentum trips. Participants commit to getting involved in activities when they return home, including community events, Israel engagement programs, Jewish education, global learning, leadership development and Momentum Israel missions for husbands.