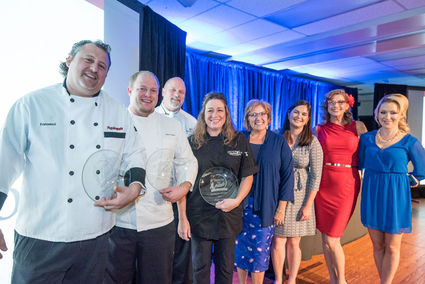 If you have ever watched any of the television shows on the Food Network-shows like "Chopped," or "Cutthroat Kitchen"-you have a glimmer of an idea as to what JFS Orlando's Pantry to Plate Chef's Challenge is all about (except no one is "chopped" and it isn't cutthroat). Three area chefs from well-known restaurants each select food from the Pearlman Pantry and prepared an outstanding dish for three judges and all the guests (about 160 of them) to decide which dish was the best based on creativity, taste and presentation.

The preparation of each meal was filmed earlier and then shown on widescreen monitors so the audience saw exactly how each meal was prepared. Torres commented on the exceptional videoing, produced by Brandon Kari of Brandon Kari Productions.

Then the tasting began.

The second course, prepared by Chef Julie Casey of Outpost Neighborhood Kitchen, was Balsamic Chicken and Hash. This yummy dish had a potato/brussel sprout/meat hash served with a tender chicken breast that was covered with a grilled watermelon salsa. (The grilled watermelon was a hit).

Last but not least, the third course was Spezzatino Di Carne, concocted by Chef Francesco Aiello of Francesco's Restaurant. It was a simple dish-ground beef, peas and potatoes blended together-that had exceptional flavor. Everyone at my table loved this dish the most.

In fact, it was the favorite of the three judges-winning Chef Francesco the Top Chef Award. He graciously accepted the award saying he was here for a very good cause.

The People's Choice award went to Julie Casey with her Balsamic Chicken and delicious watermelon salsa.

In case you were wondering if any food was left in the Pearlman Pantry, the chefs selected the food to use from the Pantry and made the original dish, then Whole Foods supplied the vast amount of food needed to prepare meals for everyone.

Throughout the evening, guests kept checking their iPhones or smart phones to see where they stood in the silent auction bidding.

The pantry to Plate Chef's Challenge is an exciting evening of fun, food and fellowship. Watch for it next year and give your taste buds a treat, while raising money for a worthy cause (in 2015, JFS Orlando provided 65,000 meals through the Pearlman Emergency Food Pantry!).