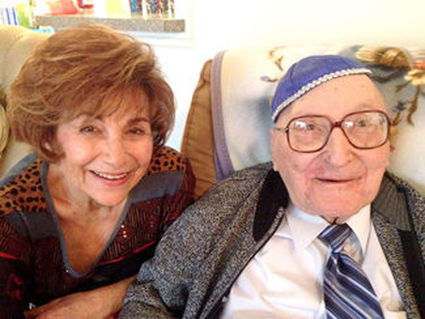 For many years, Rabbi Adler was the heart of this Jewish community.

In his eulogy for Rabbi Adler, Rabbi Rubinger shared that when Rabbi Adler retired, he agreed to serve as the interim rabbi at the Southwest Orlando Jewish Congregation. His son-in-law, Paul Wallach, asked him why he would take on this task since he was now retired. Rabbi Adler told Paul he had helped carry out Torah scrolls from burning synagogues on Kristalnacht in Berlin and he made a solemn pledge in his heart that he would always work to help build Jewish life no matter where his life took him. And that is exactly what he did-in Canada, in Cleveland and here in Orlando.

My zaydie was an extraordinary man. When I reflect on his life, I marvel at his strength and perseverance, his sustained faith, and the drive that led him to touch so many lives, bringing as many people as he could closer to the torah. I wonder how he survived with his relationship with Judaism and God intact as he traveled north from Nazi Germany to Liverpool, England with his yeshiva, leaving his parents behind. I struggle to understand how he endured during the tumultuous voyage over the Atlantic Ocean to Toronto, eating only pickled fish and gasping sea air. I can't fathom what it does to a person to finally make it safely to North America, only to be thrown into an internment camp for German nationals and always having to sleep with one eye open.

But through all of this, my zaydie kept his faith in God and in people. In Germany, in 1933, which was the year Hitler rose to power, he celebrated his bar mitzvah. In Liverpool, England, he learned to be a brilliant student of Talmud and earned semicha, rabbinic ordination. In the internment camp in Canada, he kept pages of Talmud folded in his sock so that he could retreat to a secluded part of the forest and study. And when he was finally released, he met my Bubbie Rose at a young Judea meeting in Toronto, and she took on his life so whole-heartedly that his relationship with faith turned into a team effort. With her by his side, he moved from pulpit to pulpit until ending up here in Orlando, with three beautiful children in tow, and they truly created a life for themselves that was their response to my earlier questions. How do you exist in a world [that] tells you it hates you, that it finds your very existence to be an abomination, that wishes for the destruction of your entire nation? You do what my zaydie did with the life that God granted him. You make your mark on the world by breathing life into generations to come, by teaching Torah, by loving God's creatures.

Many of you knew him as a very serious man. I've seen photos of him from several decades ago with a stern expression, wearing a stiff robe and tall hat. I know that being sent to his office for bad behavior during religious school was dreaded among his students. But I knew him as my zaydie who absolutely adored his grandchildren and wasn't afraid to let his hair down with us-and I assure you, I mean this completely metaphorically!

My mother told me about a photograph of 3-year-old me in a pink leotard and tutu, practicing my plies, with my zaydie, in a matching tutu, striking the same jaunty pose. I remember many years of Grandparents' Days, when my bubbie and zaydie would drive to Tampa and spend time at school with us, and we would all feel overwhelmed with joy. We took summer trips together, explored bodies of cold water all over the northeast, and my zaydie would barely get a toe in, when he would say "woo woo woo" and hastily retreat to his towel. But if the pool temperature was more to his liking, he would tell us to hold onto him like a lifeboat, and so we would merrily float around, never letting go of his shoulders. I remember his joy and pride as I chose to cast my lot as a rabbi, I remember how happy he was to meet my beloved Adam, and spent an entire lunch at Sweet Tomatoes talking to him about the merits of learning the laws of shechitah, ritual slaughter, of all things. I remember dancing with Zaydie at our wedding, with tears falling down my face, because no one thought he was going to make it to June 2012. And finally, I remember bringing our daughter Hannah Rose to meet her great-zaydie last summer, and seeing the joy on his face as he played with her toes. No doubt about it, my zaydie loved us.

And when I think about the way that my zaydie helped me discover the deep wisdom and profundity of Judaism, I wonder if I'll ever understand the extent to which he set me on my own path to the rabbinate, both in the love that he passed through my mother, and through his own teaching.

When I was eight years old, he gave me his bar mitzvah tefillin, and they are still one of my most cherished possessions. It was with these tefillin that I fell in love with the mitzvah of binding our tradition's holiest words to my body with the same soft, supple straps that my zaydie used for so many years. These tefillin, that had taken the same world-weary path as my zaydie from Germany to Orlando, followed me from Tampa to Camp Ramah, USY conventions, to college in New York, to London, and finally to rabbinical school.

But when I spoke about my devotion to these ritual objects in my rabbinical school interview, the rabbis who sat across the table from me mentioned that these tefillin that I lovingly blessed and wore were probably passul, that they were so worn that they were no longer kosher, and that I had been saying brachot levatalot, wasted blessings, over them. This moment is still so vivid in my memory, as my nervous sweat suddenly turned icy and my heart grew hot. To me, these tefillin carried so much more value, were so much MORE kosher than a brand-new set that hadn't seen the story of my zaydie's journey of strength and faith. So what if some of the letters were illegible or the leather straps were wearing thin? I was enraged at the idea that they were no longer fit for ritual use, that any blessing said over them would be taking God's name in vain.

And now, as I think about my zaydie's departure from this world, I realize: Only a holy object can become passul. Our halakha teaches us that a sefer Torah with even one blurry letter is passul, but that it should still be kept in the aron kodesh, in the ark, with the other kosher scrolls. It is no longer read publicly, but still remains in sacred space. Even items that have become passul retain their core of holiness.

This is my zaydie now; the earthly vessel that enshrined his soul is now passul, but the contents of his neshama live on. He can no longer serve as our rabbi, our father, our zaydie, our friend, our teacher, but everything he taught us is still intact, and his legacy continues to shine brightly. What I realize now is that we all must become the new boxes and straps, the shiny, kosher vessels for his Torah. And with the outpouring of love that my family has received over the last few days, I know that we are all up to this task.