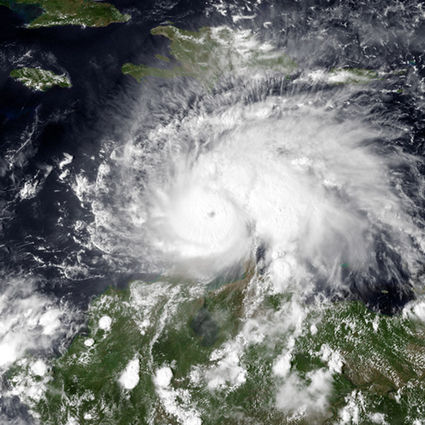 (JNS.org)-Florida's 550,000-strong Jewish community was bracing for the worst as Hurricane Matthew bombarded the Sunshine State early Friday leaving one dead and over a half million residents without power.

The deadly Category 4 storm-downgraded to Category 3 by mid-morning-blasted the Florida coast with winds as high as 120 miles per hour after wreaking havoc through the Caribbean.

Many Jewish communities canceled their religious services for Shabbat, boarded up homes and businesses, and evacuated where necessary. Those that stayed hunkered down, riding out the threat of storm surges and flooding as the hurricane pummeled the state.

With the threat of storm surges and flooding, congregations have also taken care to protect their Torah scrolls. Rabbi Zvi Konikov, who co-directs Chabad of the Space & Treasure Coasts in Satellite Beach, Fla., said the Torah scrolls in his Chabad house were "taken to a safe place." Other Chabad centers in parts of Florida unaffected by the storm have also opened their doors to evacuating Jews.

"Given that we are currently in the 10 days of repentance, I suggest that we all have our own in-home farbrengens [Yiddish for a joyous occasion] and utilize the time we have together with our families to pray a little bit more, learn a little bit more, and try and put a positive perspective on it," said Rabbi Ruvi New, co-director of Chabad of East Boca Raton.

In Haiti, the hurricane has left 842 dead with some 61,500 remaining in shelters, Haaretz reported Friday. In the U.S., states of emergency have been declared in Florida, Georgia, South Carolina and North Carolina. More than 1.5 million Floridians and visitors were under evacuation orders, the Weather Channel reported.

The storm was moving along the southeast coast from Florida into Georgia and the Carolinas where coastal residents there are under evacuation orders.

Florida Gov. Rick Scott warned Thursday that, "This storm will kill" those who don't follow emergency guidelines or evacuate where necessary. A 58-year-old Saint Lucie County woman, who suffered cardiac arrest early Friday morning, died as a result of the storm, officials said.

Meanwhile, on the heels of the American Jewish Joint Distribution Committee (JDC)'s mobilization earlier this week to provide relief to hurricane victims in Haiti, the British humanitarian organization World Jewish Relief has also launched donation appeal. Donations will be used for food and water, shelter and hygiene kits, and other supplies.