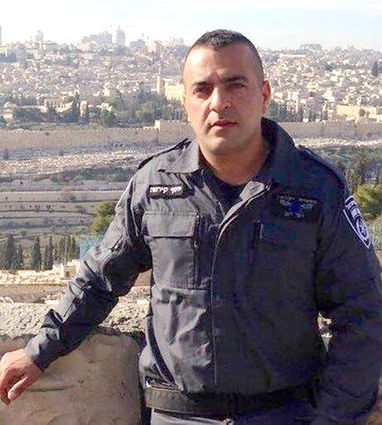 Israeli police officer Yosef Kirme, 29, who was killed in a shoot terror attack on Sunday in Jerusalem.

JERUSALEM-A police officer and a civilian were killed and six were wounded during a drive-by shooting in Jerusalem this weekend, raising concerns about the possible resumption of the wave of lone wolf terror attacks that convulsed Israel earlier this year.

Yosef "Yosi" Kirme, 29, and Levanah Malichi, 60, were killed in the attack, which occurred at the Ammunition Hill light rail station on Sunday when a Palestinian man drove past spraying bullets from a car. Malichi, who was waiting for the train, was killed at the station, while Kirme, a police officer, was shot while pursuing the assailant.

Kirme was buried on Sunday evening at Jerusalem's Mount Herzl cemetery alongside fellow fallen IDF officers. Last December, he was recognized for stopping a terror attack.

Malichi retired in 2010 from working 30 years in the Knesset. She was the mother of three and grandmother of six.

The terrorist, identified as Musbah Abu Sbeih, 39, was reported to have been due to begin a four month jail term for incitement on Sunday. Public Security Minister Gilad Erdan announced shortly after the attack the suspect had a blue Israeli identification card on him, meaning he was either a citizen or legal resident of eastern Jerusalem. Erdan also stated that there had been no prior warning that such an attack was imminent.

Abu Sbeih was killed by security forces during a gun battle in the capital.

In the wake of the weekend's attack, security precautions were ramped up, particularly in east Jerusalem, police spokesmen said, especially given the upcoming Yom Kippur and Sukkot holidays.

The attacks sparked celebrations among Palestinians with residents of the Gaza Strip photographed handing out candy in the street.

Fawzi Barhoum, Hamas' spokesman in Gaza said, "This heroic act bears witness to our determination and shows the Jerusalem intifada is not over," Israel Hayom reported.

More than 40 Israelis have been killed in attacks over the course of the last year in what's known as the "stabbing intifada" that began in September 2015, where terrorists used improvised weapons such as scissors and kitchen knives. Some 240 Palestinians, many of them assailants or participants in violent riots, were also killed during the same period.

Palestinian Authority President Mahmoud Abbas' Fatah party also lauded the attack. Its Jerusalem branch representatives declared a general strike in solidarity with the terrorist. Businesses across east Jerusalem closed as praise for the terrorist echoed through the streets.

In video footage uploaded to social media on Sunday, Jerusalem Arabs recording the incident could be heard screaming "Allahu akbar," (God is great) as the sounds of shots reverberated across the city.

Israeli security forces detained tens of Palestinians in the wake of the attack, including following clashes that erupted when more than 30 Arabs attempted to publicly memorialize Abu Sbeih.

According to media reports, Abu Sbeih's house had been festooned with Hamas flags while onlookers chanted his praises in Arabic.

As security forces attempted to measure his house in preparation for its demolition in response to the attack, a pipe bomb was thrown, lightly injuring one IDF serviceman.

In a video apparently posted on social media shortly before the attack, Abu Sbeih is shown urging terrorist attacks "to protect Al-Aqsa." It is unknown when he filmed the video, but his Facebook page was rife with hatred for Israel and incitement to violence. The page has since been suspended.

The United States issued a statement condemning the attack "in the strongest possible terms."

Also on Sunday, a firebomb was thrown at a car in the Gush Etzion settlement bloc, lightly injuring a woman.