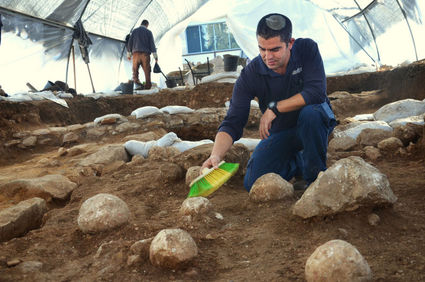 Kfir Arbib, excavation director, cleans one of the sling stones.

(JNS.org)-Archaeologists have discovered evidence the Romans had breached Jerusalem's so-called "Third Wall" at the end of the Second Temple period in 70 C.E., the Israel Antiquities Authority (IAA) announced.

Remains of a tower protruding from the so-called "Third Wall" that surrounded Jerusalem was found along with many ballista and sling stones that the Romans had fired from catapults as Jewish guards defended the wall, the excavation found.

The discovery was made last winter in the Russian Compound in the city center where construction was underway to build the new Bezalel Academy of Arts and Design campus.

"This is a fascinating testimony of the intensive bombardment by the Roman army, led by Titus, on their way to conquering the city and destroying the Second Temple," IAA excavation directors Dr. Rina Avner and Kfir Arbib said. "The bombardment was intended to attack the sentries guarding the wall and provide cover for the Roman forces so they could approach the wall with battering rams and thereby breach the city's defenses."

The first-century Romano-Jewish historian, Josephus, an eyewitness to the war, provided details about the construction of the "Third Wall" that was started by Agrippa I and designed to protect the new quarter of the city called Beit Zeita. It was completed 20 years later by the defenders of Jerusalem to fortify the city against the Great Revolt against Rome.

Josephus detailed how the wall started in Hippicus Tower, now identified with David's Citadel. From there, it continued north to the Psephinus Tower, which defended the northwestern corner of the city wall. Then, the wall turned east toward the Tomb of Queen Helena, which is now identified with the Tombs of the Kings.