No buts about it, local author publishes best-seller 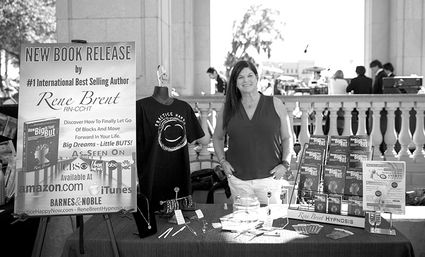 Rene Brent in her booth at the Jewish Pavilion Sunday in the Park event on Oct. 23.

Many of you may know Rene Brent as a dedicated member of the Orlando Jewish Community, who for the past 23 years has volunteered with The Jewish Federation, chaired the women's campaign for three years, and volunteered for the general campaign for two years, all while working as a trauma nurse, a career that spanned 25 years. She is also the mother of three children: Ariel 25, Elise 23 and Ben 19, who made Aliyah in August of this year.

However, many of you may not know that Brent is now a published author. Last weekend she was spotted at the Jewish Pavilion's Sunday in the Park with copies of her signed first book, "How Big is Your But."

The beginning of 'no more buts'

After her divorce, Brent struggled just like many who have gone through divorce.

"I felt at a loss for where my life was going next. The weekend my ex remarried was my birthday. Our three kids were, of course, with him and I was alone.

"I couldn't stay home... alone. I booked a trip to British Columbia, spending my time there on a yoga retreat and, during a hike, I came to a stream with water branching off in two directions.

"I realized I had a choice and this was the beginning of a new journey. I instinctively knew that one day I would write a book and, during the retreat while walking on a treadmill, I also had the answer to what my new path would be-hypnotherapy."

"When I was trying to get pregnant with Ben, I went to spa in Miami and worked with a hypnotherapist-who helped me understand I would never be something I didn't agree with. At that time, I believed I wouldn't be as good a mother to a third child as the other two.

"Once I understood I was holding onto a false belief, I got pregnant-and on that treadmill at the retreat when I envisioned being a hypnotherapist, it reminded me how I was helped and I wanted to help others and move forward in a new way," she shared.

"As I began studying and training, I understood that the pain I was feeling from my divorce was not about my divorce but about childhood wounds. It was as if a huge bandage came off and my wounds were exposed. In the process, I learned how to heal myself as I helped others. As I moved through and did my own healing-my own life expanded."

As people came to see Brent in her practice, she noticed a pattern of resistance.

"All I heard were there BUTS and the idea for my book, 'How Big is Your BUT,' was born."

In her practice she helps people regain control of their emotions.

"When we are out of control, it is as if someone else is driving our car when we wake up. I teach people how to be in the driver's seat."

Brent has a private practice in Maitland, and also services as the director of the Institute of Personal Hypnotherapy.

In addition to her book, Brent is also an international speaker, and has appeared on radio and podcasts and offers group workshops on anxiety and stress reduction.

Her book, which includes chapters on forgiveness, sleep and "cracking the ego code," has useful exercises at the end of each chapter as well as links for two free meditations.

"Hypnotherapy gives you the ability to gain awareness using the science of the body and mind to make significant changes that will move you forward in life. You will learn how to 'practice happy.'"

Brent is already working on her next book, "Oy Vey! I Worry About Worrying!"