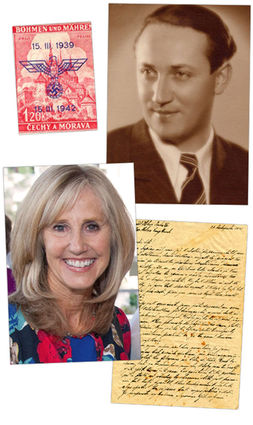 Orlando author Joanie Holzer Schirm, a featured speaker at local forums such as the Downtown Orlando Public Library, the Tenth Annual Dr. Phillips Rotary Club sponsored Author Series at the Southwest Branch Library, the Winter Park Women's Club, and teacher-training sessions and Yom HaShoah at the Holocaust Center Memorial and Education Center of Florida has gained another honor. Her debut nonfiction book, "Adventurers Against Their Will," has been included as an educational resource in the book "Essentials of Holocaust Education: Fundamental Issues and Approaches," by Samuel Totten and Stephen Feinberg. The comprehensive guide helps teachers engage students in the study of the Holocaust that is compelling, thought-provoking, and reflective.

Schirm's book, with stories based on a secret WWII letter collection her Czech-American Jewish father hid away after the war, joins other recommended sources like Elie Wiesel's "Night" and Primo Levi's "Survival in Auschwitz."

Schirm's father, Dr. Oswald Holzer, became a well-known family physician in Melbourne, Florida, after he'd been forced from his country as a displaced person, first taking refuge in China where he fell in love with a beautiful American teacher who would later become Schirm's mother. The book won the 2013 Global Ebook Award for Best Biography.

Schirm, a dedicated community activist, known mostly for her leadership role in World Cup Orlando 1994 and previous owner of an Orlando engineering and environmental company, began writing full-time in 2008 after selling her firm. Two additional manuscripts for her nonfiction series will be published in the next two years.

"Adventurers Against Their Will" has gained recognition as an educational resource for organizations such as the National World War II Museum; United States Holocaust Memorial Museum; Florida Department of Education; International Tracing Service (ITS) in Bad Arolsen, Germany; and the Holocaust Center Memorial and Education Center of Florida. Over 800 copies of an ITS-produced lesson plan in German have been distributed to teachers in Germany and Austria. The booklet, also available on-line, is given out when a traveling exhibit about forcibly displaced persons during WWII travels around Europe bringing a story of relevance to today's ongoing refugee crisis.

During the last school year in the Orlando area, Schirm was a guest speaker in Dr. Phillips High School freshman classrooms of English teacher Nilam Patel of the Center for International Studies Magnet program.

"Mrs. Schirm is fully dedicated to impassioning young people to learn from their past, value it, and continue to grow and learn about themselves because of it. She visited the students as we introduced their 'Genealogy Projects' and shared her adventure in writing, researching, and communicating with a network of family, friends, and experts to paint a mosaic of incredible stories tied together by documented evidence and first-hand interviews," Patel stated.

Schirm often participates locally with area book clubs providing background stories to her journey of discovery for the nonfiction series she's writing. To a long-standing book club in the Dr. Phillips area at the home of Fran McGowan, Schirm brought the pants her father wore in 1939 when he escaped from the Nazis who were holding his Czechoslovak Army unit under guard after the Germans occupied his homeland.  McGowan described the experience: "Your genuineness in sharing and all the visuals you presented added an extra layer of understanding to the complexities and realities of the 'Adventurers' lives. The ladies will be talking about this for a long, long time."

"I know my father, whose letter collection was discovered after his death, would be proud that their thought-provoking and engaging words can help students and readers better understand the past and the present," said Schirm. "Hopefully, this awareness will inspire us all to care enough to take action, stand up for human rights and dignity, because creating a peaceful and respectful world takes diligent hard work."