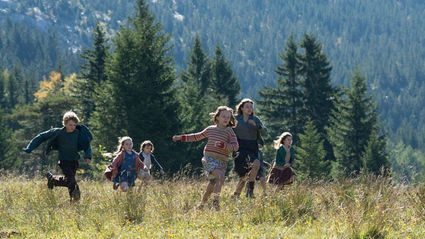 The Roth Family JCC's annual Jewish Film Festival, presented in partnership with the Enzian Theater, is showing five films and one short Nov. 12 through Nov. 14. The first film, "Fanny's Journey," will be shown at the Orlando Science Center, 777 E. Princeton St., on Saturday evening at 7:30 p.m. The rest of the films will be shown at the Enzian, located at 1300 S. Orlando Ave., Maitland.

This year, The Roth Family JCC is offering "Saturday Night Out" at a discounted price for parents who will be attending the film festival opening. Children ages 18 months to grade 5 can have fun at the J from 5:30 p.m.-10:30 p.m. while parents enjoy the movie. When purchasing tickets to "Fanny's Journey" show receipt at the JCC's Registration Desk or forward it to register@orlandojcc.org for a rebate up to $23 for Saturday Night Out.

Tickets to shows can be purchased at the Enzian or on its website http://www.enzian.org For those who would like to see all five films, purchase a Mensch Pass with preferred seating for $75; Series Pass with second priority seating for $50; Individual tickets for $11 and group rates of 20 or more ($1 discount on individual tickets) available on Enzian's website or in person at The Roth Family JCC.

And now for the reviews!

Filmed in France and directed by Lola Doillon; In French with English subtitles.

The Holocaust was terrifying for adults. But what about children left to find their own way? This film, based on a true story, is hold-your-breath, cover-your-eyes suspense as nine children, led by 13-year-old Fanny, travel through France and Italy evading Nazis to get to the safe haven of Switzerland. May I remind you, these are children who play house, frolic in the water, and long for their mommies. And like any children traveling, they complain-"I'm hungry. I'm thirsty. My feet hurt. When will we get there?" "Fanny's Journey" is a truly inspirational movie.

"In Search" was filmed in the U.S. and Israel, directed by Roger Sherman; English.

Food is the expression of the people and culture of a country. It is tradition handed down from generation to generation. So, just what is "Israeli cuisine"? Michael Solomonov, James Beard award-winning chef/owner of Zahav Restaurant in Philadelphia, talks with chefs of all backgrounds throughout Israel looking for that answer. The cuisine of Israel is as diverse as the people and the cultures: Ashkenazi, Sephardic, Palestinian, French, Turkish, Moroccan... and on and on. One Jewish chef in Ein Rafa, an Arab village, was asked what food was served in her restaurant. Her reply, "I don't know. Let's roll. This is me."

One thing all these different types of "Israeli cuisine" have in common: All the chefs use the produce of the land in the regions where they live, so that whatever culture the dish is from, it is pure Israeli.

Enjoy breath-taking views of the land and the food as you are reminded that food brings people together; it brings us home; it is a treasured tradition for everyone, and is ever-changing while staying the same. Anyone want some Tabbouleh?

Five minutes long, "Bagels in the Blood" was filmed in the U.S. and Canada and directed by Jonathan Keijser and Daniel Beres; in English.

Good title. It fits. This isn't a "how it started" documentary of a family-owned bagel bakery. It is a "why we make bagels" story told by Irwin Shlafman, the grandson of a Russian bagel baker who immigrated to Montreal, Canada, and opened the famous Fairmount Bagel shop. You can almost smell the freshly baked bagels.

Filmed in the Netherlands and directed by Job Gosschalk; in Dutch with English subtitles.

If this movie was called by another name, you would have known the ending at the beginning. But that is the joy of this refreshing, "Neil Simonish" film. It is about relationships-family relationships, friendship relationships, daughter and father relationships, romantic relationships, and did I say family? One thing that was interesting: In the midst of singing a song, which is in Hebrew, Moos is asked "what language is that?" and she answers, "Israeli." And remember, taking care of others and always being there does have its benefits.

Filmed in Canada, Germany, U.S. and Israel; directed by Alon Schwarz and Shaul Schwarz; in English and Hebrew with English subtitles. 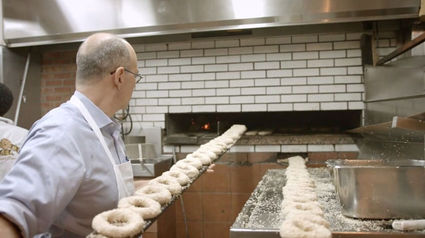 'Bagels in the Blood'

Here are family relationships from a different angle-a tough one. Discovering your mom and dad aren't your mom and dad is hard enough. Then learning you have a brother, too, and it is 65 years later is almost heartbreaking. This is the story of Izak and his brother Shep and their reunion with their mother after 70 years.

Filmed in Israel, directed by Emil Ben Shimon; in Hebrew with English subtitles.

Never underestimate the power of a group of women! When the women's balcony collapses in an Orthodox synagogue an interloper tries to run the congregation and almost runs off all the women when he wants to use money the women have raised to repair the balcony for a new Bible scroll. Husbands and wives are pitted against one another, friendships are momentarily torn apart. It is a poignant portrait of a modern Orthodox community in Israel embroiled with all the stains of humanity.