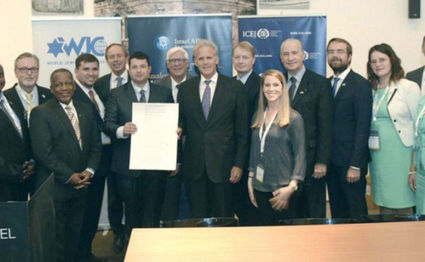 (JNS.org)-Lawmakers from 17 countries signed a declaration last Thursday against the United Nations Educational, Scientific and Cultural Organization (UNESCO) resolution and called for international recognition of Jerusalem as the undivided and eternal capital of Israel.

The UNESCO resolution rejected any Jewish link to the Temple Mount and the Western Wall in Jerusalem.

In the declaration, 19 MPs representing the 17 countries, said that "the U.N. resolution is disconnected from reality and is incorrect. We will work toward the international recognition of Jerusalem, as the undivided, eternal capital of the state of Israel."

The parliamentarians presented the declaration to Deputy Minister Michael Oren, who delivered it to Prime Minister Benjamin Netanyahu.

Oren called the UNESCO resolution "unacceptable." He said it "must be fought in every way possible. The signing of the declaration by MPs from all over the world against UNESCO is one of the steps we will take against this atrocious decision. We will continue to emphasize the eternal connection between the Jewish people and our eternal capital forever and ever, which nobody in the world, and certainly not UNESCO, can break."

They were in Israel for the 5th Israel Allies Foundation Jerusalem Chairman's Conference, sponsored by the World Jewish Congress and the International Christian Embassy Jerusalem. The event was held at the Mamilla Hotel in Jerusalem.