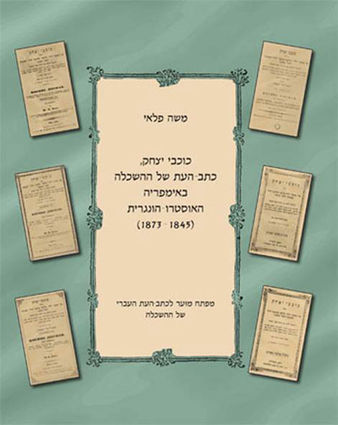 Prof. Pelli's newest book, 'Kochvei Yitzhak, The Journal of the Haskalah in the Austro-Hungarian Empire (1845–1873)'

The book is titled Kochvei Yitzhak, The Journal of the Haskalah in the Austro-Hungarian Empire (1845–1873). It is a monograph and an annotated, computerized index to the periodical that has been published for an extended period of 28 years, in 37 issues.

This is the sixth book in the series of monographs and annotated indices on the periodicals of the Hebrew Haskalah [Enlightenment] in the 18th and 19th centuries. It is published in Hebrew, as is the language of the journal, with an English abstract, an extensive bibliography, and supplementary data about that periodical.

This 620-page book deals with many aspects of Kochvei Yitzhak, covering the literary, scholarly and timely articles published in that periodical. It discusses and analyzes the writings of various authors who contributed to the journal, and addressed major issues of the times confronting the Jewish communities in Europe. These authors, poets, creative writers, scholars, teachers and progressive rabbis, promoted the ideology of the Haskalah. They advocated improving and modernizing Jewish education, fostering the ideals of humanism, openness to the European culture, and advocating to refine Judaism and its practices. They aspired to improve the social and cultural condition of the Jews by introducing the study of the sciences, modern languages, and modern disciplines into the curriculum in order to enable young Jews to acquire a practical profession.

The Indices to the journal Kochvei Yitzhak published in this book were created by a computer program prepared especially for this project. They are cross-referenced, annotated, alphabetized, and author-and-subject listed. They cover all articles, essays, creative writings, and scholarly studies on a variety of topics in Jewish and Hebrew Studies, such as Biblical commentaries, and learned studies on the Hebrew language, Jewish history, and Jewish education. They also cite newly discovered medieval Hebrew manuscripts as well as their critique and studies of their authors. Also included are various genres in belles lettres: poems, stories, satires, epigrams, biographies, dialogues, and timely articles about current events in Jewish society in the Austro-Hungarian Empire.

Annotations were added to most entries, highlighting major ideas and topics discussed in each entry, and identifying authors, deciphering initials, and providing cross‑references and some bibliographical data of cited and reviewed books. In addition, the notes update bibliographical information on related subjects in modern scholarship.

The journal's editorial goal, as stated on the title page, was to encourage creative writing in Hebrew, and to develop an interest in the Hebrew language and its literature among its readers. It also promoted the ideas and ideals of Haskalah in the context of the surrounding cultures, the modernization of Judaism, and rejection of superstitious beliefs and practices.

For some thirty year (1845 to 1873), Kochvei Yitzhak became the mouthpiece of Haskalah, addressing the literary and Haskalah needs of writers and readers in the Austro-Hungarian Empire and beyond, including Galicia. Several topics and issues, which were highlighted in the journal, became of prime importance to the Haskalah at that time and represented its ideology and goals.