By Joyce Eisenberg and Ellen Scolnic 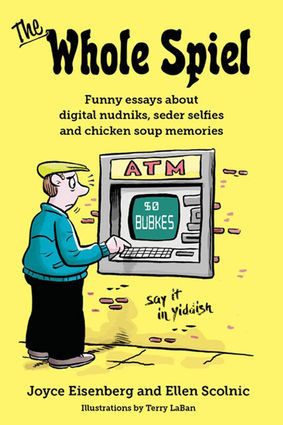 This collection of 34 stories takes a heartfelt look at modern life through a Jewish lens. In the essays you can read about the great shnecken vs. rugelach battle, the newly discovered Jewish summer holiday of Simchat Squash, and why yesterday's nebbish is today's millionaire tech nerd.

Joyce Eisenberg and Ellen Scolnic are the authors of "The Whole Spiel: Funny essays about digital nudniks, seder selfies and chicken soup memories," from which this excerpt is taken.

When you want another piece of that delicious noodle pudding, do you ask for kugel (COO-gul) or kigel (KEE-gul)? How you pronounce it is a clue to where your ancestors came from. Galitzianers called it kigel and preferred it sweet. They came from southeastern Poland and the western Ukraine, which included the cities of Chelm and Krakow. Litvaks called it kugel and preferred it savory. They came from Lithuania, northern Poland and northern Russia, which included Vilna, Minsk and Kiev.

Historically, these two groups of Ashkenazic Jews feuded over which one was smarter and higher class, but these distinctions are long gone. Today Jewish battle lines are more likely drawn over which sleep away camp your kids attend or which Chinese restaurant you call for Sunday night takeout.

But in South Africa, calling out "kugel" can still cause you trouble. That's because it's a derogatory term for a Jewish woman who is materialistic and pretentious. Why label someone a kugel? Because a kugel is a plain pudding that masquerades as a delicacy. Maybe this explains why when you search online for kugel, among all the photos of noodles, apples and cinnamon deliciousness you come across a photo of a sexy woman with the unfortunate name of Olivia Kugel.

Before a kugel was a kugel, it was a dumpling that was formed from a batter of bread and eggs and simmered in stew; later on, chefs would cook the dumpling in a kugeltopf. (In German kugel means ball; topf is a round earthenware jar.) On Friday afternoons, a Jewish woman would tuck her kugeltopf into her pot of cholent, a stew of meat, beans and potatoes, and shlep it to the village bakery so it could be placed in a bread oven that was still warm from baking loaves of challah. When the woman picked up her stew at the end of Shabbat, the steamy oven would have turned the dumpling into a pudding.

As time went on, cooks substituted noodles for the bread batter. Traditional Shabbat kugels were served as a side dish to a meat entrée and had to be dairy free to conform to kashrut. These savory kugels were usually bound together with eggs and oil; onions sautéed in shmaltz were added for flavor. Polish cooks get credit for "inventing" sweet dairy kugels by adding raisins, cinnamon and farmer's cheese; these were a perfect accompaniment for a dairy brunch or lunch. The Ottomans brought rice kugels to Eastern Europe. And in the shtetl, where potatoes were eaten several times a day, potato kugel was a treat.

Some 80 years earlier, when Hasidic Jews began moving from Eastern Europe to Jerusalem, they took their unique sweet and savory kugel recipe with them: It called for very thin noodles combined with eggs, caramelized sugar and lots of freshly ground pepper. The kugel, which was baked in a loaf or tube pan and cut like a cake, became known as Kugel Yerushalmi, or Jerusalem Kugel.

In the last 150 years, kugels have traveled from Vilna to the East Village. Designer three-layer kugels include sweet potatoes, broccoli and cauliflower, or goat cheese, duck eggs and sour cherries. Instead of challah crumbs, chefs spread kosher Japanese panko on top. Kugels have broken out of square and rectangular molds; they are being baked in cookie cutters and in tiny Bundt pans.

If we served a sour cherry kugel baked in a tiny Bundt pan, there would be an uprising. Every family has its favorite kugel variation-and that's the best one. One camp likes its kugel savory with the thinnest of noodles, cottage cheese, cream cheese and a little vanilla. No fruit, no pineapple chunks, no strange foreign objects. Another contingent likes its kugel sweet with brown sugar, raisins and extra wide egg noodles.

No matter what they look like, kugels are one of the most ubiquitous Jewish comfort foods. They are on the table at holiday dinners and charity luncheons. We know people who wrap kugel in aluminum foil and shlep it to summer camp on visiting day at their children's request.

Kugels have found favor beyond the Jewish community. African-American chef Mildred Council owns Mama Dip's, a soul food restaurant in Chapel Hill, North Carolina. Her menu includes smothered pork chops, chitlins and kugel. After she was introduced to kugel at an interfaith community dinner, she created her own versions. One has dried cranberries in it; she serves it at Christmastime with cranberry sauce on top.

Farther afield, you can find the Lithuanian kugelis, a hot, crusty kugel that includes potatoes, eggs, onions, milk and-gasp!-bacon. A version of this migrated to Switzerland where what they call kugel comes with herring on top. 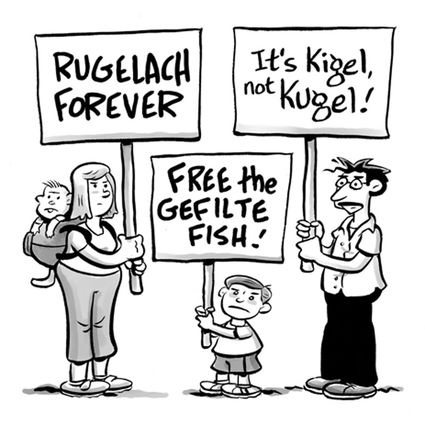 Kugel expert Allan Nadler, a professor of Jewish Studies at Drew University, wants none of it. "No spinach or zucchini or sweet kugel for me," said Nadler, who grew up in Montreal. "Everything is a kugel these days. I grew up in a home where my grandparents were from Russia. We ate salt and pepper kugel and cut it up in the soup. Now that's kugel!"

Joyce Eisenberg was a longtime editor at the Jewish Exponent and Ellen Scolnic was a frequent contributor. They teamed up in 2006 and wrote the "Dictionary of Jewish Words" (Jewish Publication Society 2006) a best-seller for the Jewish Publication Society, and just released "The Whole Spiel: Funny Essays About Digital Nudniks, Seder Selfies and Chicken Soup Memories" (Incompra Press 2016). Ellen and Joyce, The Word Mavens, speak, write and tweet about all things Jewish. Visit their website, TheWordMavens.com.