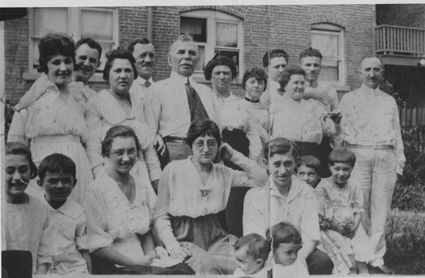 Widower Uncle Leo Lerner (with large tie) proudly stands among his wife's family on a visit to Cleveland in 1919. Thanks to his efforts, the Schwartzman family was able to immigrate to the U.S. between 1906 and 1910. The author's father, Jacob Moses Schwartzman, is third from the right in the back row.

For those interested in their family history, the "My Jewish Roots" series of 10 monthly hands-on genealogy workshops is being held by the Jewish Genealogy Society of Greater Orlando (JGSGO). These workshops are being co-hosted by The Roth Family JCC, Rosen JCC, UCF Hillel, Congregation Ohev Shalom, and Temple Israel in rotation at their facilities and also joinable over the Internet. The December Workshop topic is "Conduct USA based Research."

The following is one of my stories of finding family through genealogy research.

Ten years ago, it was very sad when family left us in Indiana to relocate to Florida. I realized I needed to fill any empty hours in my schedule till my retirement (2010), when my husband and I could join them. Sitting down at the computer, in just 5 minutes on the Ellis Island website I was able to bring up my father's arrival in America. I knew he had walked over 1200 miles from his home in Bendery, in what was then called Bessarabia, across Europe to the Northern port of Bremen in Germany. This was in 1906, after the terrible pogrom in nearby Odessa the prior year. A young man of 18, Jacob Moses Schwartzman travelled alone, leaving behind his widowed mother and five sisters. He stayed in "safe houses" across Ukraine, Poland and Germany on an early version of the Jewish "Underground Railroad." To my surprise, the ship manifest showed that his passage was paid by "Uncle Leo Lerner" of Rivington Street in New York City. An immediate Google search revealed that Uncle Leo, a lawyer, had founded the Federation of Bessarabian Jews in America. Its primary purpose was to establish an orphanage for the young homeless Jewish orphan boys then roaming the streets of New York City's Lower East Side. The concern was that the boys would lose their Jewish identity without some form of rescue. Starting with 50 boys in 1914, the Hebrew National Orphan Home's (HNOH) census grew to 300 by 1920. I was able to establish that Leo's wife, Rose Schwartz Lerner, was my father's aunt. Obtaining her death certificate from New York City, I learned my father was named after her father, also named Jacob Schwartzman, and that Aunt Rose died unexpectedly in 1907 at the age of 47. Yet, by 1910, her husband helped my father bring his mother and three of his sisters to America.

I was delighted to find an HNOH website maintained by alumni. There was a contact email on the website, so I wrote telling them how their founder had made it possible for my father, his wife's nephew, to come to America. HNOH kindly sent me information about Leo Lerner from their archives, and I sent information I had begun to gather. A family picture dating to about 1919 has the notation "Uncle Leo," but none of my Schwartzman descended cousins whose mothers/grandmothers and great grandmother are in the picture knew anything about "Uncle Leo" and the orphanage. Finally, I was able to share with them that Uncle Leo was the benefactor who made it possible for their antecedents to come to America.

Not the end of the story! Several years passed and in 2009 the orphanage forwarded to me this email received from a lawyer in Israel with experience as a genealogist: "I was requested by the Administrator General of the State of Israel to trace the heirs of Katherine Lerner. Katherine owned property in Israel (and still does). According to Israeli law, since she was "missing" from Israel and the property was considered abandoned, the State of Israel holds it for the rightful owners. My task is to trace Katherine Lerner's descendants. The next step will be to do the procedures required to give the property to the rightful heirs. It would be great if you can provide me with the family tree and contact information with Katherine's family."

Wow! "Orphaned" land in Israel! By this time, I knew that Katherine Lerner (Kitty) was one of five daughters of my father's Aunt Rose and her husband, Uncle Leo Lerner. Kitty married later than her sisters and never had children. However, I knew from the Schwartzman/Lerner Family Tree I had assembled that there were at least a dozen grand nieces and nephews. I met some of them in 2007 at a Lerner Family Reunion. The get-together had been called to reveal my research on their great-grandfather, whom none had ever met or even knew about, as he had remarried and moved from New York to California in 1923.

We learned from the Israeli Ministry that Kitty, while still single, had traveled to Israel around 1928. She purchased a plot of land in Migdal, on the Western coast of the Sea of Galilee. Decades later, married and with no children, Kitty apparently forgot about the property when she drew up her will. The State of Israel was ready to turn it over to her heirs-but first, many hoops had to be jumped by the 17 living heirs, working together, from finding the death certificate, Will, providing proof of relationship, etc. The bureaucratic requests from Israel got more involved, till last year-6 years later-a representative for the family wrote to the Israeli Ministry of Justice that the "heirs" had "determined that to make any further effort to have the property released to us would require more effort than it is worth. Consequently, we will make no further claim upon the property. Please feel free to dispose of it as you will."

In the end, it was disappointing for all these Lerner cousins. But that fortuitous revelation from the Ellis Island records, had brought 17 cousins together. Hopefully, knowing the State of Israel would benefit was a consolation to some.

The Jewish Genealogical Society of Greater Orlando's (JGSGO) next workshop, "Conduct USA based Research," will be held Tuesday, Dec. 6 from 7 till 9 p.m. at The Roth Family JCC. The workshop is free and open to the public. Bring your own laptop to participate in the lab portion. It is also possible to attend via the Internet. Pre-registration is required. Pre-register for either in-person or online participation at http://www.jgsgo.org/MyJewishRoots.