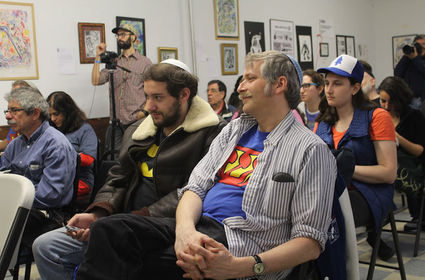 NEW YORK (JTA)-After Brett Parker's great-grandfather fled the pogroms in Europe and came to the United States, he opened a drug store where he sold comic books.

Each week he would give his grandson, Parker's father, five comic books to take home. Growing up during the early years of Superman instilled in Parker's dad a lifelong love of comics, many of them written by Jews, that he passed on to his son.

"Imagine if he kept them," Parker said laughing, picturing the first editions of Superman that would now fetch high prices. But as a kid, Parker preferred another superhero, also created by Jews: Batman.

"And more than that, it was all about 'tikkun olam' for him," he added, referring to the Jewish imperative to repair the world.

Parker and his son Bayard, 9, were two of the 140 or so attendees at the first Jewish Comic Con, a comics convention hosted in a small synagogue in Brooklyn. The gathering-mostly adults with some children-gave Jewish artists a space to show their work, talk shop, delve into the historical connection between Jews and comics, and analyze Jewish characters from the vast universe of comic books.

The major Comic Cons in San Diego and New York draw well over 100,000 people each and are held in vast convention centers with broad atriums filled with stands and super-fans in costume. They are destinations for actors, Hollywood types and geeks alike who want to spend a few days with their ilk.

Sunday's convention was a much more intimate, low-key and, well, Jewish affair. It opened with Shacharit, the morning prayer service, and broke in the middle of the day for an afternoon prayer. Two rows of tables in the synagogue sanctuary were set up in front of wooden pews that had been pushed to the wall, while guests in kippahs, ritual fringes or long skirts perused comic books retelling liturgy, Holocaust stories, Jewish history or biblical tales.

The convention had little of the involved costumery that colors the larger Comic Cons, but attendees wore Batman, Superman or Marvel Comics shirts, and a kid in a Spider-Man costume played by the Torah ark.

Some of Kirby, Lee and Kane's followers at the convention-both artists and enthusiasts-said the Jewish role in creating the comic book industry sparked their interest in the field. Julian Voloj, who is writing a graphic novel about one of the creators of Superman, Joe Shuster, said Jewish immigrants could relate to how Superman balanced two competing identities.

"What made Superman appealing was that he was, to use a Yiddish term, a 'gornisht,'" said Voloj, using a word meaning "nothing." "But in reality he was a superhero. In a way it's a metaphor for the immigrant experience. You're one thing, and you're seen by people as one thing, but in reality, you're so much more."

At the event, Voloj sold his graphic novel, "Ghetto Brother," about a Bronx gang leader turned activist with Jewish roots. Jewish historian Rafael Medoff and comics historian Craig Yoe sold an anthology of political cartoons from the 1940s called "Cartoonists against the Holocaust." Isaac Goodhart, 29, hawked his comic, Postal, about a detective working in a town full of criminals, where he includes Hebrew writing and Jewish themes. Jordan Gorfinkel, who worked as part of the management team of the Batman comics, displayed samples of his weekly comic strip "Everything's Relative," which appears in The New York Jewish Week.

Gorfinkel moved around a lot as a kid and said he found his "best friends" in superheroes who acted as role models he could always trust. He now runs a workshop at Jewish schools and camps, where he teaches children the rudiments of comic art and has them reimagine a story from the Bible through drawing.

He is working on a graphic-novel version of the Passover Haggadah complete with traditional text. Gorfinkel says it will engage kids through dynamic art in a way a traditional seder cannot.

"Kids, and adults that are kids at heart, need to connect to our Jewish texts in entertaining ways," he said. "When you're sitting around the seder table with a book, what's the most logical way to bring the story to life? Using a modern medium that also happens to be one Jews created."

Like many Jewish conventions, this one couldn't help getting snarled in the thorniest of Jewish debates. At a panel on Jewish characters in comics, the discussion opened by asking who, exactly, counts as a Jewish character.

"If you have one [Jewish] parent and identify as Jewish, you have a lot of characters, including the third Robin," shouted someone in the audience, referring to Batman's sidekick.

The man was seated, along with a few others, on a repurposed synagogue pew, while most of the audience of several dozen people sat on folding chairs. On the walls, presenters at the conference advertised comic art for auction, with the proceeds going to the synagogue, Congregation Kol Israel. One panel had a drawing of the Star Wars villain Darth Vader saying the Hebrew word for "repentance."

While Sunday's gathering was a far cry from the largest comic cons, in a certain sense, said artist Dean Haspiel, it was the most appropriate feel for the genre. While Marvel and DC Comics films are booming, he said, comic book artists-like Jews-remain a small community invested in its tradition.

"Even though comic books have become popular in movies and costumes, the actual comic book is becoming like a rare breed," Haspiel said. "What I admire about the Jewish people that were here, they have each other's backs through thick and thin, and that's the same way we feel as cartoonists."