Book review: 'The trombone man: tales of a misogynist' 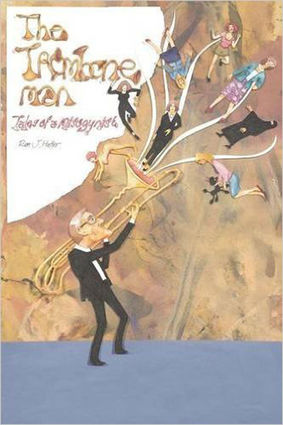 Ron J. Hutter has written a provocative, entertaining, and thoughtful novel that explores the problem of anti-Semitism in a very original way. In "The trombone man: tales of a misogynist," he uses misogyny both as a protest about the treatment of women in various parts of the world and as a metaphor for what the late scholar Robert Wistrich called "the longest hatred," anti-Semitism.

Based on some actual events, "The trombone man" takes aim at populism, political correctness and hypocritical expediency. Near the beginning, the book suggests the theme of dishonesty by mentioning master art fraud Hans van Meegeren, who duped enthusiastic art lovers and experts. This sets the tone for Hutter's narrative whereby outrageous and deceitful values are embraced by an adoring, mindless public.

In other words, be ready for a racy ride through a world that is simply upside-down.

The story involves trombone loving anti–hero Dr. Peter Kraus, a behavioral scientist, known for his quirky, innovative ideas, who is also charming, courteous and erudite. While women adore him, most of his dates end in disaster, especially with his on-and-off girlfriend, Bev. Following a particularly bad date, Peter consults his psychoanalyst, Dr. Maxine Feinschmecker, who reveals that despite Peter's being a romantic, considerate and sensuous lover, he is a misogynist.

Stunned, yet never one to give up, Peter forms a "misogyny movement," publicly presented as a "new addition to the multicultural landscape." To his astonishment, the movement spreads like wildfire all over the world. Peter becomes an international celebrity. He embarks on an anything-goes venture in a world that seems entirely inside out.

Peter's ventures are not all plain sailing. Indeed, after a hilarious European tour with Bev, promoting misogyny, Peter confronts the quiet and unassuming Dr. Sue Goldberg, a feminist, at a public university debate during "Anti-feminism Week," an event clearly reminiscent of "Israeli-Apartheid Week" on campuses. With Dr. Goldberg, the charismatic Peter more than meets his match. The debate is gripping, illustrating with a sarcastic lens both mindless enthusiastic populism and political correctness, both of which are very topical at the moment in the western world, particularly on campuses.

This compelling story is unusual, sophisticated and in parts very funny, yet never loses sight of its dark message that is relevant to our times. Hutter's biting and provocative perspective is entertaining and a good read with plenty to think about.

After reading the book, I spoke to Hutter, who told me that while there are many excellent books on feminism and anti-Semitism by great scholars (such as Wistrich above), he believes we can supplement them by satirizing "the longest hatred"-in so doing making the unpleasant phenomenon accessible to more people who would otherwise not read academic books.

"The trombone man: tales of a misogynist," by Ron J.Hutter, is available through Amazon, Barnes & Noble, Lulu and other outlets.