Comedian Nick Kroll is serious about being funny 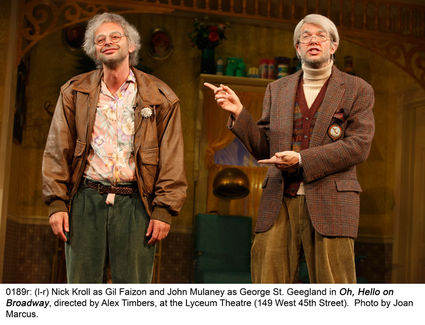 NEW YORK (JTA)-Nick Kroll is serious, which is a tad unusual for a man who has largely made his living by being funny.

But being funny for reporters isn't his job, he tells JTA in a telephone interview.

"My job is just to answer your questions," Kroll said. "Trying to be funny is tricky. You end up saying things that look different in print. My goal is to produce content that's funny, not be funny in interviews."

Kroll, of course, has been creating funny content for a dozen years, most famously on the "Kroll Show," his sketch comedy series that ran on Comedy Central from 2013 to 2015.

And lately Kroll, 38, seems to be on every movie screen in the free world, from a co-starring role in the romantic comedy "My Blind Brother," which featured his first onscreen love scenes, to a voiceover gig in the animated feature "Sausage Party."

He also has a key part in the historical drama "Loving" (out Nov. 4), which already is the subject of awards chatter. In the film-about the real-life interracial couple Richard and Mildred Loving, who were arrested in 1958 because their marriage violated Virginia's anti-miscegenation laws-Kroll portrays attorney Bernie Cohen, who in 1967 successfully argued before the U.S. Supreme Court that the state's ban on interracial marriage was unconstitutional.

At the moment, however, he's busy promoting "Oh, Hello on Broadway," a play he wrote with John Mulaney. The pair met "at a very Jewish school, Georgetown," where they joined an improv group, became friends "and we kept hanging out and making things," he said.

One of the things they "kept making" were two characters: Gil Faizon (Kroll) and George St. Geegland (Mulaney), a couple of alter kockers who share an apartment on Manhattan's Upper West Side and have somehow kvetched their way to the Great White Way.

"These are characters with very specific to New York personalities," Kroll said. It wasn't his Jewish grandfather that motivated him to create Gil; rather, he and Mulaney were supposedly inspired by "two old men [we saw] going into the Strand book store, each buying copies of Alan Alda's biography," he said. The pair then moved to a park to read their individual copies.

"They became an inspiration or a focal point, a kind of person John and I were both interested in," he said.

Before winding up at the Lyceum Theater ("where great playwrights put up their work-Tennessee Williams and his sister, Serena," Mulaney quips in the production), they toured the country with "Oh, Hello" and then had a successful run off-Broadway, all to rapturous reviews.

That's continued with this production, including a rave from Ben Brantley in The New York Times with a small, off-handed warning about bad puns and politically incorrect jokes.

"Consider that a trigger warning, if you must," he wrote, "but I find it hard to imagine anyone's taking offense."

Clearly, Brantley lacks imagination. There are several Jewish references, but one in particular raises eyebrows-when Gil recalls that his father once said that he "ratted out other Jews during the Holocaust."

The comment drew some titters at a recent performance, but not nearly the quantity or quality of laughs most of the show received.

Kroll says he understands why someone might get upset.

"The character I'm playing is kind of a weasel," he explained. "Even though it's an awful thing to talk about, if you're looking at a character, perhaps his father was the type of person who would have done that.

"He's not celebrated for what he did. But for our show to be able to say the things that we say, every group has to be provoked a bit. Everyone has to take a lump."

Still, it's somewhat surprising, considering that Kroll, who attended Solomon Schechter through grade school, was raised in a Conservative, kosher-keeping Jewish household in suburban Westchester County, New York. His parents-father Jules is the founder of Kroll, a corporate investigations and risk consulting firm, and mother Lynn-have served high-profile roles within the organized Jewish community, including positions on the board of UJA Federation of New York.

For Kroll, that sense of Jewishness, if not level of observance, has stayed with him.

"Judaism can play out in a number of ways: religious beliefs, desire for ritual, even the underlying rhythms of conversation," he said. "That's what makes Jewish history and culture so interesting. So I think for sure, my Judaism plays a huge role in my identity."

It can even serve as inspiration. Kroll, along with Jules Shell and Roger Bennett, collaborated on the 2005 book "Bar Mitzvah Disco," an essay and photo collection that celebrates the kitschy simcha scene of the 1970s and '80s.

Today, Kroll's Jewish identity manifests itself psychologically as well as physically-his look can be a selling point on casting calls "if they need a Jewish guy," he said.

"I find those are some of the more easy casting opportunities. On the other hand, there is no shortage of Yiddishe punims trying to do the same thing," Kroll said.

"But I've also enjoyed playing different characters. Because through styling and makeup, you can transform yourself into another person."

On that subject, many of the interviews done by Mulaney and Kroll have been in their "Oh, Hello" characters. So I ask Nick if Gil Faizon is around and can come out to talk to me.

The answer is a definitive no.

"Gil is only around when George is," Kroll said. "We come as a duo, so I'm not entirely comfortable as Gil without him. It's easier for Nick to talk."

Easier? Perhaps. Funnier? No. For that, head to Broadway.