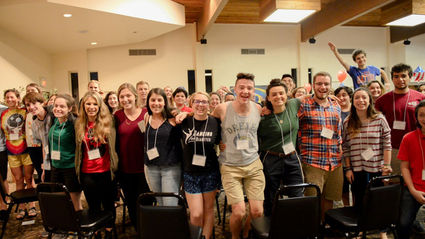 JTENs cast their votes on election eve and they learned about the election process.

More than 40 Central Florida teens, 16 educators and youth directors, and five Jewish community leaders gathered at Congregation of Reform Judaism on election eve for "Decision 2016: Your Voice, Your Vote, Making a Difference."

The program's goal was to help teens discover that their voices matter and they deserve to be heard, even if the students were too young to vote in this year's presidential election.

The event, which was open to all local students in grades 8 to 12, was sponsored by the Jewish Teen Education Network (JTEN), a program of the Jewish Federation of Greater Orlando.

The evening kicked off with teens from all synagogues and BBYO getting to know one another through ice-breakers, facilitated by Lory Conte (BBYO), Lauren Oback (Congregation of Reform Judaism) and Gabe Grossman (Congregation Ohev Shalom).

Rabbi Joshua Neely (Temple Israel) helped the teens explore both sides of key political issues in an Issues Scavenger Hunt, where participants examined the meanings behind political slogans. Finally, teens cast their votes for president of the United States. Hillary Clinton was the overwhelming choice, with 33 votes; Donald Trump received 6 votes; Gary Johnson and Jill Stein received one vote each; and there were two write-ins (including one for President Obama).

Amy Geboff, of Congregation Ohev Shalom, wrapped up the evening with an inspiring message reminding students that they can start making a difference immediately.

Like the students' presidential vote, a post-event survey conducted by Federation resulted in a landslide: More than 85 percent of the teens who responded said that they feel more engaged in the political process and gained a better understanding of all sides of U.S. political issues after attending the program.

"I know a lot more about each of the candidates and what is going on around me at this time, even if I can't vote directly myself," wrote Hannah Neely on her evaluation form.

You can read more about Federation's JTEN program at http://www.jfgo.org/jten.