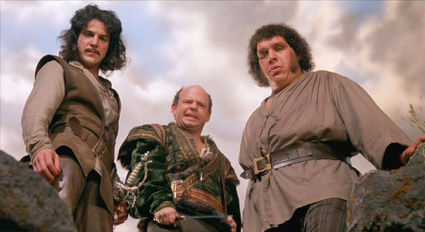 A scene from the movie 'The Princess Bride.'

When author William Goldman was headed off on a business trip, he promised his two young daughters he would write a story for them. "What should it be about?" he asked them. "A princess!" said one. "A bride!" said the other. So, in 1973, Goldman published "The Princess Bride."

The first 20 pages had come easily, but then got stuck. Finally, he had the idea of making the novel a "best parts" abridgment of a fictitious older work by the fictitious "S. Morgenstern," a novelist from the equally fictitious country of Florin.

No sooner had the book been published than buzz began in Hollywood about making a film version. Four years earlier, Goldman had won an Academy Award for his screenplay for "Butch Cassidy and the Sundance Kid." But "The Princess Bride" seemed to defy categories. Was it a comedy? A drama? A romance? A fantasy? A children's story?

Finally, Rob Reiner took on the project. The film was released in 1987, to mostly positive reviews and modest box office success. As the years passed, and the new technologies of VHS and then DVD came into play, "The Princess Bride" found new life and broad, cross-generational appeal. By its 25th anniversary, the film had been deemed one of the best and most beloved in the annals of American movie-making.

From William Goldman (the real author) to S. Morgenstern (the invented author) to the director, the producer, and much of the cast, there was a distinctly Jewish flavor to the project. The most obvious is Billy Crystal and Carol Kane as Miracle Max and his wife, Valerie. Even in the novel, Goldman deliciously recounts that Morgenstern's publishers worried that Max and Valerie were "too Jewish." But beneath such Yiddish-theater shtick, "The Princess Bride" has a Jewish soul.

"Inconceivable!" you say? Then that word doesn't mean what you think it means.

"I don't think anyone involved in the book or the film made the conscious choice to inject Jewish values into 'The Princess Bride,'" observed Rabbi David Kay of Congregation Ohev Shalom in Maitland. "Yet, there are universal concepts and lessons which are presented from a distinctly Jewish perspective."

What's more, Rabbi Kay continues, both the book and the film reveal additional dimensions when viewed through a Jewish lens. "You'd be surprised to learn just how extensive the Jewish connections are in the cast," he said. "It's almost as rewarding as finding the six-fingered man."

For those who love "The Princess Bride"-and for those who aren't familiar with all the references to it in this article-check out Rabbi Kay's four-week class, 'As You Wish'-The Torah of The Princess Bride. The class will meet on four successive Monday nights at 7 p.m., beginning Nov. 28, at Ohev Shalom, 613 Concourse Parkway South in Maitland. The class is open to the public at no charge; RSVPs are requested, but not required. Call 407-298-4650 to RSVP or for more information.