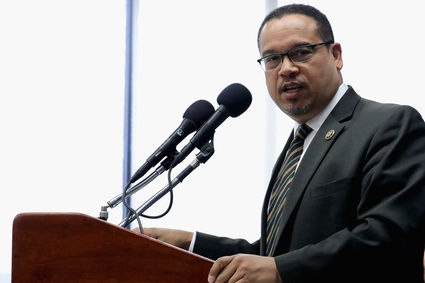 WASHINGTON (JTA)-The most shocking thing about talk of Keith Ellison's Israel record as he rises within the Democratic Party is how few think it's shocking.

Rep. Ellison, D-Minn., is a leading contender for the chairmanship of the Democratic National Committee, despite a record of tough criticism of Israel that pro-Israel insiders say would easily have disqualified him a decade ago.

That he is being seriously considered now-and with the backing of the party's foremost pro-Israel stalwart, incoming Senate minority leader Sen. Chuck Schumer, D-N.Y.-is a signal of how far the party is willing to go in challenging the pro-Israel community, a relationship that not so long ago was hard to disentangle.

"It sends the wrong symbol for someone with those views to take a leadership role in the Democratic Party, especially since the party has been struggling with Israel," said Abraham Foxman, the retired national director of the Anti-Defamation League, giving voice to what many establishment pro-Israel figures are saying without attribution. "Israel has always been a bipartisan issue; this makes it less of one."

Steven M. Cohen, a professor of Jewish social policy at Hebrew Union College-Jewish Institute of Religion, said Ellison's ascent is emblematic of a party seeking to attract younger voters likelier to identify with the Palestinians than with Israel, or at least to see the conflict from both sides. Furthermore, the Democrats are not turning away from Israel, he said, but are more willing to entertain positions identified with the pro-Israel left, as opposed to the major groups and the current Israeli government.

"One can imagine that young Democrats would have no problem with Ellison as chairing their party," Cohen said. "The pressure is on the pro-Israel community to broaden the definition of pro-Israel to include people who oppose settlement expansion and who favor a far more inclusive approach that takes into account Palestinian nationalism."

An operative who straddles the Jewish and Democratic worlds said the relative nonchalance greeting Ellison-the hawkish Zionist Organization of America was among the few groups to issue a statement vehemently opposed to his leadership-should not come as a shock to the pro-Israel community after eight years of tensions with President Barack Obama.

During that time, the pro-Israel mainstream more often than not stood by Israeli Prime Minister Benjamin Netanyahu in his disputes with Obama. These came to a head last year during the rancorous debate over the Iran nuclear deal, when the American Israel Public Affairs Committee spearheaded opposition to the deal that Obama vigorously championed. AIPAC's efforts to kill it were defeated in Congress, along strict partisan lines. The group has gone some way to patching things up with congressional Democrats, but there are lingering ill feelings.

"The legacy pro-Israel groups are not at the table," the operative said, asking not to be named to protect his relationships with the Jewish groups. "If you burn all those bridges, saying 'either you're for Israel's survival or against it,' this is the consequence."

Susan Turnbull, a former vice-chairwoman of the DNC and a former chairwoman of the Jewish Council for Public Affairs, cautioned that Ellison was hardly a done deal. There were other promising candidates, including Howard Dean, who helmed the party in the late 2000s, leading it to two congressional wins; Ilyse Hogue, the Jewish president of NARAL-Pro Choice America, the abortion rights group; and Jaime Harrison, the chairman of the state party in South Carolina.

She said Schumer's backing for Ellison was an attempt to heal the wounds of a divisive primary season, with Schumer representing the establishment that backed the eventual nominee Hillary Clinton, and Ellison representing the progressives who backed the insurgent campaign of Sen. Bernie Sanders, I-Vt.

Turnbull said the state party leaders and officials who vote for the DNC chair might not take well to Schumer's preference, and also may prefer a chair who can deliver full time as opposed to representing a congressional district. She recalled simmering resentments at the previous chairwoman, Rep. Debbie Wasserman Schultz, D-Fla., who often was seen as distracted by her congressional career.

"The more the congressmen and senators are endorsing a candidate and say this is how it will be, the more likely DNC members will be resentful and go the other way," Turnbull said.

Additionally, Ellison's bid has little to nothing to do with foreign policy-he's been baffled by the Israel questions he's received, party insiders say. Instead, he's focused on reviving the party after its devastating losses on Election Day and rebuilding its grassroots support among the working class.

Still, Ellison's history with Israel has become an issue, if only because it features so prominently in his biography.

"The fact that Representative Keith Ellison is even being considered as a serious candidate to lead the Democrat Party tells you how radical and far out of the mainstream they've become," said Fred Brown, the spokesman for the Republican Jewish Coalition.

There are two chapters to Ellison's record on Jews and Israel: Before he made history in 2006 as the first Muslim elected to Congress, and after.

Ellison apologized in detail and made clear he has renounced the "before," which included a stint in the 1990s with the anti-Semitic Nation of Islam. "I have long since distanced myself from and rejected the Nation of Islam due to its propagation of bigoted and anti-Semitic statements and actions of the Nation of Islam, [its leader] Louis Farrakhan, and [Farrakhan's late assistant] Khalid Muhammed," he wrote in a two-page letter to the Jewish Community Relations Council of Minnesota and the Dakotas in May 2006, after he won the Democratic primary.

Republicans and conservatives still evoke that period in attacking Ellison. For Democrats, liberal Jewish groups and the local Minneapolis Jewish community, it is ancient history. He has close and friendly relations with the community there, and has become a robust voice speaking out to Muslims against anti-Semitism within their ranks.

In 2009, Ellison spear-headed a letter from 54 Democrats to Obama urging him to press Israel to ease its blockade of the Gaza Strip. The letter acknowledged Israel's security needs after the Gaza war, but said the country's government was overstating them and suggested it was being punitive.

The same year, he sought to accommodate a more sympathetic reading of the United Nations Goldstone report on the war, while acknowledging it was flawed. Israel, the centrist pro-Israel community and most of the Congress rejected the report as a one-sided attack on Israel and its right to self-defense.

In 2014, he was one of eight members of Congress who voted against additional funding for Israel's Iron Dome anti-missile system, saying he preferred to devote American energies to brokering a cease-fire.

And this year he was one of three appointees named by Sanders to the party's platform drafting committee. All three sought, unsuccessfully, to change its language to be explicitly critical of Israel's West Bank occupation.

That venture especially worried centrist pro-Israel groups, particularly because the Princeton University philosopher Cornel West, one of the other pro-Palestinian advocates, had passionately embraced the boycott, divestment and sanctions movement. While Ellison was allied with groups that reject BDS, like J Street, he had yet to pronounce on it in a forceful way.

In a statement Tuesday to JTA, Ellison rejected BDS as unhelpful.

"I have long supported a two-state solution and a democratic and secure state for the Jewish people, with a democratic and viable Palestinian state side-by-side in peace and dignity," he said. "I don't believe boycotting, divesting, and sanctioning Israel helps us achieve that goal. I supported the Democratic Platform, which embraces this position."

Ellison's defenders also note his record backing defense assistance to Israel, his multiple visits to the country and his backing of Holocaust education in the Muslim community.

Jonathan Greenblatt, Foxman's successor at the ADL, in a statement sought to straddle the warmth Ellison has engendered at home in Minneapolis with concerns about his record.

"We spoke with leadership in the Jewish community in Minnesota who confirmed what ADL and other national organizations have seen: that Keith Ellison is a man of good character," he said in an email to JTA. "We have seen him through his work in Congress as an important ally in the fight against anti-Semitism and for civil rights.

"He has been on the record in support of Israel and supports a two-state solution," Greenblatt said. "However, the congressman also has made statements and taken positions, especially regarding the Israeli-Palestinian conflict and on the [Iran nuclear deal], on which we strongly differ and that concern us."

Steve Rabinowitz, a strategist for the Hillary Clinton campaign who successfully pushed back the effort by Ellison, West and James Zogby, the president of the Arab American Institute, to change the platform language, said Ellison, even though he lost the battle, was key to getting the broader platform committee to accept other language friendly to Israel.

Schumer, in endorsing Ellison, credited "Ellison with making that happen and getting others to support it," Rabinowitz noted.

Rabbi Marc Schneier, whose group, the Foundation for Ethnic Understanding, has worked with Ellison to advance Muslim-Jewish understanding, said Ellison's differences with mainstream pro-Israel groups should not blind the groups to the value he brings as a youthful African-American Muslim who speaks out for engagement with Israel.

"He is a Muslim, and the fact he has sympathy for the Palestinian cause-that would be a normal reaction on any American Muslim," he said. "But this is also an American Muslim leader committed to a two-state solution."

For his part, Schumer said his priority was finding a DNC chair who would act as an "organizing tool" for his party-following advice from Sanders, who told him the Democrats "can't win the wars" without being bolder and more progressive at the grassroots level.

Asked by he Washington Post Friday about Ellison's past statements on Israel, Schumer replied, "I'm not worried about the Israel stuff even though he and I disagree."