'Lobby moments' in the search for my ancestors 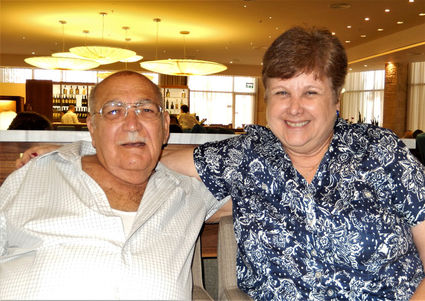 In just a few short months, we will have the world's foremost experts on Jewish genealogy converge on Orlando for a wonderful week of discussion and sharing. That's the 37th International Conference on Jewish Genealogy, from July 23-28, 2017, at the Walt Disney World Swan Hotel. One of the great benefits of attending the conference is one's proximity to experts. Besides being able to ask questions of speakers at their presentations and networking sessions, you also have direct access to them during the conference.

I have had two fabulous "lobby moments," 23 years apart. My first conference was in 1992 in New York. Back then it was called the 11th Summer Seminar of the Jewish Genealogical Society: The New York Jewish Experience. I was just beginning to explore my ancestry, interviewing relatives, using paper charts, reading "Avotaynu" and attending the Jewish Genealogy Society meetings in Washington, D.C., where I lived at the time.

I knew very little about my grandfather, Jacob Chasan, who had died at age 34 in the Influenza Epidemic in 1918. My father was a baby at the time. Older cousins related to me how they felt their lives might have been different "if Jack had lived." All I had of him was one photo and his Naturalization Certificate.

Here was the first "lobby moment": I saw a few people asking questions from one of the conference organizers who was sitting in the lobby. I waited to ask his help with the Naturalization Certificate. He took a quick look at the information and told me that the Surrogate Court, which had granted the naturalization, was just a few blocks from our conference hotel and gave me directions.

I made my way there, showed the certificate to the clerk, and no sooner had I settled in my chair, when the clerk placed a thick bound volume in front of me, opened to the original documents my grandfather had submitted: the Declaration of Intent and Petition for Citizenship.

That was an incredible high. To hold in my hands the same papers that my grandfather had completed was indescribable. What a connection I felt to this long lost ancestor! In the papers I discovered his birth date, the port he had sailed from, the ship he arrived on, his address and occupation in New York, and even the names of the witnesses, some of them relatives. The clerk made copies for me.

Back then you couldn't plug a name into Ancestry.com and find the ship records. You had to spend hours slowly winding through the microfilm readers. Armed with information from the certificate, I headed to the New York Public Library where I was able to find my grandfather Jacob Chasan listed on page 70 of a microfilmed passenger list. He had come from Bialystok in 1901 when he was 17.

Fast-forward 23 years to my second "lobby moment" at the 35th IAJGS Conference on Jewish Genealogy in Jerusalem in July 2015. At this conference, I was hoping to meet cousins from Bialystok who had settled in Israel. I had been seeking them for many years and had some very old addresses.

I arrived a day early on Saturday, July 4th. The next morning I saw conference chairman Michael Goldstein in the hotel lobby. I had emailed him a few months earlier to ask if he could recommend someone to help find my relatives. To my delight he said he had time right then. Using Michael's laptop we looked up the numbers in the online Israeli phone directory. He figured out which people could likely match my old information. At 1 p.m. he made the first call. We found my relatives and Michael did all the translating. They were delighted to hear from me. By 4 p.m. that same day my 82-year-old second cousin, Yegal Zlotnik, and two of his children showed up at the hotel. They lived just 10 minutes from the hotel. When I hugged Yegal we didn't want to let go. It was another indescribable moment and another deep connection come to life. We spent a lovely two hours getting to know each other in the expansive lobby bar. 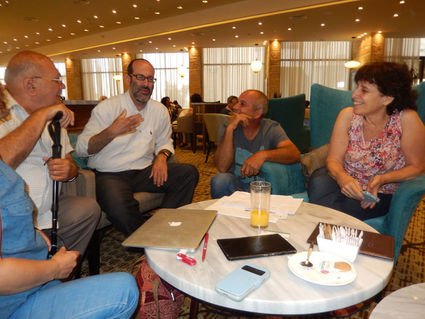 A reunion in Israel with long lost cousins, reunited through a Jewish Genealogical conference in Israel.

A few weeks earlier, volunteers with the conference reunion committee had located some of my other cousins from Bialystok. I had made plans to meet them later that night. This group came while my cousin and his children were still there and we had a family reunion I had hoped for. I met the first group of cousins twice more during the week, and they drove me to meet another 92-year-old cousin in Tel Aviv. And I had Shabbas with the second group. I have filled in the family tree for my Chasan relatives in Israel and keep in touch.

You can learn how to access many important resources at the Jewish Genealogical Society of Greater Orlando's (JGSGO) My Jewish Roots workshops. The next one is Conduct U.S.-based Research featuring IAJGS President Marlis Humphrey on Tuesday, Dec. 6 at 7 p.m. at the Roth Family JCC. The workshop is free and open to the public. Bring your own laptop to participate in the lab portion. It is also possible to attend via the Internet. Pre-registration is required. Pre-register for either in-person or online participation at http://www.jgsgo.org/MyJewishRoots.