Meet the cast of 'Out of the Apple Orchard' 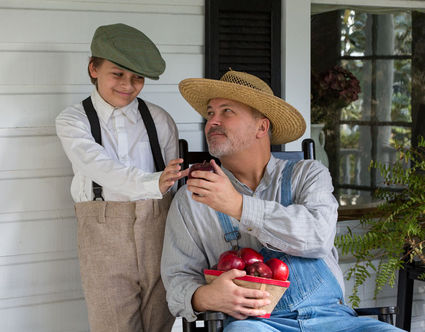 Jeremy Kleckner (l), who plays the lead role of Adam, and Tommy Wooten, who is cast as Mr. Friedland, the farmer.

The first person cast for the Orlando premiere of "Out of the Apple Orchard"-which opens Dec. 19 at the Orlando Repertory Theatre-was Jeremy Kleckner in the lead role of Adam Bieman, the 12-year-old boy who is hungry and steals apples from an orchard.

To author Yvonne David, who was inspired by Charles Dickens' "A Christmas Carol" when she wrote the book, and through various happenings along the book's journey to becoming a play, it seems the ghosts of Christmas' past have continually popped up.

"Imagine my surprise when I was reading Jeremy Kleckner's Facebook page only to find out that he will be playing Tiny Tim in 'Christmas is Comin' Uptown,' a play loosely based on Charles Dickens' 'A Christmas Carol,' just before he takes on the role of Adam Bieman in 'Out of the Apple Orchard,'" remarked David. "What an uncanny connection!"

Other cast members include Sarah Jones, a well-known artist and entertainer at Universal Studios Entertainment, who will play the part of Mama. Doug Bowser, of Wanzie and Doug fame on RealRadio 104.1's the Phillips Phile, will portray Papa. Jessica Hoehn will be playing two parts-Mrs. Friedland, the farmer's wife; and Miss Elliot, the school teacher. Orlando veteran to the theatre stage, Tommy Wooten, will play the farmer, Mr. Friedland; and Josh Lefkowitz, who won a best supporting actor award from Broadwayworld.com for "To Kill a Mockingbird" at the Orlando Shakespeare Theater, plays one of Adam's friends.

The play is directed by Tony award-winning producer Kenny Howard. He is a graduate of UCF, serves on the board of The Orlando International Fringe Festival and is the education director of Florida Theatrical Association and artistic director of The Abbey in Orlando. He co-founded Broadway Consortium, LLC and Broadway Records and during the time he was managing member of both companies, he was nominated for 5 Tony Awards, 6 Drama Desk Awards; and two of the over 20 albums he was executive producer of also were nominated for two Grammy Awards.

Helping the hungry during the holidays-as the play reflects-is especially important to David. The net proceeds of the Orlando premiere will benefit Jewish Family Services of Orlando and St. Vincent de Paul Society.

Not to be forgotten, is the set designer, the Jewish community's own Bonnie Sprung, who worked as the set designer for the JCC Center Players, and is "very happy to be designing this wonderful holiday story."

Sprung has a BA from Hofstra University in Set Design and Graphics, along with her AA from Valencia Community College in Fine Art. She has done set design, scenic painting, make-up and stage management for over 200 shows in Orlando and New York. Stage Manager, Sound and Graphics for Summer Winds Theatre. She has also designed for GenY Productions, First Academy Middle and High School, Westridge Middle School, Boone High, Lake Brantley High and Central Florida Community Arts. Currently she is on the Seminole Cultural Arts Council Board.

"Out of the Apple Orchard" will open on Monday, Dec. 19 at 7:30 p.m. at the Orlando Repertory Theatre, 1001 E. Princeton Street, Orlando. Further performance dates and times and ticket prices can be found at http://www.appletreeseries.com or by calling 407-437-4909.