By Jane Edelstein
The Jewish Pavilion

Ethical dilemmas and so much more 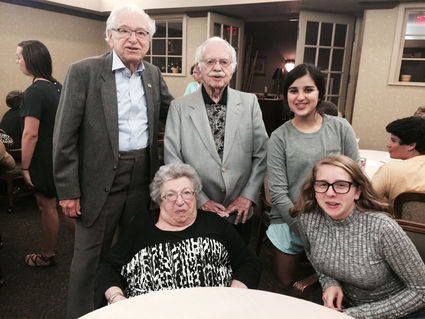 Discussing ethical dilemmas at a recent Jewish Pavilion/COS program were (back, l-r): Fred Cohen, Robert Geller and Gilly Shisgal; (front, l-r); Rita Geller and Shayna Danuff. The program was held at the Village on the Green senior-living community.

You are selling your car. A prospective buyer offers your advertised price of $4,500. You say yes. It's a verbal acceptance. A few minutes later (before anything is put in writing), another prospect arrives and offers you $5,500. Do you honor your acceptance to the first buyer, take the higher offer from the second person, or attempt to negotiate for more money from the first buyer?

This is just one in a series of ethical dilemmas discussed recently with a teen group from Congregation Ohev Shalom and a group of seniors at Village on the Green senior living community. Four groups, each comprised of both teens and seniors, debated ethical issues-finding that there are no easy answers to difficult questions. "I'd like to be outspoken more and stand up for what's right," noted one female high school student, talking on the subject of bullying. "But it's so hard. Even if it's wrong, it's easier to be quiet."

"Quiet" was not a word to describe the group discussion, however. On a question relating to telling "a little white lie" regarding lying about age for a reduced rate ticket, one senior noted that she doesn't mess with the truth. "It's a matter of kavod-of showing respect (to self and others)," she noted. Across the room, a teen agreed with her, but added that in real life, there's a lot that's not so black-and-white. "Yeah, I might really need the money for school," he said.

A big conclusion from the entire group was the need for anyone to adhere to time-tested values such as truth, integrity and even tikkun olam (repairing the world). "Sometimes you have to prioritize the values that are at stake," noted Amy Geboff, director of COS's Youth and Family Education and moderator of the program. "You might have to actually think about which action will cause the least harm."

This program was one in a series of inter-generational programs sponsored by The Jewish Pavilion and Ohev Shalom synagogue. The Jewish Pavilion program was supported by generous funding from The Cherna Moskowitz Foundation; Ohev Shalom's "Dinner, Daber and Dvar" is in conjunction with JTEN of the Jewish Federation. At the request of both teens and seniors, a next program posing ethical dilemmas is scheduled for next month.