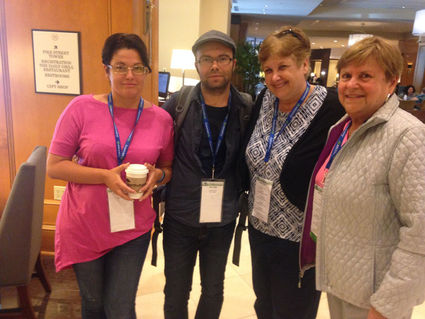 I started my genealogy research 18 years ago with the information I had available-not much. My maternal grandparent's marriage record included the names and birthplaces of their parents. The name for that great-grandfather, Joseph Rosenberger (1851-1899), happened to be the same as my mother's brother, so I felt I was on the right track. I was not aware of my great-grandfather having any siblings on either side of the Atlantic, and could find no mention of siblings in any census records since his arrival in 1869. The birthplace information in the marriage record of my great grandparents immediately took me from New York City, where most of my known family lived and where I had focused my research, to a place called Zebau, Austria. The family lore was that my grandfather's family was German, but much as I looked in the New York records for further documentation of that, I could find none. I finally went to the JewishGen.org's Town Finder/Jewish Communities Database to discover that Zebau was the name of the town back when it was part of the Austro-Hungarian Empire, but it was now Cebiv, in the Bohemian region of the Czech Republic. I joined the Austria-Czech SIG (Special Interest Group) on JewishGen.org to see if I could learn more.

After another few months of making no progress, and not envisioning an overseas trip with so little information to go on, I learned through the SIG of a genealogist in Prague who could be engaged to do research. I emailed Julius Muller what little information I had. The combination of Julius' expertise and the well-kept Czech records yielded a substantial family tree going back to 1742, the year of the birth of my fourth great-grandfather, also Joseph Rosenberger. Julius' research revealed that my great grandfather had three brothers.

Several years later, my husband and I travelled to Prague on a vacation visit. I engaged Julius to take us to Cebiv where the Rosenberger family had lived and to the house in the early record. One history lesson learned-the town of Cebiv is located in what was referred to as Sudetenland, border districts with Germany that were part of Austria until the end of World War I and formerly inhabited primarily by ethnic German speakers. When Czechoslovakia was reconstituted after the Second World War, the Germans were expelled and Czech speakers moved in. Therefore, no one living there now has any knowledge from the time my family lived there. Nor, for that matter, did they have memories of any of the Jews that had lived there and their fate during the Holocaust. The house still existed on a small property. I was glad to be able to see it and the area, but without family there, it didn't come alive for me. We also visited a nearby cemetery-sadly neglected of course. The rain dampened my ability and enthusiasm to examine the graves more closely, though I did locate matzevoth of some family members.

Having the family records Julius found dating to 1742, along with what I found in Cebiv was most exciting. There were clearly family members left behind when my great grandfather immigrated to the US. I really didn't know where to start to look for them. How had they fared in the Holocaust? Were there survivors or subsequent generations? The Yad Vashem database yielded some names that I could tentatively connect, but the writers of those testimonies had since died. Time passed. The brick walls remained, and I put genealogy aside for another day. 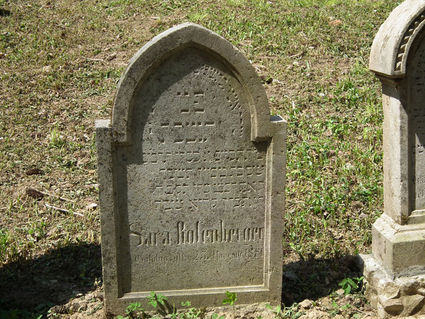 Matzevah of Sara Rosenberger (nee Kohner), third great aunt, birthdate unknown, date of death Nov. 23, 1881. Sara was buried in the same cemetery as her husband and two of his brothers who were siblings of my second great grandfather. It was restored and reset in the Jewish cemetery of Bezdruzice by the Tachov Archives and Museum Society in the Czech Republic, whose Chairman, Václav Fred Chvátal, was one of the translators at IAJGS 2016. This important contact enabled me to add some tangible documentation to my family history, and makes my ancestors a bit more real.

Retirement in June 2016 allowed me to fulfill my promise to myself to get back to the family tree. I registered for the IAJGS (International Association of Jewish Genealogical Societies) 2016 Conference in Seattle, put my family names in the Family Finder part of the registration, and sat back to wait for July. I was then contacted by Randy Schoenberg, the lawyer renowned for his successful fight against the Austrian government to reclaim Klimt paintings for the Ferdinand and Adele Bloch-Bauer family. Schoenberg is moderator of the Austria-Czech SIG on JewishGen.org. He persuaded me to join Geni.com, for which he is a "curator." Energized by the speakers and exhibitors at the IAJGS Conference, I returned home to tie myself to the computer for days on end. When I put my information in Geni.com, I found that we are indeed cousins. In addition, I have found more cousins and connections to a substantial part of the family that I never knew. While there are still a few family puzzles to solve, and some sadness to see how much of the family had perished in the Holocaust, I have found new cousins to engage with and perhaps to meet in the years ahead.

You can learn how to access many important resources at the Jewish Genealogical Society of Greater Orlando's (JGSGO) "My Jewish Roots" workshops. The next one is "Native Country Research" featuring IAJGS President Marlis Humphrey on Tuesday, Jan. 3 at 7 p.m. at Central Florida Hillel, UCF, 3925 Lockwood Blvd., Oviedo. The workshop is free and open to the public. Bring your own laptop to participate in the lab portion. It is also possible to attend via the Internet. Pre-registration is required. Pre-register for either in-person or online participation at http://www.jgsgo.org/MyJewishRoots.